I was enjoying the late summer sunshine in my front garden, sitting on the driveway in our fancy new double seat with a table in its middle, when I noticed a bee crouching on the tarmac a few metres away.  It was as big as a mouse.  A small mouse.  Its body was a beautiful deep tawny colour, with a black band across the middle, like a unistripe tiger.  It seemed sluggish, unwilling or unable to move.  I was concerned that our visitors, due to arrive any time, would run it over when they drove through the gates.

I returned to the Guardian, and a curiously tedious piece by Jonathan Franzen on Karl Kraus, which seemed to be more about Franzen.  I remembered the bee, and it was no longer there.  I looked around – it had moved down the drive and was just by the open front door, examining a fallen dead leaf.

It crawled slowly on to the leaf, and relaxed there.  It looked like a life-raft.  The bee turned around and tucked its head under the curled edge of the leaf.  It seemed to fall asleep.  My wife returned from her bike-ride into town and I showed her the bee.  She wondered if it was ill or dying; maybe it had stung somebody, she suggested, and was moribund.  It was certainly not very vivacious. 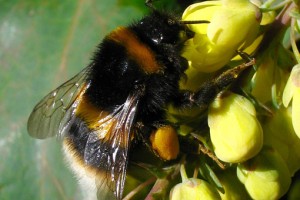 I read the rest of the review section of the Guardian.  Twenty minutes must have passed.  I noticed the bee walking slowly back up the drive.  It stopped halfway up.  The wind had dropped and the sun was beating down warmly.  The bee seemed to bask.  It rubbed its furry body with a long black back leg.  After a few minutes it took off like a helicopter and flew vigorously away, sluggish no more. 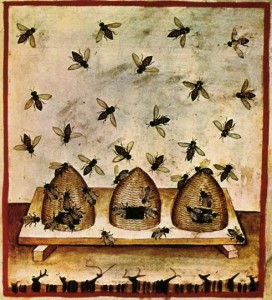 I looked them up online: it was possibly a bumblebee, judging by the images I found (as posted here).  I discovered the phenomenon of the ‘Zombee’: honey bees that have been parasitised by the Zombie Fly Apocephalus borealis.   They behave as if intoxicated, displaying zombie-like behaviour such as nocturnal departures from their hives on a ‘flight of the living dead’ (from a depressing website called ZomBee Watch).

I don’t think mine was a zombee, though I feared for his state of mind until he took off so brashly.