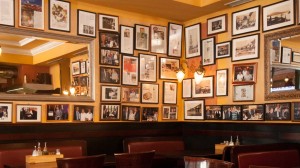 There’s me, my wife and son – all English; his wife and her parents – Chilean; and her Turkish-German friend.  We’re in Hasir on Oranienburgerstrasse, one of a small chain of excellent Turkish restaurants in Berlin, eating meze.  It was just before Christmas a couple of years ago.

This is Mitte, the heart of former East Berlin.  Before the Wall came down in 1990 this was the dour sector of the city; now it’s more vibrant than the commercial West: the excesses of Potsdamer Platz and the Ku’damm shopping street.

Our dinner party typifies the multicultural diversity of the new Berlin.  Son and daughter-in-law are DJs who make music in a studio in the former Tempelhof Airport.  Up the road from his flat we stop for a coffee in an Italian cafe, where they make a wicked mozzarella and tomato ciabbatta sandwich, and coffee as good as anywhere in Berlin.

He leaves for work, so I continue my dérive alone into four-lane Bernauerstrasse, which used to mark the border between East and West.  This is the History Mile of the Berlin Wall. 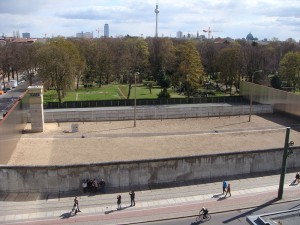 On the left is a graveyard, and a row of rusting girders, vertical remnants of the Wall, now a stark memorial to that divided time.  The former ‘death strip’ between Brunnen and Gartenstrasse has been preserved.  The Berlin Wall Memorial is in the middle of this section.  Sixty meters of the   strip were preserved.  The memorial grounds are beside the Visitors Centre by the Nordbahnhof S-Bahn station. Plaques announce how the barrier grew more imposing over the years, the people who died attempting to cross it.  Dogs patrolled the death strip, wires attached to their collars and to the perimeter wire, so they could run freely alongside the wall, but not away from it. 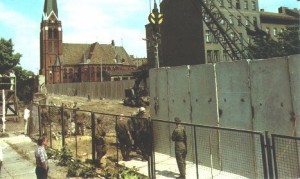 I walked on through the outdoor exhibition and crossed over to the Documentation Centre, which houses a fascinating guide in pictures, film and text to the history of the Wall.   Climb to the viewing platform where you can see over the whole area, picturing how it would have looked.  A whole terrace of apartment blocks was demolished to create the strip.  In 1985 the DDR dynamited the Versoehnung (Reconciliation) Church there to facilitate their expansion plans for the wall; a neo-Gothic structure consecrated in 1894, it stood in the death strip in the Soviet sector – since 1961 its congregation had been unable to gain access to it.  A modern chapel has been built on its site. 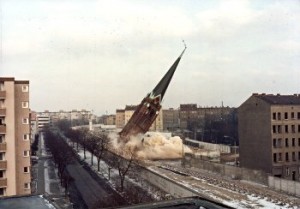 It’s a cruel history which Berlin presents in sombre openness.  This is maybe what makes it such a stimulating city; its diverse, talented inhabitants seem aware that life in Berlin requires something special from anyone who enters it: be inquisitive, keep your eyes open, and you will feel what it is to be fully human – flawed, inclined to be dangerous, capable of being sublime.

Next day the snow has fallen.  Miniature snow-ploughs keep the pavements clear; bigger ones keep the streets passable.  A fire-engine arrives over the road; we watch entranced as a fireman is hoisted to the full extent of the hydraulic arm.  He reaches up and knocks from the eaves of the three-storey building a huge icicle.  Berlin won’t risk pedestrians being flattened by ice-fall.  Nowadays it’s an efficiently caring city.

5 thoughts on “Berlin: meze, the Wall and reconciliation”