The novella ‘Zooey’ completes the book Franny and Zooey by J.D. Salinger, and was first published in The New Yorker in 1957, then with the short story ‘Franny’, about which I wrote recently here, in book form in 1961.

Its first section takes place bizarrely in the bathroom: Zooey, an exceptionally good-looking 25-year-old actor, soaks in the bathtub, smoking and reading a long letter from his older brother, Buddy, which had been written four years earlier, and a script for a TV drama.  When his mother enters he’s irritated but wryly amused; a long conversation ensues, with Zooey screened behind the shower curtain while his mother sits on the toilet seat and, like her youngest son, smokes continuously.  The precocious Glass siblings all address their parents by their first names; Bessie has come to report her concerns about the spiritual and emotional breakdown of her youngest daughter, 20-year-old Franny.  The story ‘Franny’ serves as a kind of prologue to this novella – it shows her argument with her cynical, poseur boyfriend Lane, and her existential distress. 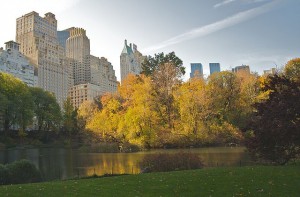 Now she has come home to the shabby genteel Manhattan apartment where the Glass parents live, and has taken to the sofa with her scruffy cat Bloomberg, and sleeps and frets there like a latter-day Elizabeth Barrett, refusing to eat or do anything.  When Bessie urges Zooey to do something about his sister’s emotional collapse, he banters with and teases her, repeatedly ordering her to leave and afford him some privacy.  Bessie, like most of her children, is an eccentric, and accepts his breezy irony calmly, simply wondering how Zooey turned out so like his older brothers and they all lost their sweet innocence.

In the second part of the story Zooey has dressed and entered the living room to speak to Franny.  Their conversation is also lengthy.  He questions her motives for adopting the ‘ceaseless prayer’ mantra of the Pilgrim book (which I described in the previous post), upsetting her deeply.

He then retreats to the former bedroom of his older brothers; Seymour had committed suicide some years earlier, and his spirit haunts all of the surviving family.  Buddy has moved north and become a teacher (a foreword to the story written from his perspective suggests that he is the true ‘author’ of this story).  The story ends with Zooey tapping in to the spiritual wisdom of Seymour in order to get through to Franny.

The narrative fizzes with colloquial vigour, but the dominant voice, Buddy-Salinger’s, is literary and sophisticated.  The dialogue, as in ‘Franny’, is witty and animated, with carefully placed emphases to show up the speakers’ intonation and character – this is Bessie in full flow, complaining that her husband isn’t taking enough interest in Franny’s spiritual-emotional breakdown:

Right after the eleven o’clock news last night, what do you think he asks me?   If I think Franny might like a tangerine!  The child’s laying there by the hour crying her eyes out if you say boo to her, and mumbling heaven knows what to herself [that’ll be the Jesus Prayer], and your father wonders if maybe she’d like a tangerine.  I could’ve killed him.

Later, after another plaintive request from Zooey that she leave the bathroom and let him complete his ablutions in peace:

Everyone in the Glass family – Zooey certainly not least – was familiar with this sort of nonsequitur from Mrs Glass.  It bloomed best, most sublimely, in the middle of an emotional flareup of just this kind.

Although the narrative teeters occasionally on the brink of tweeness or whimsy, as here, Salinger manages to infuse sufficient seriousness to hold it all together: Franny’s crisis is real, and despite his laconic sarcasm, Zooey’s love and concern for his little sister is palpable.  Similarly the mystic theme, as in ‘Franny’, because it’s treated by Zooey with such scepticism, doesn’t become intrusive or embarrassing.  This is Zooey who, like Franny, is having a bit of an existential crisis of his own; he hates the arty-creative TV types he has to mix with:

They’re as happy as pigs till I show up.  I feel like those dismal bastards Seymour’s beloved Chuang-tzu warned everybody against.  “Beware when the so-called sagely men come limping into sight.”’  He sat still, watching the snowflakes swirl.  ‘I could happily lie down and die sometimes,’ he said. 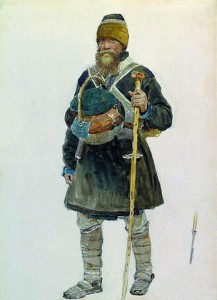 Ilya Repin (1844-1930), watercolour study of a pilgrim; in the State Tretyakov Gallery, Moscow

He accuses Franny of indulging in an emotional ‘Camille routine’,  and is ironic about her love of Epictetus and Emily Dickinson; he’s also dubious about her commitment to the Jesus Prayer business:

‘But I still say I don’t like it.  It’s rough on Bessie, it’s rough on Les – and if you don’t know it yet, you’re beginning to give off a little stink of piousness.  God damn it, there isn’t any prayer in any religion in the world that justifies piousness.  I’m not saying you are pious – so just sit still – but I am saying all this hysteria business is unattractive as hell.’

As an antidote to the plotless metafictions I’ve been reading lately Franny and Zooey works well; it’s slight, a little pretentious (all those quotations from Kafka and oriental mystics on the bedroom door of Seymour and Buddy’s old bedroom), but beautifully crafted, and a highly rewarding read.

All pictures from the public domain, via Wikimedia Commons