I wrote about Anna Kavan and her story collection Julia and the Bazooka on this blog yesterday.  Born in Cannes in 1901, Kavan died in 1968.  The Parson was discovered among her papers and published posthumously.  It seems to have been written in the late 50s-early 60s.

This is a good, bad novel.  The plot is lurid noir; a ‘most improbable meeting’ leads to a liaison that erupts in a wild, sinister northern land between two opposites: an innocent young army lieutenant called Oswald, a native of this land, and the glamorous femme fatale from the south, Rejane, ‘like the heroine of a romantic story, beautiful and extremely rich’.

These words from the opening paragraphs of the novel reveal its weaknesses.  The structure is contrived, the plot overheated to the point of ridiculousness.  Yet somehow it works as a short, compelling  piece of fiction.

There is a genre of novel which deals with decent men who hook up with bad, mean women who do them wrong, from Parade’s End (Ford Madox Ford) to the Sword of Honour trilogy (Evelyn Waugh) and beyond.  But this time the author is a woman, and there’s a different take on the format. 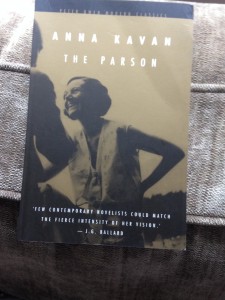 The mismatched lovers are straight out of B-movie central casting.  Oswald is described on the opening page as a ‘tall, athletic young man, whose skin was tanned much darker than his fair hair’.  Rejane is attracted to him by his ‘good looks’ (modified seven lines later to ‘severe good looks and superb physique’), and a ‘puzzling’ quality she discerns in him, ‘something incongruous that required explanation.’

In the blond north, in that remote and unlikely setting, Rejane’s dark beauty was quite extraordinary, with its sensuous contrast of pale flawless skin and almost black hair and eyes.  Her complexion was pure magnolia.  And her hair fell in soft, dark waves that always looked perfect and perfectly natural…

The ‘glamour’ of this Lamia enchantress is apparently that of a ‘charming and lovely girl’, ‘unspoiled by money and adulation’.  Although the narrator grimly reveals that this impression is ‘misleading’, vulnerable Oswald is smitten, unable to resist.  The clunky contrast of blond/dark, innocent/experienced is overstated – but this is not a realist novel.  Just look at that knowing repetition of the ambiguous ‘perfect/perfectly’.

The melodramatic stage is set for a soul-bruising brief encounter.  Kavan is capable of much better writing than this sub-Mills and Boon tosh, fortunately.

Oswald’s nickname had been acquired in his tropical posting because of his refusal to respond to the army wives’ brazenly seductive advances.  He did so out of a mixture of loyalty to his fellow officers and sense of duty to his family.  In that morally tainted environment his comrades began to turn against him, finding his behaviour towards the wives they know are serially unfaithful an insult.  The nickname ‘The Parson’ became increasingly used as a sneer.

We’re told insistently that he’s no woman-hater, but that he has an ‘idealized notion of womanhood that made the promiscuous sexiness of the young wives so repulsive to him.’  Really?  Then we’re told he was ‘singularly innocent…without being in any way prudish, priggish or epicene.’  Perhaps Kavan protests too much.  He may not be gay, but he’s repressed.

He becomes lonely, unhappy and isolated, a misfit outsider.  Full of longings that ‘only a woman, he knew instinctively, could satisfy’ he returns to his Nordic homeland on leave.

His loving mother and downtrodden, resentful sister fail to provide the support and comfort they had done in the past.  It is in this setting that Oswald experiences the coup de foudre when he first sees Rejane in her hotel lounge.

He timidly offers to show her the wild beauties of this barren land of tors and moors.  Intrigued and amused by his adoring air of ‘respect and profound devotion’ – she’s clearly more used to less gallant sexual advances, and has a lover back home whom she’s temporarily punishing by taking this unlikely trip to the north – she leads him on.  She’s surprised and slightly disgusted at his failure to attempt to seduce her.

Her pleasing, unaffected façade, the pretence that all her beauty and wealth made her no different from other people, concealed the implacable underside of her character, and an obsession with self that was truly phenomenal.

Her ‘narcissism’ and ‘glorified self-image’ cause her to believe she’s a superior being, ‘almost as though she possessed supernatural powers.’  At no point does the narrative simply ‘show’ us these characters; we are ‘told’ constantly how to assess them – yet strangely this is done with such endearing venom that it doesn’t matter.  Kavan isn’t trying for psychological depth or realism; this is the polarised world of saga and folk-tale.  Rejane is a ‘malevolent’ Wicked Witch or a Lamia – and her sinister, witchlike, reptilian qualities are frequently alluded to.  In his innocent, almost virginal worship of her Oswald flatters her ‘dream-self’ so that she is able to enjoy feeling his placing her on a throne or pedestal.

She is experienced and cynical enough to know that he loves her, but thinks he might be ‘afraid of love in the physical sense’ – he’s transforming her into a goddess.  Her ‘queenly enchantress-self’ enjoys this, but her rational self finds him laughable, even contemptuous:

That there was something witchlike about her, Oswald’s instinct had told him, warning him off.  He had ignored the warning, already infatuated by this dangerous charmer; but if he’d seen that inhuman look of mocking, cold-blooded amusement, his chivalrous soul might have taken fright.  However, he was unsuspecting and saw nothing.

Despite this purple prose, the narrative becomes more interesting from this point.  The perspective alternates between the two characters: first we see what’s going on inside Rejane’s head, then Oswald’s.  It lifts the creaky plot into a more interesting zone.  Occasionally the narrator then shifts into a neutral space between them, to pass crushing judgement:

‘How do you like our tor?’ Oswald asked, turning his blond head to beam at her warmly and protectively – he might as well have beamed protectively at a tiger.

During his month’s leave Rejane indulges him.   Just as the army husbands felt insulted by Oswald’s rejections of their wives, so Rejane feels his restraint is insulting, and she resolves to ‘teach him a lesson.’  Her contempt and ‘jeering malice’ slowly grow. 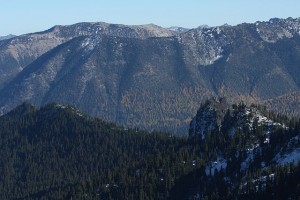 So he drives her in his car through the stark setting of this ‘barbarous’ northern land with which he feels a mystical attachment, as he does to the ‘old stories’ of the moors,

…while she amused herself with her race of imaginary pre-men, half magicians, but doomed to extinction because their development had taken a wrong twist.  Their resentment had spun a venomous web of magic to last as long as the rock into which they’d infused it.

The relationship takes a shocking turn when she insists he take her to a remote, derelict castle.  Oswald finally realises how she really feels about him, and drops his diffident manner dramatically.  They both lose track of sanity.  The final third of the novel shows how each of them has been transformed by this sexual-emotional crisis, with the narrative point of view entering into each of them alternately with a scalpel’s precision.  This is the most innovative and successful aspect of the novel.

It’s only Oswald who has undergone some king of epiphany, however.  The mask has slipped from her face, and he sees the ‘undisguised witch-like look on her face.’  But the revelation is to have terrible consequences as her indifference becomes openly cruel.

This is a curious novel, but for all its flaws it has an intensity that isn’t too marred by the exaggerated analogies with Nordic sagas and sultry southern gothic belles.  The depiction of Oswald’s tortured grief at the novel’s end after his flash of insight into Rejane’s true nature is powerful and affecting –  it reminded me of the anguish in Joyce’s stream-of-consciousness portrayal of Eveline at the end of her story in Dubliners.

I’d urge you to give Anna Kavan a try.  Just avoid her 1948 novel Sleep Has His House, which I couldn’t finish.

3 thoughts on “Anna Kavan, ‘The Parson’: a critique”