My first post of 2014 is a critique of this intriguing work, which I read back in the autumn, but have just got round to writing about.

WG Sebald, A Place in the Country  (Hamish Hamilton/Penguin 2013)

I have learned to grasp how everything is connected across space and time, the life of the Prussian writer Kleist with that of a Swiss author  [Walser]who claims to have worked as a clerk in a brewery in Thun, the echo of a pistol shot across the Wannsee with the view from the window of the Herisau asylum [where Walser spent his final years], Walser’s long walks with my own travels, dates of birth with dates of death, happiness with misfortune, natural history and the history of our industries, that of Heimat with that of exile.  On all these paths Walser has been my constant companion…the unmistakeable figure of the solitary walker just pausing to take in the surroundings.

In these words from his essay on the Swiss writer Robert Walser, the most engaging to my mind of the essays in A Place in the Country, most of W.G. Sebald’s motifs in this collection and in his other prose writings appear: a preoccupation with place and scenery, especially the rural, littoral and insular, and how history leaches into the landscape (‘everything is connected across space and time’);  with being estranged or exiled from home; and with the tendency for things to be contradictory (witness all those balanced, opposed clauses in the quotation above). 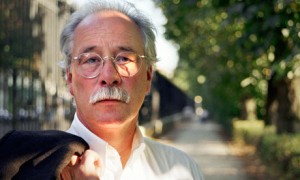 This collection of five essays on writers (and one about an artist, Sebald’s contemporary from the Allgau, Jan Peter Tripp) was originally published in German in 1998; it has been deftly translated into English by Sebald’s former colleague at the University of East Anglia, Jo Catling.  They are not dry academic studies: they are meditations full of understated wit and artistic sympathy with the subjects – but Sebald unobtrusively provides as much insight into himself as he does the subjects.

In the foreword Sebald sets forth his other central theme: he writes of ‘the awful tenacity of those who devote their lives to writing’, of ‘hapless writers trapped in their web of words’:

Evidently the business of writing is one from whose clutches it is by no means easy to extricate oneself, even when the activity itself has come to seem loathsome or even impossible.

All six of his subjects have intertwining connections with each other and with Sebald himself: they mostly spoke a language from the ‘Alemannic’ group, which originated in parts of southern Germany, where Sebald himself grew up, Alsace, Austria and Switzerland.  Most of these artists, like Sebald, were exiles from their homelands, either through their own choice, or involuntarily (in Walser’s case, it took the form of alienation from himself and the world, as he drifted into insanity); they tended to have unhappy love lives and a habit of solitary introspection, from which arose haunting works of literary or artistic beauty.  It is the aesthetic  and moral quality of these artists’ works on which Sebald focuses his attention, but not with soft-focus nostalgia or gloomy introspection: he unobtrusively brings his subjects to life, and illuminates what they mean to him.

Johann Peter Hebel (1760-1826, born in Basel), subject of the first essay, was an obscure eighteenth-century author of popular almanacs, folktales and nature writings.  The poet Eduard Mörike (1804-1875) lived a sequestered life in and around Stuttgart in Swabia (Württemburg).  The other three writers here are Swiss; Jean-Jacques Rousseau (1712-78) came from francophone Geneva; Gottfried Keller (1819-90) and Walser (1878-1956) both wrote in German.  Sebald is interested in artists associated with borders, boundaries and divides, their similarities and struggles.

In 1965 Sebald first saw Lac de Bienne (close to Walser’s birthplace – another of these frequent connections) with its island of Saint-Pierre in the middle.  Years later he visited Rousseau’s insular retreat; Rousseau had been hounded out of pre-revolutionary France, and took refuge there in 1765.  It must have seemed, Sebald writes, a paradise – though Rousseau’s peace was sometimes shattered by unwanted visitors, from whom he hid in an under-floor space covered by a concealed trapdoor.  He spent two months on this island, a sojourn which prompts Sebald to another rueful reflection on the lot of the writer:

One could see writing as a continually self-perpetuating, compulsive act, evidence that, of all individuals afflicted by the disease of thought, the writer is perhaps the most incurable.

In this haven, Rousseau could study nature and get on with ‘the self-destructive business of writing to which he usually submitted himself’.   Another motif in the collection emerges here on this tiny island:

I don’t like large-scale things, not in architecture or evolutionary leaps.  I think it’s an aberration.  This notion of something that is small and self-contained is for me a moral and aesthetic ideal.

From Sebald’s painstaking evocation of the ‘abstruse details’ of the world Walser inhabited, ‘devoid of material possessions’ (he alludes to the ‘pencil method’ or ‘microscripts’ of Walser’s later years, described as an ‘inner emigration’) to the other writers discussed here with their preoccupation with the minutiae of their craft, this statement resonates throughout the collection. 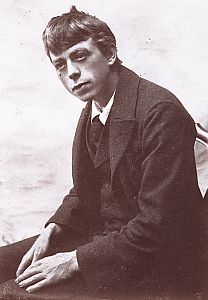 In this essay appears the largest selection in the book of Sebald’s trademark blurred, monochrome photographs; one of them represents his grandfather, who is forever associated in Sebald’s mind’s eye with Walser – the resemblance not just physical but almost mystical; they died in the same year, another of those eerie connections or coincidences which Sebald is so inclined to draw attention to, these ‘rebuses of memory’.   Are they, he wonders, ‘delusions of the self and of the senses’, or

the schemes and symptoms of an order underlying the chaos of human relationships, and applying equally to the living and the dead, which lies beyond our comprehension?

I recommend this volume to anyone interested in the craft of writing (and painting) and the nature of creative artists, with their mysterious capacity for conveying the healing power that comes from exploring the minute details of mundane existence in an increasingly expansionist, chaotic world.  It also provides heart-warming insight into the mind of Sebald.  When I peruse these essays I feel I’m in the presence of a kindly, modest but supremely intelligent artist and thinker, and his prose is a delight to read.  There are really seven subjects: the six I’ve mentioned, and Sebald himself.

6 thoughts on “Heimat and Exile: WG Sebald, A Place in the Country”