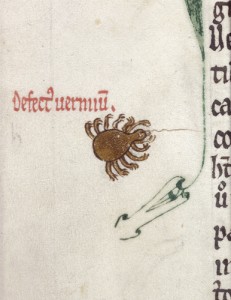 Giraldus Cambrensis, Gerald’s Latin nom de plume, was born at Manorbier Castle, Pembrokeshire, fourth son of William de Barri, and grandson on his mother Angharad’s side to Nest ferch Rhys, mistress of Henry I (youngest son of William the Conqueror), who became, through marriage, mother of the first members of the illustrious and powerful Norman fitzGerald family, which included Maurice, one of the main leaders of the Norman invasion of Ireland.  This began in 1169, and continued under Henry II in 1171.  The Tudor royal family traced its descent from Nest (as did the Stuarts, President JFK and Diana, Princess of Wales). 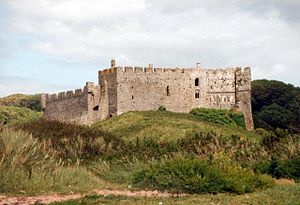 Little is known of Gerald’s upbringing or education.   He became an Archdeacon in 1175, but seems never to have succeeded in his ambition to become Bishop of St David’s.  His first visit to Ireland in 1183 would have enabled him to meet members of his family.  In 1184 he joined the entourage of Henry II, and became tutor to his son John, with whom he came to Ireland a second time in 1185.

The Topographia was composed by Gerald between 1186 and 1188. He produced a second edition before the death of Henry II in 1189, followed by a third, fourth and various ‘late’ editions before his death in 1223.  It is from this text that most of what is known about Ireland in this medieval period derives. 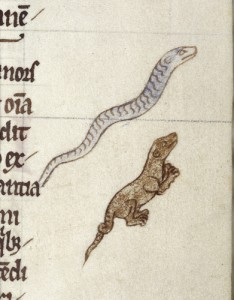 Two snakes, one with legs, f. 11. Gerald reports the absence of poisonous reptiles, including snakes, banished according to legend by St Patrick

Among the wonderful digitised literary resources provided online by the British Library is a description and reproduced photos of the images from BL Royal MS 13 B VIII, date  c. 1196-1223, which contains at ff 1r-34v the text of the Topographia Hiberniae (Topographia Hibernica).  All the reproductions from the Royal MS in this post are taken from the BL site.

The illustrative programme of the BL Royal MS, with its 45 marginal miniatures of animals, wonders and people, was probably formulated by Gerald or under his direct supervision during his sojourn in Lincoln (1196-1198), according to the BL catalogue. There are three other manuscripts of the Topography illustrated with a series of marginal tinted drawings: Dublin, National Library of Ireland, MS 700, Bodleian Library, Laud. Misc. MS 720, and Cambridge University Library, MS Ff.1.27. According to Brown 2002, the Dublin manuscript is the closest to the original copy, whilst this manuscript, produced in Lincoln, probably in Gerald’s presence (1196-1198, or 1207-1208) is the earliest known.

Full-page image of f. 8v, with crane and barnacle geese (see also below)

The Topographia is divided into three parts: Landscape, flora and fauna (which I shall focus on in this post); the Wonders and Miracles of Ireland (supposedly witnessed by Gerald first-hand, or else reported to him orally by reliable sources).  This is the most interesting part of the book, and the one I shall focus on next time.  Part 3 deals with the Inhabitants of the country, their history and culture.

In his introduction to the Penguin Classics translation from the Latin, John O’Meara scathingly describes Gerald’s account as indicating ‘the single-minded flattery of an ambitious flatterer’ (the text is fawningly dedicated to Henry II by his ‘Silvester’ or Merlin-like prophet), ‘the haughty contempt of one who came with his family to reform and invade, and the apparent credulity which must have delighted the hearts of the Irish’.  He writes in a lively rhetorical style, and embellishes almost every aspect of description with allegorical Christian moral tags.

In Part I there are several unusual claims about Ireland’s flora and fauna.  There are bees, he says, but they are not plentiful, for they are ‘frightened off by the yew trees that are poisonous and bitter’.  Here in talking about the sources of stories about who first brought bees to Ireland he makes a statement similar to those found in numerous works of medieval hagiography about verisimilitude:

Neither would it be strange if these authors sometimes strayed from the path of truth, since they knew nothing by the evidence of their eyes, and what knowledge they possessed came to them through one who was reporting and was far away.  For it is only when he who reports a thing is also one that witnessed it that anything is established on the sound basis of truth. 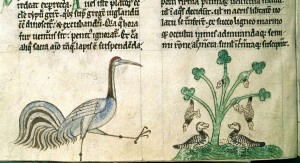 There are no poisonous creatures in the island.  Cranes, he says, are numerous; O’Meara thinks Gerald might be mistakenly identifying herons here.  They stand on one leg, he says, ‘while in the other featherless claw they hold a stone’.  They do this so that if they fall asleep the dropping of the stone into the water will wake them.

He writes of the barnacle geese in the island what is described elsewhere in medieval bestiaries: that they hatch from shells sticking to seaweed on logs in the water (see the picture above).  Here he claims to have seen with his own eyes up to a thousand such hatchings; surely he was taken in by the popular belief that barnacles washed up on shore flotsam were incubating goose embryos.  Religious folk at the time felt it reasonable to eat the flesh of these geese ‘without sin at fasting time’, as they were regarded as more akin to fish than flesh. 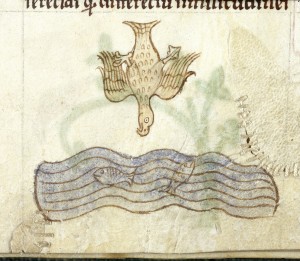 Ospreys, he says, have talons on one foot for snatching prey, but the other ‘is closed and peaceful and suitable only for swimming’.  Kingfishers when they die, if kept dry, will not putrefy, Gerald claims.  Keep such corpses among your clothes and they will keep the moths away.  Storks, he thinks, are black, whereas crows are not: they are of many colours. 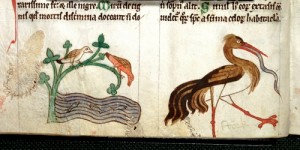 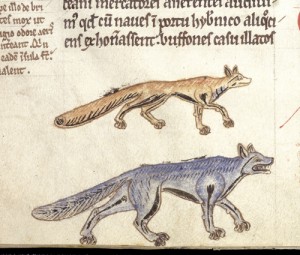 Fox and wolf, the only ‘harmful’ creatures in Ireland, according to Gerald, f. 11v

There are badgers (or ‘melots’) but no beavers in Ireland, he asserts.

Part Two of this post will deal with the second and third sections of the Topographia: werewolves and priests, bearded women and other wonders.