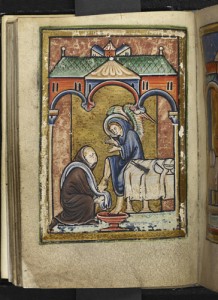 From Ch 7 of Bede’s Life of Cuthbert: It chanced that Cuthbert was appointed to the office of receiving strangers, and he is said to have entertained an angel of the Lord who came to make trial of his piety. For, as he went very early in the morning, from the interior of the monastery into the strangers’ cell, he found there seated a young person, whom he considered to be a man, and entertained as such. He gave him water to wash his hands; he washed his feet himself, wiped them, and humbly dried them in his bosom; after which he entreated him to remain till the third hour of the day and take some breakfast, lest, if he should go on his journey fasting, he might suffer from hunger and the cold of winter. For he took him to be a man, and thought that a long journey by night and a severe fall of snow had caused him to turn in thither in the morning to rest himself. The other replied, that he could not tarry, for the home to which he was hastening lay at some distance.

Cuthbert exhorted the visitor to eat, but when he returned with freshly baked bread, found him gone, having left no footprints in the fresh snow. 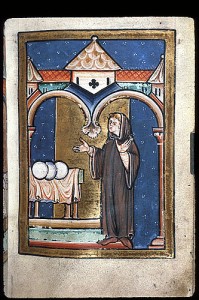 The man of God was astonished, and revolving the circumstances in his mind, put back the table in the dining-room. Whilst doing so, he perceived a most surprising odour and sweetness; and looking round to see from what it might proceed, he saw three white loaves placed there, of unusual whiteness and excellence. Trembling at the sight, he said within himself, ” I perceive that it was an angel of the Lord whom I entertained, and that he came to feed us, not to be fed himself. Behold, he hath brought such loaves as this earth never produced; they surpass the lily in whiteness, the rose in odour, and honey in taste. They are, therefore, not produced from this earth, but are sent from paradise. No wonder that he rejected my offer of earthly food, when he enjoys such bread as this in heaven.” The man of God was stimulated by this powerful miracle to be more zealous still in performing works of piety; and with his deeds did increase upon him also the grace of God. From that time he often saw and conversed with angels, and when hungry was fed with unwonted food furnished direct from God. 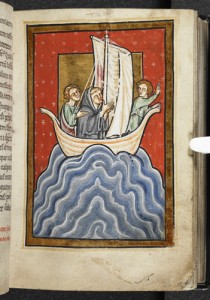 As I posted last time, there are several stories in Bede’s Life that relate how animals or birds fetch Cuthbert food, or else he finds it miraculously provided for him. Ch. 11, for example, describes how he prayed for calm weather and the tempest subsided, allowing him and his brethren to sail safely home. On the shore beforehand   they found three pieces of freshly cut dolphin flesh laid out for them to eat.

In Ch. 19 he admonished birds 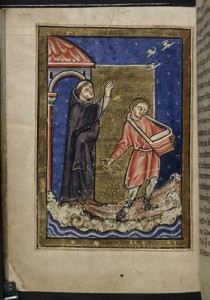 who were eating his barley crop which he had sown by his newly built hermitage on Farne island, and the greedy birds dutifully departed for good. Bede draws from this a typical hagiographical moral, based on saintly precedent:

Thus in two miracles did this reverend servant of Christ imitate the example of two of the fathers: for, in drawing water from the rock, he followed the holy St. Benedict, who did almost the same thing, and in the same way, though more abundantly, because there were more who were in want of water. And in driving away the birds, he imitated the reverend and holy father St. Antony, who by his word alone drove away the wild asses from the garden which he had planted. 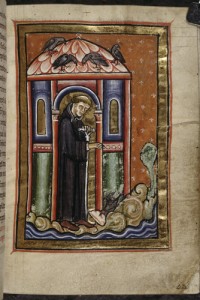 Another sign of his sympathy with the world of nature is related in the next chapter, when crows took straw from the roof of his shelter and were reproved by Cuthbert. Shortly afterwards they returned, making gestures of repentance and sorrow, and dropped at his feet a gift of hog’s lard

which the man of God used to show to the brethren who visited him, and kept to grease their shoes with; testifying to them how earnestly they should strive after humility, when a dumb bird that had acted so insolently, hastened by prayers, lamentation, and presents, to obliterate the injury which it had done to man. Lastly, as a pattern of reformation to the human race, these birds remained for many years and built their nests in the island, and did not dare to give annoyance to any one. But let no one think it absurd to learn virtue from birds… 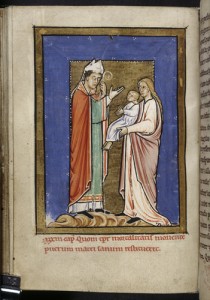 This time Bede’s moral is drawn from the Bible. Other miracles are told of the ‘obedience’ of the sea and other elements to ‘the venerable man’. He is also able to effect miraculous cures of people who are gravely ill. Even ‘brandea’ – items that have simply been in contact with his saintly body – are capable of curing the sick: his shoes, or hairs from his head, or  holy water, oil or bread.

It is a commonplace of hagiography that the telling of a saint’s miracles is calqued upon incidents in earlier Lives; this was not considered problematic in terms of verisimilitude. 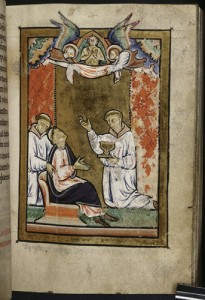 As we have seen in this Life of Cuthbert, the author is at pains to point out parallels with biblical or  hagiographical precedents (early Lives of Gregory famously make this point). It is only in more recent years that the histor or author of a tale felt the need to be original: Shakespeare didn’t usually invent his plots. On the contrary, weaving your narrative from strands of already familiar storylines was considered not just normal but desirable.

Bede, Life and Miracles of St. Cuthbert, in a volume entitled Ecclesiastical History of the English Nation,. trans. J.A.  Giles, Everyman’s Library 479,(London: J.M. Dent; New York: E.P.  Dutton, 1910), 286-349; all quotations in this post are taken from the online version found here. All illustrations taken from the digital collection at the British Library, from BL Yates Thompson 26.