The Subject of a Portrait: a Novel by John Harvey. Polar Books, Cheltenham: 2014. 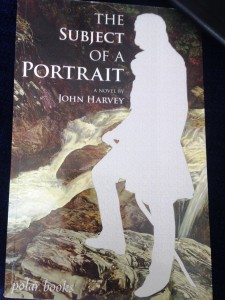 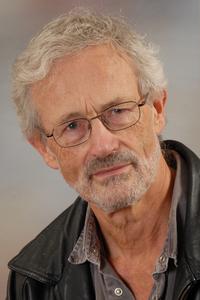 Apart from being the author of three previous novels, John Harvey (not the homonymous author of the Charlie Resnick crime novels) is a distinguished academic: he’s University Reader in Literature and Visual Culture at Cambridge, and a Life Fellow at my old college, Emmanuel. This interest in the ways in which visual art and fiction intertwine is reflected in this novel, and in his two books on the socio-cultural and literary significance of the colour black.  Men In Black (1995) explores the meaning of clothing and colour, and in particular the way that Victorian men’s clothing went dark, reflecting the constraint and self-abnegation of that period. He explores how Dickens and Ruskin (subject of the novel under discussion here) assessed its ‘paradoxical aspects of repression and self-assertion’. The Story of Black (2013) develops this theme in broader symbolic terms, including aesthetically and sexually. 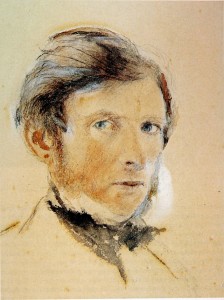 I mention this background because The Subject of a Portrait is deeply concerned with the repressed and conflicted consciousness of the eminent Victorian critic, John Ruskin (1819-1900), the eponymous Subject of the Portrait by the Pre-Raphaelite artist John Everett Millais (1829-96). The novel is about the famous love triangle involving Ruskin, his younger wife Effie (1828-97), and Millais.

Effie Gray had been born in the Scottish house where Ruskin’s grandfather had committed suicide – an event that is portrayed in the novel as a dark foreshadowing of the catastrophe of her marriage to Ruskin, which took place in 1848 – the same year that Millais founded the Pre-Raphaelite Brotherhood with his friends Holman Hunt and Dante Gabriel Rossetti. Millais met her in 1852, when she posed for the figure of the doughty Scots wife in his painting ‘The Order of Release’. 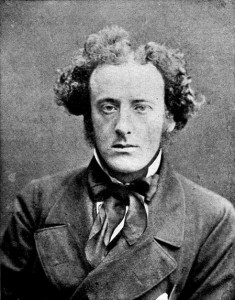 The story is well known and frequently filmed, dramatised on stage and on radio, as well as forming the basis of a number of previous works of fiction by, among others, Emma Donoghue (the story ‘Come, Gentle Night’, in The Woman Who Gave Birth to Rabbits, 2002, recounts the disastrous wedding night, when Ruskin was apparently repelled by Effie’s physical form, which differed from that of the classical statues which represented his ideal of female beauty). The marriage was annulled in 1854 on the grounds of non-consummation and Ruskin’s ‘incurable impotency’.

Events came to a head when the three, accompanied initially by Millais’ brother William, undertook a trip to the Trossachs (around 1853) where Millais had been commissioned by his patron Ruskin to paint his portrait. As Millais notices the strains in the Ruskins’ marriage and the husband’s high-handed treatment of his young wife, he falls in love with her, and she responds to his growing ardour. As noted just now, she tried to seduce John into a full sexual relationship (‘Make me your wife’, she urges him), but he is repelled by her advances and nakedness. His rejection is portrayed with chilling fervour by Harvey: ‘He drew back, as though a serpent crouched there’. When she asked him what was wrong with her, ‘He said in an odd, soft, mealy voice, “It is how you are made”’. When she shows herself hurt and confused, he describes her as his ‘curse’, she is ‘mis-formed, and mad’. When he confesses to a mysterious ‘vice’ of his own, it is her turn to feel a ‘spasm of revulsion’, and she spurns him, dispatching him from her room. He flings a last venomous insult at her: ‘scorpion’. When he has gone she realises he is dead to her as a husband, and she belongs to Everett. 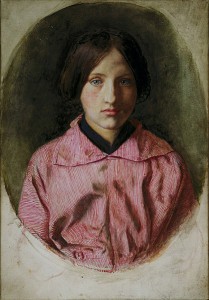 Millais, The Highland Lassie, c.1854, Delaware Art Museum, seems to be a portrait of Effie

Earlier she had admitted to Everett that she was still a virgin after five years of marriage: ‘”John does not like children. He calls them bits of putty. He says their eyes are like rat’s hair…We live like angels…It is John’s wish. He wants my figure not to spoil…”’ John’s confused sexuality is thus revealed as the novel progresses: his preference is for pre-pubescent girls, although there are glimpses of a homoerotic feeling towards Everett which he disguises as another ‘angelic’ ardour.

The second part of the novel deals with the aftermath of the Scottish trip, when the Ruskins returned to their Herne Hill marital home in London, and their marriage collapsed. Effie is aided by her friend Lady Eastlake to gain the legal annulment that freed her to marry Millais a year later, in 1855.

The story is summed up in the striking cover image, of Millais’ unfinished portrait of Ruskin (shown in my picture at the start of this piece). As the narrative shows, his method was to paint in the background of portraits in photographic detail, leaving the outline of the figure blank, a ‘white silhouette’ to be filled in later, in this case in London, as the novel shows. The scenes in Millais’ studio where Ruskin visits him to pose are painfully realised. Ruskin adopts a range of humiliating tactics, acting as the outraged innocent husband, betrayed by his protégé (even though Millais swears that although his love for Effie is reciprocated, they did not have sex during the Highland trip), and then suggesting the three of them enter into a triadic relationship. Millais becomes increasingly angry and frustrated with his patron’s bizarre, mercurial behaviour, and angrily rebuts this offer. Harvey astutely refrains from judging Ruskin, and by showing his occasional self-disgust and shame reveals him as a fallible human, rather than a monstrous stereotype of Victorian perversion. When he faces crises in his marriage or dealings with Millais Ruskin slips revealingly into mincing baby-talk and infantile behaviour. 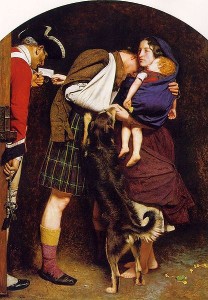 Millais, The Order of Release, 1853; Effie Gray posed for the figure of the Highland wife, saving her rebel husband from the British

The novel is written in a style that verges on pastiche of the high Victorian prose style, but which, like Hilary Mantel’s Cromwell novels, includes touches of modernity that remind us that it’s a modern sensibility behind the prose, as I hope the extracts I have quoted so far indicate. (There are occasional lapses into modern idiom, as when Everett’s brother asks him about his marriage plans with Effie: ‘”Next summer, right?”’ But perhaps this was an 1850s  usage after all? Maybe a specialist in Victorian linguistic style could clarify.) Presumably Harvey has used the letters and other documents available, such as the book by Millais’s grandson William Milbourne James, The Order of Release: The story of John Ruskin, Effie Gray and John Everett Millais (1943), based on the letters of the three characters. The dialogue in particular has the ring of authenticity in its register and idiom. 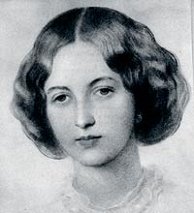 As I read it first time, I was surprised by the plot’s romanticism: the yearning, passionate love that grows furtively then increasingly openly between Effie and Everett is represented in touching detail. What prevents the novel from straying too far into sentimentality is the sobering, baleful presence of the repressed, tormented figure of Ruskin. He is portrayed as sexually a complete mess. He’s tormented by phallic nightmares of snakes. In Scotland Effie is perturbed by his liaisons with a dodgy figure who turns out to be a supplier of the pornographic images of ‘maids’, like the nine-year-old hotel maid whom Ruskin admits he is ‘half in love with’. Effie recalls that she was only twelve herself when she first met him, and he idolises her little sister Sophie. His response reveals his nature: ‘”I’m so old I can’t tell these things. But that is the age where beauty dwells, we spoil as we grow big.”’

Later, in a passage of interior monologue from Ruskin’s viewpoint, he reflects how even Millais has lost his allure, now that he had passed the age of being ‘maiden-fair’; he now ‘had the un-sweet voice of a man.’

Soon he would be – the male beast. Oh, animality – the pink stick of a dog in the street, two flies on a pane, the stallion rammed into the dripping mare. But away with brutishness. The perfect beloved must be young and new, delicate-fresh from the Maker’s hand. The tiny body not yet awake, perfect in shape – a fine gold down just appears on her lip. Lower, there is Heaven’s gate: he must never approach it.

Ruskin, in this portrayal by Harvey, emerges as asexual rather than nympholeptic, homosexual or a paedophile; his parents seem (as Larkin would agree) to be partly responsible for arresting his sexual development at a pre-pubescent stage of his own: he is not so much sexually attracted to little girls, as sexually repelled by adults. 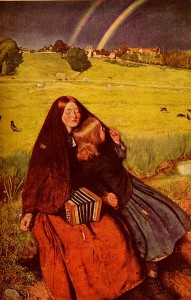 Millais’s lush style is apparent in ‘The Blind Girl’, 1856; Harvey’s novel relates the scene in which Millais sees this girl, who has a profound impact on him

The Subject of a Portrait is a subtle, engaging and intelligent exploration of some of the iconic figures of the Victorian literary and artistic period. We are familiar with the notion that the Victorians were a strange mixture of sexual repression and prurience; this novel brings to life these contradictions with style and great narrative skill. The characters of Millais and Effie are far from romantic stereotypes; their passion is depicted as convincingly as Heathcliff and Cathy’s. But it’s the strangely sympathetic portrayal of the monstrous innocent Ruskin, with his angels and demons in constant conflict, that dominates the narrative and lingers in the memory.

As I reach the end of this piece it occurs to me that this novel has much in common thematically with the Henry James’s story that I wrote about here recently; both ‘The Author of Beltraffio’ and this finely tuned novel by Harvey deal with the curious Victorian blurring of sexuality, repression and aestheticism.

(All illustrations are in the public domain; cover photo my own) 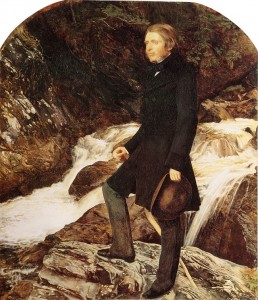 The finished portrait of Ruskin by Millais

5 thoughts on “Sexuality, repression and aestheticism: John Harvey’s ‘The Subject of a Portrait’”