After posting yesterday about John Cheever’s story ‘The Summer Farmer’, I thought I’d post briefly today about the first of Michael Pucci’s choices in his series of reviews at The Mookse and the Gripes site: ‘The Enormous Radio’. I’d also recommend this beautifully written review from New Republic in 1991 by John Updike of the then recently-published edited Journals of Cheever; he found their ’emotional nakedness’ disconcerting and painful to read.

First published in the May 17, 1947 issue of The New Yorker, this story is one of 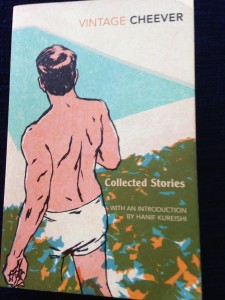 Cheever’s earliest in the Collected Stories (I’m using the Vintage paperback edition published in the UK in 2010).

Pucci quotes the opening sentences as indicative of Cheever’s deceptively deadpan style and detached point of view, and of his astonishing ability to capture and summarise character concisely. The plot is one of his most ‘fantastical’, but is narrated in a surreally unfantastical way: Jim and Irene Westcott live in a city apartment on the twelfth floor. It’s near ‘Sutton Place’, where other Cheever stories are located. They are ordinary, even humdrum people with very little money (though they can afford a maid). When their radio breaks Jim splashes out on a big new one, even though they can’t really afford it. So far this is very O. Henry.

Then it starts to get strange: they listen to music stations, but also begin to pick up conversations conducted by their apartment block neighbours. At first these are routine domestic exchanges, but gradually Irene becomes addicted to the increasingly intimate, often sordid talk emanating from the radio, and invades the privacy of the other tenants on ‘carnal love, abysmal vanity, faith, and despair’ – language typical of Cheever: large abstract nouns, as we saw in my previous post. This radio clearly has a ‘sensitivity to discord’, and Irene loves eavesdropping on the increasingly disquieting revelations it broadcasts, such as a cocktail party that ‘had overshot its mark’ – alcohol features prominently in Cheever’s stories as it did, ruinously, in his life (Irene has two Martinis at lunch, but leaves childcare and domestic chores to the maid).

‘Isn’t this too divine?’ she coos, in her faux ‘classy’ idiom.

As in the marriage of the Hollises in ‘The Summer Farmer’, all is not well in this relationship. Soon Jim explodes at his prurient wife’s hypocrisy, hurling at her all the peccadilloes of which she has been guilty, but about which they have never previously spoken. The list of sins escalates in seriousness, and ends with a shocking revelation that leaves Irene feeling ‘disgraced and sickened.’

Although it’s an early, rather formulaic example of Cheever’s stories, it shows many of the signs that he will fine-tune in later work: a dysfunctional couple in the ‘bitter mystery’ of their marriage in all its ‘carnal anarchy’ (Kureishi’s Introduction). As in the Hollis marriage the couple fail to express their true feelings, or to communicate. When Jim’s patience finally expires his outburst is savage in its ferocity, whereas the Hollises, one feels, will meander on through their arid lives, avoiding confronting unpleasant truths.

They are even more obsessed with status and appearances than the Hollises (who vacationed in their ‘summer farm’): Irene listens to classical music, and conceals the ugly radio cabinet behind a sofa. She goes out on ‘luncheon’ dates and wears a hat and ‘furs’. They aspire to live in Westchester.

Some of the overheard discourse is beautifully rendered: banal , fragmentary but indicating the same fault-lines in the tenants’ lives that are eventually revealed in the Westcotts’:

This is brilliant ventriloquism: the fractured delivery, repetitions of clichés and evasions, inability of the woman to express herself in a meaningfully accurate or coherent way, and lack of connection between the two– it reminds me of passages of bleak lower-class life in T.S. Eliot’s early poetry. It’s in these fragments of domestic tragedy and their concise revelations of despair and disconnectedness that the full power of the story resides, rather than in the unlikely plot device of the eavesdropping radio.