Geoff Dyer’s Out of Sheer Rage starts like this:

Looking back it seems, on the one hand, hard to believe that I could have wanted so much time, could have exhausted myself so utterly, wondering when I was going to begin my study of D.H. Lawrence; on the other, it seems equally hard to believe that I ever started it, for the prospect of embarking on this study of Lawrence accelerated and intensified the psychological disarray it was meant to delay and alleviate. Conceived as a distraction, it immediately took on the distracted character of that from which it was intended to be a distraction, namely myself.

The grammar is convoluted – he starts with a retrospective statement then a ‘one hand’/’other hand’-‘hard to believe’/’equally hard to believe’ oppositional/parallel pair of structures, each section of which has balanced, complex multiple clauses. This signals what’s to come: it’s a ruminative, fastidiously self-investigative tone, self-deprecating and witty, meticulously and skilfully controlled. The genre, it seems, is going to be autobiography.

But as we read on we find it’s a genre-defying book. It might be a novel about a writer’s inexhaustible capacity to procrastinate; that writer is called ‘Geoff Dyer’, but he may be a fictional construct. He’s endlessly irascible about the world around him, but also about himself and his clinically delineated defects; he’s mercilessly self-accusatory (look at that wonderfully modulated phrase ‘psychological disarray’, to describe what he clearly suggests is his default mental state). When he reveals that it’s Lawrence’s ‘irritability’ that he finds most endearing about the man, it’s obvious why: they are kindred spirits.

The epigraphs at the start are illuminating:

Out of sheer rage I’ve begun my book on Thomas Hardy. It will be about anything but Thomas Hardy I am afraid – queer stuff – but not bad.

That serves as a perfect summary of Dyer’s book: it’s not about ‘anything but’ Lawrence; it’s mostly about other things – as the second epigraph suggests:

Endless explanations of irrelevancies, and none whatever of things indispensable to the subject.

This is Gustave Flaubert on Victor Hugo’s Les Misérables. So we see Dyer fulminating against seafood and its resistance to being eaten and its disgusting taste when finally ingested; the awfulness of films in Italy dubbed badly into Italian; children and people who breed them; people obsessed with telephones…it’s a catalogue of grumpiness.

It must all be considered as though spoken by a character in a novel.

This is Roland Barthes, that trickster-savant murderer of the author. At one point Dyer writes:

Perhaps it is best to avoid the novel as a medium of expression. 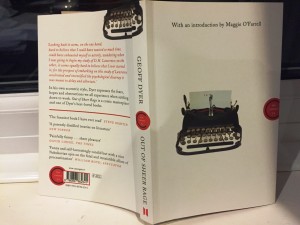 Dyer has signalled his intentions clearly from the outset then. What’s not clear from all this, though, is it’s often very funny. Not ‘the funniest book I have ever read’, as Steve Martin is quoted as saying on the jacket blurb – it didn’t make me laugh; but I did smile ruefully.

I found the stream of bile and the looping, self-cancelling vacillations (should he take this particular volume of Lawrence’s poems to Greece or not? Right, decided; no, changed his mind. Regrets it…) just a little too relentless.

It’s a travelogue of sorts, too, as Dyer and his long-suffering (and incredibly patient) girlfriend go on a savage pilgrimage of their own in search of the places Lawrence lived, replicating the miner’s son’s endless, doomed quest for a safe, healthy haven (his life was a ‘long convalescence’, said Huxley – a state Dyer characteristically claims for himself after a reckless crash on a moped), from his birthplace in grim Eastwood – become a sort of tacky literary theme park – to Sicily, Italy and New Mexico. There are other, non-Lawrentian pilgrimages mentioned in passing, like Dyer’s trip to Algeria in the steps of Camus.

There are erudite tones, too:  frequent allusions to Rilke, Nietzsche, Barthes and so on. These tend to be counterpointed jovially with earthy, scatological or sexually explicit scenes.

Occasionally among all this knockabout stuff Dyer inserts an aphorism that’s gemlike in its perfection, like this rueful reflection on a statement by Camus about accepting stoically what he is powerless to change:

Not like me. I can’t accept anything, especially things I am powerless to change. The only things I can accept are those that I do have the power to change. This, I suppose, is the opposite of wisdom.

Dyer loves these riffs in which key words are repeated, recycled, savoured in new contexts, positioned next to new verbal partners to see what ensues. The longueurs of this book are worth enduring for moments of brilliance like this.

The edition I used is the handsome paperback in the illustration above – strangely there’s no title or author name on the front cover: they’re on the spine. This is in the excellent ‘The Canons’ series by Canongate, published in Edinburgh 2012; first published in 1997.

3 thoughts on “Geoff Dyer, ‘Out of Sheer Rage’”