The Persian Wedding (Polar Books, Cheltenham: 2015) is a timely, angry novel. I’m writing this on the day after the attack on the Charlie Hebdo offices in Paris, apparently by Islamic extremists. Over the past couple of weeks lurid stories have been published in the media alleging sexual malfeasance by a prominent English prince, famed for his involvement in aiding British trade abroad – especially the arms trade with dubious militaristic regimes.

Author of The Lord, The Watchers and a volume of short stories, Michael Flay here turns his attention to the troubled cross-cultural relationship between two young lovers, in a setting in which terrorist attacks appear to be instigated by the Western political/security forces who ostensibly protect its people. Instead they ‘keep things insecure, then you impose the order that suits you.’ Sinister trains and ships transport deadly cargos of nuclear materials and goodness knows what else. British-made tanks patrol the repressed streets of the Shah’s Persia. British ‘advisers’ train torturers, their leaders gloating and gorging themselves in scenes of sickening illicit sex and violence. All power corrupts. 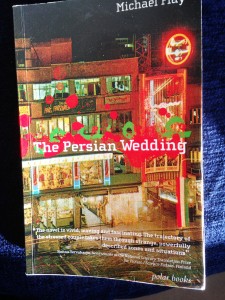 An unnamed English man meets a Persian girl at a language school in England at a time that seems to be around 1976. He’s the English teacher, she (her name is Zohre, which means ‘Venus’ in old Persian) the child of a privileged middle-class Persian family, sent to Europe to polish her education and no doubt make her a more suitable match for a wealthy Persian husband.

He follows her to her home country, still ruled by the autocratic Shah, propped up by UK and US interests (it was they who’d instigated the coup d’état which installed his family in 1953). We see the young man’s struggles to adapt to the passive, powerless position of a suitor for a woman who lives in a fiercely partriarchal world. He meets her young, westernised friends, who sympathise with the lovers’ plight and do all they can to help, but ultimately he fails to change the intransigent attitude of the Persian father.

Later things change for the better for the lovers, but this is set against a chilling account of the West’s cynical exploitation of a lucrative market for its weapons and personnel who specialise in intimidation, sedition and control.

The narrative style is pared down and restrained, in keeping with the sober subject matter. There are descriptions of the bucolic English setting at the start, which ironically contrast with the stark scenes in urban Tehran which fill the bulk of the rest of the novel.

Michael Flay habitually deploys a paratactic style, piling on adjectives and noun phrases to the main clauses, to demonstrate, for example, the random fortuitousness of events happening beyond the protagonist’s control; here’s an early description of Tehran soon after the man arrives there:

Air hung heavy with exhaust fumes, coloured blue grey. Unfinished blocks of apartments lined the road in disorder. Buildings were put up, incomplete, non embedded on scrap land…There were several limousines, chauffeur driven, running  silently, these were common like broken off parts of a US president’s cavalcade, dispersed. Everywhere space was taken up, cars, buildings, as if dumped down at random, unembedded and laid on.

This technique also adds cumulative detail to the disconcerting  narrative: there’s a dreamlike quality to the prose, which foregrounds the disturbing incongruities in the story. Tehran under the Shah is a city of a westernised, power elite, deeply corrupt and cynical; England is little better. And after the 1979 revolution and the return of Khomeini, nothing changes. Everywhere is the same. Women are used as sex objects but otherwise kept in subjection. Fathers and men are all-powerful, demanding total obedience of their daughters. Yet they commit despicable sex crimes themselves. Hypocrisy is rife.

The protagonist’s attitude throughout seems to me rather naive: he would go to Iran, he thought, at the start of the novel, ‘confident’ and optimistic that he could convince the family that he was a suitable match for this pampered but closeted daughter in a stereotypically protected environment, and spirit her away from potentially more suitable matches (as the father would see them). He was educated, decent – what could possibly go wrong?

But of course that’s what happens in life. We all believe the person we love and who loves us is all that’s needed to convince everyone that the match is right. To hell with convention, social pressures and the desire to conform to bourgeois morality (which usually involves perpetuating the system of self-aggrandisement financially); love conquers all.

This is a novel with some flaws in the style, perhaps – all those loose-limbed sentences with their odd syntax and accretions. But it’s also a searing indictment of repressive regimes everywhere, not just in Iran, and of the swaggering toxicity of power elites, and their inbuilt conviction that they have the right to do whatever they like in a world tailor-made for their own gratification.

Perversity takes many forms, and this novel powerfully melds the political with the personal: sexual depravity as an outward and visible form of inward corruption – in short, of the evil of our decadent western world. Yes, the Iranian society depicted here was corrupt, misogynistic and depraved, but ours has pretensions of superiority; it is no less depraved, flawed or corrupt. Worse, really, for we see ourselves as beacons of fairness and upright moral probity.

Yesterday in Paris fundamentalists murdered writers and artists for propagating satiric views. Novels like this play an important role in holding up a mirror to our complacent society; as was memorably said by Swift in the preface to The Battle of the Books (1704):

Satire is a sort of glass, wherein beholders do generally discover everybody’s face but their own.