‘The Pension Beaurepas’ was first published in The Atlantic Monthly in 1879. In this story, James satirises two types of American abroad in the guise of two families staying at the Geneva pension run by the redoubtable Mme Beaurepas: the Ruck family from New York City, who represent the rich, uncultivated ‘new money’ families like Daisy Miller’s (Trevor Berrett wrote about her story at the Mookse and Gripes website here) – who show little enthusiasm for the history, culture or scenery of Europe, while demonstrating the principles of liberty, innocence and democracy. The other family are polar opposites to the Rucks: the Europeanised American Mrs Church and her daughter Aurora (and, incidentally, our narrator). Mrs Church had brought Aurora to Europe from their American home sixteen years earlier when the girl was only five.

The young, unnamed American narrator of the story explains at the start why he has come to stay at this pension:

I was not rich – on the contrary; and I had been told the Pension Beaurepas was cheap. I had, moreover, been told that a boarding-house is a capital place for the study of human nature. I had a fancy for a literary career.

Already we can see the subtle presentation of the familiarly ambiguous James narrator: an ingenuous, studious, slightly pompous young man very like himself, with his own literary-cultural hypersensitivity, and a propensity for close observation of his fellows, while at the same time demonstrating a reluctance to engage fully in the life he so attentively observes – a timidity seen in Winterbourne, the disengaged narrator of ‘Daisy Miller’ — and which culminates in a singularly unflattering (to him) episode at the end of this story to which I’ll return shortly.

The first strand in the plot reworks the King Lear theme in Balzac’s Le Père Goriot: Sophy and Mrs Ruck relentlessly spend Mr Ruck’s money, unaware that he has become bankrupt. In ‘An International Episode’, about which I wrote in the Mookse and Gripes last time here, also posted on this blog here Kitty Westgate, whose husband (a work-obsessed counterpart to “tragic” Mr Ruck) hardly appears in the narrative, so busy is he in his lucrative law business, says this:

An American woman who respects herself must buy something every day of her life. If she cannot do it herself, she must send out some member of her family for the purpose.

The narrator says of Mrs Ruck and Sophy, near the story’s end:

“Between them they are bleeding him to death.”

I shall focus here though on the second theme in the story: that of the American Girl. In ‘Daisy Miller’ she’s portrayed, through Daisy, as a charming mix of frankness and spontaneity,  brashness and vulgarity, but essentially, like all American girls, according to Winterbourne, “exceedingly innocent”, even when at her most coquettish and immodest.

Sophy is representative of the Daisy Miller type of feisty American girl. She is “a lively brunette” is the narrator’s initial impression, and “very pretty”, “decisive” and opinionated (like Daisy). When she learns that Aurora is “dying to go to America” but “her mother won’t let her”, she says indignantly:

“If I were you my mother would have to take me.”

The narrator is clearly more attracted to Aurora, who is a less dauntingly assertive, more retiring version of the American girl. She and her mother are described by a fellow guest as having “a tournure de princesse”, and it is as a kind of democratic princess that James usually portrays young American women.

Aurora has never been out of the house alone, and sadly describes herself as having been in Europe, with its social constraints for young women, “always”. She is desperately homesick and frustrated by her imperious mother’s control:

“American girls are so wonderfully frank. I can’t be frank, like that. I am always afraid.”

Our narrator perceives, as Sophy does, however, that her native spirit hasn’t been entirely quashed. She tells him, for example, with ingenuous “coquetry”, that her “figure was admired” in France –

But I was an innocent youth, and I only looked back at her, wondering. She was a great deal nicer than Miss Ruck, and yet Miss Ruck would not have said that.

The perceptive Mme Beaurepas tells the narrator that Mrs Church’s restless migration across Europe via its cheap boarding houses is because “She is trying to marry her daughter.” Whereas Daisy Miller and her family lacked the “culture” to catch an aristocratic and wealthy European husband and were “intellectually incapable of that conception”, Aurora simply lacks a “dot”, as she calls her dowry. What adds poignancy to Aurora’s position is that all she really longs for is the freedom she believes her compatriots enjoy. As the narrator says to her mother:

“…in America young girls have an easier lot. They have much more liberty.”

Mrs Church is not convinced that this is a desirable condition:

“We are very crude,” she softly observed…”There are two classes of minds, you know—those that hold back, and those that push forward. My daughter and I are not pushers, we move with little steps. We like the old, trodden paths; we like the old, old world…we like Europe, we prefer it.”

She calls upon Aurora to endorse her “point of view” – a phrase which was to become a key concept in James’s fiction, as we shall see – and the girl dutifully does so —

with a sort of inscrutable submissiveness. I wondered at it; it offered so strange a contrast to the mocking freedom of her tone the night before… 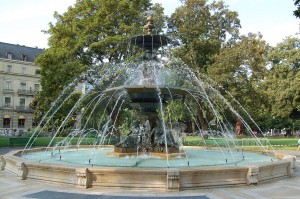 This conflict of views comes to a crisis when Aurora and Sophy walk alone in the English Garden in Geneva. The narrator and a fellow boarder encounter them there, and are shocked to see them so “insufficiently chaperoned”.  Aurora’s rebellious spirit flashes out, in a speech very like Daisy’s when found in a similarly compromising situation with her Italian admirer:

She explains that she is in a “false position”, and here is where she becomes less ingenuous than Daisy:

“You are not an American girl,” I ventured to observe…

“There’s my false position. I want to be an American girl, and I’m not.”

“Do you want me to tell you?” I went on. “An American girl wouldn’t talk as you are talking now…She wouldn’t reason out her conduct…”

“I see. She would be simpler. To do very simple things that are not at all simple – that is the American girl!”

She tells the young man she anticipates having “the most lovely time” in New York if the Rucks invite her there – because there at last she would have “absolute liberty”. Her mother adores “European society”, and Aurora knows she’ll be punished for the liberties she is taking at that moment with him – and her mother duly arrives and whisks her away in a closed cab.

Later Mrs Church tells the narrator that she disapproves of the Rucks and their uncultivated vulgarity. She intends to remove Aurora from the “pernicious influence” of “this deplorable family”.

The story ends with her doing just that. Before she fulfils her promise, however, Aurora has one final, revealing conversation with the narrator, to tell him that she and her mother leave for Dresden the next day. He suspects she has sought him out in the pension’s garden that evening to break this news, and he feels very sorry for her, and finds her “interesting” and “charming”. He realises this “insidiously mutinous, young creature was looking for a preserver.” For a moment this is a heroic role he finds tempting to play; he tells her he knows she desires the “liberty” taken for granted by other American girls. Her mother, she replies

“…has so perverted my mind that when I try to be natural I am necessarily immodest.”

She has said her piece, and now waits to see what he will do. As she turns to leave he has a momentary impulse to leave with “this yearning, straining young creature” and pass into “mysterious felicity”. But it doesn’t happen:

If I were only a hero of romance, I would offer, myself, to take her to America.

Like Winterbourne, however, he is unwilling to act decisively when faced with the prospect of a romantic relationship.

The story is, then, more of an example of what James later called “portraiture” – a sketch rather than a developed, textured story. But it is an interesting example of his developing portrayal of the consequences of the innocence of the American girl coming into contact with the decadence and hierarchical social rigidities and atrophied morality and customs of the Old World. He shows how both worlds have their attractions and charms, but both are flawed in their own ways.

We meet Aurora again in a story published soon after this one. Its title is the term employed crucially by Mrs Church in ‘The Pension Beaurepas’, as noted earlier: it’s called ‘The Point of View’.