Over the last few weeks, among my posts about Julia Harvey’s two novels about the family drama set in the Greek diaspora community of Smyrna and then Thessaloniki, I’ve been recommending some of my favourite book podcasts. Today I’d like to round this sequence off with a brief summary of a final few.

I’ve already mentioned some BBC Radio 4 programmes with podcast versions available free online; here I’d like to add the Radio 4 Bookclub. It’s hosted engagingly by the astute James Naughtie (about to leave the prestigious Radio 4 morning news programme Today after some twenty years to take up the post of books editor, among other things, with the BBC). It’s very like book clubs in the real world, except that here the author of a book is invited to the studio to be interviewed by Naughtie, then the audience is free to pose questions of their own. It’s more than an opportunity to market a new book: often the work chosen was published some time ago, so there’s genuine reader engagement with a rare opportunity to hear what the author was striving to achieve. Recent guests include Jon McGregor, Lorrie Moore, Donna Tartt and Hilary Mantel. Although the names tend to come from the more popular end of the literary spectrum, there’s usually plenty of interest.

Also broadcast by the BBC, the World Service this time, is the general arts programme Strand. Although no longer on air – it finished in 2013 – its archive is still freely available online, and has many features of merit in it. For example there’s an obituary/tribute to Chinua Achebe, and an interview with Javier Marías on his novel The Infatuations (which I reviewed here). Being a World Service production, though, Strand has a far wider remit; other pieces include profiles of Romanian cinema, Lebanese trumpeter Ibrahim Maalouf, the Indian film director Anurag Kashyap, and Michael Haneke’s production of Cosí fan Tutte in Madrid. Pretty eclectic, then.

I have to declare an interest about this next choice of general literary website, but with a cool podcast attached: The Mookse and the Gripes — I’m an occasional contributor, with pieces on Joyce’s Dubliners and an ongoing series on the stories of Henry James. But this is one of the best podcasts out there for its mix of conversations (mainly) about NYRB Classics titles, and in particular of literature in translation. Apart from well-known names that the irrepressible Trevor Berrett and his brother consider, such as Kingsley Amis, Theodor Fontane and John Williams, there are (to me) less prominent figures like Lydia Millet and the Russian writer of short stories Sigizmund Krzhizhanovsky (b. Kiev 1887).

Another site that specialises in critical discussions on modern world literature is Three Per Cent, produced by the University of Rochester. It takes its title from the sad fact that only that percentage of books published in the USA are works of  literature in translation. All kinds of new names have been brought to my attention here (and on the related website). 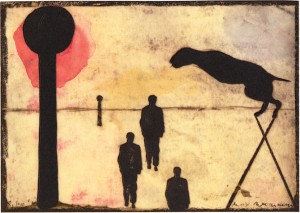 Drawing by Max Neumann from Animalinside, his 2010 collaboration with Krasznahorkai.Image from the Sylph Editions website

Next choice for world literature in translation (description taken from its website): ‘That Other Word is a collaborative podcast between the Center for Writers and Translators at The American University of Paris [which also publishes the ‘Cahiers Series’ of texts in association with Sylph Editions – this illustration is taken from one I bought and enjoyed] and the Center for the Art of Translation in San Francisco. The podcast offers discussions on classic and contemporary literature in translation, along with engaging interviews with writers, translators, and publishers. Hosts: Daniel Medin and Scott Esposito.’ Although this podcast also has in-depth discussions on writers from across the world, there’s also professional consideration of the translator’s role and art.

Finally, to turn attention to podcasts which feature readings of fiction, I’d recommend the New Yorker‘s offering. The format is intriguing: a prominent contemporary writer chooses a favourite story published in the New Yorker magazine, reads it and then discusses it with the fiction editor, Deborah Treisman. A random selection of some recent gems includes Joshua Ferris reading Robert Coover’s ‘Going for a Beer’, Etgar Keret – Donald Barthelme’s ‘Chablis’, and Joseph O’Neill – Muriel Spark’s ‘The Ormolu Clock’.

Most of these podcasts last between 30 and 45 minutes — ideal listening when walking (or in my case, cycling) to work or driving down Desolation Row.

I’d love to hear what book podcasts you’d recommend – and maybe where and how you listen to them.