Excellent Women was Barbara Pym’s second novel, published in 1952, but set, as a note on the MS indicates, in the year immediately after the end of WWII: London is a city still gripped by economic austerity, rationing is still in force, meat and other commodities are in short supply, there are still bomb-ruined churches (though the services still go on), and the men are still coming home from military service to find their homes much changed. The women they left behind have learned to become more independent, and unsure whether they want to return to the old, pre-war culture of subservience to the men. 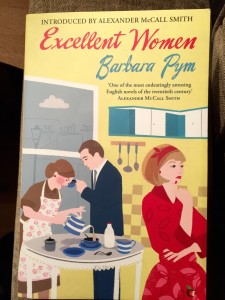 The novel has been much written about by other bloggers (links at end), who all give admirable summaries of plot and themes, so as with some of my recent posts I’ll give just a sketchy outline of plot here, then focus on those aspects of the novel that I found most interesting.

The protagonist is a 31-year-old spinster, Mildred Lathbury (a dowdy name, resonant perhaps of ‘mildewed’ or ‘mouldered’? buried?), who lives alone in a flat in an unfashionable part of London, on ‘the “wrong” side of Victoria station’. She’s a pillar of the local Anglo-Catholic church, and much of her life is devoted to its fund-raising and parochial matters. She’s a close friend of its priest, Julian Malory (he’s ‘about 40’), and his slightly older career-spinster sister, Winifred. The two women have vague notions that he and Mildred might one day marry; he insists he’ll remain celibate, until he meets his glamorous new lodger, Allegra (more on her shortly). Despite her relative youth, Mildred comes across as lonely, middle-aged and frustrated, for she is imaginative and spirited, not entirely convinced that she’s cut out for the life of submissive service to others – of taking on their ‘burden’ (a key word in the narrative) — that she’s assumed, and which others assume, is her lot.

Mildred’s life, and those of the Malorys, are changed irrevocably by the arrival of two sets of new neighbours. This plot device causes all three of them to reassess their relationships, their feelings and their destinies.

The central theme is the desirability of or necessity for a woman to marry. Is there a possibility of fulfilment in any other kind of relation in this world, as there is for men? Pym is too subtle an artist to give a clear answer; her delightful skill lies in her subtle and deceptively witty way of posing such questions.

As others have written so fully about all of this, I’ll simply look at a few passages and comment on what I enjoyed so much about this novel.

First, it isn’t as cosy or twee as it might seem on the surface. As with Jane Austen’s heroines and fictional worlds, with which Pym’s have often been compared, there is a steely, deeply serious quality beneath the humorous, parochial triviality of Mildred’s daily routine.

Another revealing literary parallel drawn explicitly in the narrative; Mildred says early on that she is not Jane Eyre,

Who must have given hope to so many plain women who tell their stories in the first person, nor have I ever thought of myself as being like her.

This merits close attention. There is no further explanation or justification of this remark, and one’s initial reaction is to think: Really? What makes you think that? Isn’t Mildred deceiving herself, or failing to face up to her own shortcomings and weaknesses? By the time I’d finished the novel, however, I revisited this statement, and have come to agree that indeed she isn’t a Jane Eyre. Charlotte Brontë’s heroine is always going to find her Byronic, broodingly handsome and wealthy hero, despite her self-deprecating, humble doubts that such is the fate for the likes of her.

Mildred, the novel shows, is far from certain that her ‘Mr Right’ exists in her circle of acquaintance; more important, she has serious doubts whether she wants or needs a man to complete her. Yes, she presents herself as ‘mousy and rather plain’, with the drab dress sense of a much older woman. But after meeting her glamorous new neighbour, Helena Napier, and the splendidly and deliciously inappropriately named Allegra, a predatory merry widow who turns the head of Julian when she ingratiates herself into his life as his lodger, Mildred smartens herself up and even buys some uncharacteristically sexy ‘Hawaiian Fire’ lipstick and swaps her usual dowdy brown skirts for a chic Dior-esque black dress. She is not prepared to become the kind of ‘excellent woman’ Jane Eyre was, and did not want to conform to that romantic formula – even though like Jane she craves love and companionship. In that sense this can be seen as a proto-feminist novel in its questioning of that kind of fairytale plot outcome.

How does Pym negotiate all this without descending into banality? Here’s a random passage I’d marked early in ch.1:

I don’t know whether spinsters are really more inquisitive than married women, though I believe they are thought to be because of the emptiness of their lives…

Her language here, as in the previous passage about Jane Eyre, is suggestively ambiguous. Mildred habitually expresses such bleak thoughts in an unassertive way, often as negatives (she is not Jane Eyre, she does not know about married women compared with her own spinster state), with frequent hedges – all that use of adverbial markers of doubt or uncertainty, like ‘really’, ‘rather plain’ and so on. And the more she protests her unworthiness with such unassuming, self-deprecating timidity, the less I believe her. This is the persona she has been ‘trained’ for – as she often suggests about her upbringing as a ‘clergyman’s daughter’. For although it’s her natural inclination to assume her role in life is to be a mouse, as it was Jane Eyre’s, like Jane she has suppressed fire in her. In that sense she IS Jane Eyre – but Jane’s Rochester is definitely not matched by Mildred’s handsome new neighbour Rocky Napier (the similarity of name is surely deliberate). 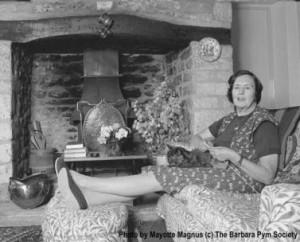 Mildred is sexually attracted to Rocky, with his ‘charming smile’, but realises he’s a shallow, philandering flirt. Part of her would love to throw herself at his feet – but this is not 1847, and Rocky isn’t going to be symbolically castrated, as Rochester is when he’s blinded in the fire at the end of Jane Eyre. On the contrary, Rocky never really looks at Mildred, preferring to gaze at his own reflection in her adoring eyes. And deep down she knows it.

Mildred had worked ‘in the Censorship’ during the war, and later at a ‘Learned Society’ of anthropologists – as Pym herself did. As a consequence she isn’t as unworldly or naïve as she chooses to suggest – though she certainly deceives those who know her into assuming that she is, and it’s easy for a modern reader to fall into the same misconception. Despite her frequent references then to her gradual drift into becoming ‘fussy and spinsterish if I wanted to’, ‘set in my ways’, ‘spinsterish and useless’, one of the shabby-genteel ‘impoverished gentlewomen’ whom she helps out in her voluntary work, the language clearly hints that she doesn’t ‘really’ want this fate:

I forebore to remark that women like me really expected very little – nothing, almost.

She says this to the other potential romantic partner in her life, the attractive but desiccated Everard Bone (Pym’s good on names). As ever the apparent nullity of her expectations is counterpointed by those qualifications: ‘really’ (yet again), ‘almost’. And of course, she ‘forebore to remark’ the words anyway. She might have thought them, but she sure as hell wasn’t going to say them to the pompous, treacherous Everard.

It’s this plucky refusal ultimately to accept the Trollopian fate that all around her – and those who shaped her – take for granted will be hers that makes Mildred such an engaging heroine, given her apparently self-effacing character. In another of her little remarks in which as usual she appears to present herself as nugatory, there’s the equally usual ambiguity; she’s being teased by Father Julian about her crush on the desirable sailor home from the war, Rocky; Mildred would never ‘do anything foolish’, says his sister Winifred, springing to her defence. Mildred reflects on this ‘a little sadly’ (note the usual hedge) as being ‘only too true’, but

…hoped I did not appear too much that kind of person to others. Virtue is an excellent thing and we should all strive after it, but it can sometimes be a little depressing.

Exactly. She may be a female Prufrock, but like Eliot’s wistfully cautious and obtuse ‘Fool’, who is ‘not Prince Hamlet nor was meant to be’, Mildred has heard the male equivalent of ‘mermaids singing’. And she’s less inclined than Prufrock to believe finally that they won’t sing to her – or that if they do, she’ll be taken in by their siren calls.

Most recent is the excellent post at Jacqui Wine’s Journal. Jacqui closes with links to several other bloggers’ reviews. I’d also recommend to anyone interested in further researching the work of this once neglected author’s work the site of the Barbara Pym Society, which has links to a huge range of web resources, including scholarly conference papers of that Society.