When I was studying Spanish at school back in the late 60s, my teacher, who then seemed to me an old man, but who was probably younger than I am now, used to beguile us all with his misty-eyed reminiscences of his youthful days in 30s Spain, which seemed to be spent bathing in icy mountain pools and eating delicious peasant food in country inns. Gamel Woolsey’s autobiographical account of her experiences of the outbreak of Civil War in Andalucía in 1936, and in particular the beginning of the attacks on Malaga, belongs to that same era, when the pastoral tranquillity of the country was shattered irrevocably. 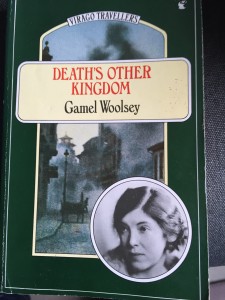 My copy is in the Virago Travellers series

Published in 1939, Death’s Other Kingdom is a lyrical and deeply personal record of her feelings and perceptions as the rugged but idyllic village life she shared in Churriana, just outside Malaga (now absorbed into its post-tourist-resort urban sprawl) with her husband, the Hispanist author Gerald Brenan, turned into a nightmare the morning she woke to the news of Malaga burning ‘under a pall of smoke’.

It was the most beautiful day of the summer…The sky at dawn was cloudless and the ‘pink band’ of the tropics, the band of rosy light which ascends the sky from the horizon at twilight, rose to the zenith and faded into the growing light. Then the sun rose suddenly with a leap into the air: the long hot southern day had begun.

It’s a world of placid serenity, when the Brenans did little more, in the summer heat, than ‘bask in the day like lizards, in the shade of the high white garden wall’ which surrounded their big old house with its walls ‘four feet thick’, and its huge garden, ‘gay with bright flowers, immaculate and cool in any weather.’

She describes the place with sensual, poetic fervor:

I always loved waking in Spain. The sun fell in stripes from the slatted shutters on the red and white diamonded tiles of the floor. Noises from the street below floated up; the pattering feet of the milk goats sounded like rain drops…

More sounds rise up: the ‘melancholy call’ of the fish sellers ‘their hampers full of fresh fish just coming up from the sea on their lean donkeys’ — Sardinas and boqueronis – ‘the food of the poor, the cheapest of fishes.’ Then come the cries of the vendors of ‘grapes fresh and plump’, tomatoes and ‘pimientos gordos’, ‘melons, lettuces and plums, squashes, peaches and pumpkins were passing, a perfect harvest festival going by on donkeys.’

This is the dominant tone of the book: Woolsey’s profound sympathy for village life and the desperately poor rural inhabitants of these remote mountain and coastal pueblos. There are affectionately vivid portraits throughout the book of the Brenans’ domestic staff: Enrique, ‘a gentle, charming young man’, their passionate gardener, and his mother María the ‘severe’ and crotchety but ‘devoted’ cook-housekeeper and her daughter, a ‘melancholy widow’ called Pilar, whose brief experience of romance is cruelly and violently ended, leaving her in sad solitude again.

For a village in Spain is a unity; its inhabitants are like members of a clan, they have a close and indissoluble bond. ‘My village’ is constantly in the mouth of a Spanish countryman. It is more than ‘my country’.

The villagers view with deep suspicion anyone from a different village, no matter how close; as for the nearby town of Malaga – it’s seen as the abode of evil people.

But when Malaga is set on fire and the air-raids begin, the peace is shattered. Lorries thunder by constantly:

The young men wave their pistols and throw up their clenched fists in a gesture of triumph.

All is confusion. The ‘Revolution from the Right’ is countered by a ‘Revolution of the Left’. Rumours fly rapidly. Everyone is fearful, most especially of ‘El Tercio’ – the seasoned Foreign Legion ‘worthy of Lucifer’, and its most feared contingent, the Moors, the expectation of whose arrival ‘ran like a cold wave of horror through the countryside’. Patrols enter the house and the countryside looking for enemies. Arrests and imprisonments are commonplace, and summary executions and brutal reprisals from both sides terrify the people. Former friends become mistrustful enemies. Irreparable fissions form in the village’s life. The Brenans are protected from the worst atrocities by their foreignness – Gerald flies a Union Jack over the house and this acts like a lucky charm. But many of their neighbours and friends are less fortunate.

There are vivid descriptions of their visits to Malaga to see for themselves the terrible destruction wrought by the newly erupted Civil War. There are rueful touches of humour: they meet an Englishman in Malaga who regales them with tales of the night the houses around him were torched:

But I suppose it seems worse for British subjects to lose their luggage than lesser races their lives.

Most of the narrative relates with grim impartiality the catastrophic impact of the war on the people. A kind of madness grips the civilians, who indulge their ‘uglier instincts’ and take malicious pleasure in spreading stories of atrocities. It’s the ‘pornography of violence’ as she memorably puts it. ‘Hate is the other side of fear’, she suggests, ‘and it was horrible to see and feel this hate-fear rising around us like a menacing sea.’ The people are gripped by the ‘suspicion and bitterness’ that ‘thrive on fear’; ‘the distrust of Spaniards for other Spaniards is bottomless’.

The strangest section of the book is devoted to the Brenans’ providing refuge in their house to the aristocratic family from whom they’d bought it. Well-known supporters of the Falangists, they were in mortal danger if they stayed on in their own estate near the airport, so they accept the offer of a hiding place for their entire family and retinue. It’s an extraordinarily dangerous gesture of generosity, and would have cost the Brenans their lives, foreigners or not, if their guests had been found by the vengeful workers who searched for them and any other Franco supporters. Our sympathies are hardly engaged when Don Carlos, the head of the family, dances with glee on the Brenans’ rooftop as he watches Malaga burn in a fascist air-raid.

Gamel Woolsey (1895-1968) was an interesting character. Born Elizabeth Gammell (her mother’s maiden name; she later shortened it to Gamel and dropped her first name) Woolsey to a wealthy South Carolina plantation owning family, she was brought up with a sense of morality and virtue that are so apparent in this memoir. Her aunt was the author of the Katy books, Susan Coolidge, whose real name was Sarah Chauncey Woolsey.

She had an affair with a member of the literary Powys family, Llewelyn, whom she followed  to England in 1929, settling in Dorset to be near him. There she met Brenan (1894-1987), and left for Spain with him where they settled as man and wife. He had been a member of the Bloomsbury group, and had been romantically involved with Dora Carrington; Gamel was pursued by the philosopher Bertrand Russell. Leftist in politics, Brenan had served as one of the youngest British officers in WWI. His terrible experiences there explain some of his responses to the brutal behaviour of some of their Spanish neighbours when the Civil War broke out, and his determination to help the oppressed, whatever their politics or religion.

In Spain they were visited by a stream of eminent artists, including Virginia Woolf, the Partridges (Frances wrote the Introduction to my Virago edition of DOK), Hemingway and V.S. Pritchett.

The book’s title is taken from T.S. Eliot’s Dante-influenced poem ‘The Hollow Men’ (1925):

Those who have crossed

With direct eyes, to death’s other kingdom

Remember us – if at all – not as lost

Violent souls, but only

As the hollow men

‘Death’s other kingdom’ is one of three of death’s kingdoms in the poem, and it relates to that heavenly zone entered by those who have left behind a state of spiritual nothingness (in hell or purgatory) and entered into an enlightened state of knowledge where they are capable of seeing the inner truth. The hollow men are those who fail to reach such heights. Eliot was one of Gamel’s favourite poets (she was primarily a poet herself, though she published very little verse or prose in her lifetime), and the line’s significance for her memoir is apt: it could signify the higher truth to which she felt those who experienced war should aspire, rather than the hypocrisy, lies and deception that so many around her (the hollow men) wallowed in when hostilities broke out, who lost sight of their morals and values.

6 thoughts on “‘The evil in the air was corrupting everybody’: Gamel Woolsey, ‘Death’s Other Kingdom’”