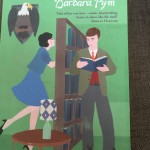 10 thoughts on “A quietly heroic woman: Barbara Pym, ‘No Fond Return of Love’”