I recently discovered the fascinating blog Clothes in Books by Moira: it does as the name suggests: explores the significance of clothes in works of fiction. As a consequence I’ve decided to postpone my intended review of Anne Enright’s excellent novel The Green Road (first published last year) until another time. Instead, hoping to whet your appetite for more, I’ll borrow her approach and look at one aspect of clothing in this family saga set in rural western Ireland, near the cliffs of Moher overlooking the Aran Islands. 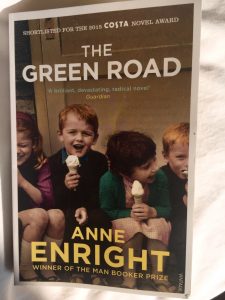 My Vintage paperback copy of ‘The Green Road’

The matriarch  of the Madigan family, Rosaleen, has four children; Dan, the oldest, states his intention in the opening chapter, to his mother’s horror, of giving up college in Galway after his first year and becoming a priest. He would finish his degree at the seminary, he says.

Apart from the challenge of reconciling his family to the news, there’s the ‘small matter’ of Dan’s girlfriend, who also has to be told. He takes his 12-year-old sister Hanna with him back to Galway and introduces her to the interesting Isabelle:

“Hello,” said the woman, holding out her hand, which was covered in a dark green leather glove. The woman looked very nice. The glove went up her wrist, with a line of covered buttons along the side.

The description is given from Hanna’s viewpoint, hence the childish tone. She’s smitten by what, to her, seems a glamorous chic look. Later we’re told she had ‘a clasp in her hair made of polished wood’, which again seems the epitome of good taste to Hanna. Shortly afterwards Hanna fantasises about her romantically:

Dan’s girlfriend was a tragedy waiting to happen. And yet, those green gloves spoke of a life that would be lovely. She would study in Paris. She would have three children, teach them beautiful Irish and perfect French. She would always mourn for Dan.

When she asks her name and Isabelle tells her Hanna thinks ‘Of course. She had a name that came out of a book.’ Hanna, who grows up to be an actress, sees (or thinks she does) an enviable drama in this beautiful young woman’s appearance and manner.

On her return home she describes Isabelle as ‘beautiful’.

The reader is probably intended to feel less overwhelmed; Isabelle is simply channeling the standard student bohemian look of the period: 1980. Naive country girl Hanna has never seen such urbanity and sophistication before.

Chapter 2 is devoted to the next stage of Dan’s life. It’s New York 1991, and he has not become a priest. Instead he’s part of the gay scene, breaking hearts with his dashing good looks and Irish brogue. Isabelle is there too, and she and Dan are engaged, but the narrative voice is that of an anonymous member of this gay community who views her with cryptic suspicion:

We met the brave little wife-to-be later…She was nice. Skinny, as they often are. Slightly maverick and intense and above all ethical. She had long hair, a lovely accent, and she was writing a book, of course…As beards went, she was a classic beard. A woman of rare quality– because it takes a quality woman to keep a guy like Dan straight.

Interesting that the childish ‘nice’ is used again, but here in a passage of much more perceptive maturity. And of course the narrator is predisposed to be critical, unimpressed, the very opposite response from Hanna’s. The LGBT period slang ‘beard’ is a largely derogatory term for the sham romantic partner used to camouflage a person’s sexual orientation, and its use is sardonic here, with the grudging but comically cynical and ambiguous admission at the end that she was  attractive enough to tempt Dan away from his true destiny.

Billy, who has fallen in love with Dan, meets her for the first time a few pages later, and this description, like Hanna’s, presents his impressions through free indirect style:

…the unreliable little ribcage, with a pair of those flat little triangular breasts like flesh origami: also lumpy bits from waist to hip where her underwear was a bit too pragmatic – she would look better without, he thought, though Isabelle was not the sort of girl who would ever go without. The most surprising thing about her were the shoes, which were black to match the rest of the outfit, but with fabulous, bloody red soles. She walked in them like a child playing dress-up.

This glorious sketch is typical of Enright’s brilliant mastery of the multi-vocal narrative mosaic she constructs. It’s camp and funny, with that bitchy detail about the underwear and how Billy interprets it, and his unstated but implicit criticism of her boho-beatnik-cool black outfit. The grudging admiration of those shoes (presumably Christian Louboutin, though my research shows he didn’t introduce this trademark look until the following year, 1992) is comically, brutally undermined by the final sentence. All of those adjectives are spot on: ‘unreliable’ (ribcage); ‘lumpy bits’, ‘a bit too pragmatic’ (underwear) – I love that – and the gushing ‘fabulous’ – then the crushing, infantilising demolition job. And it’s all to do with how Isabelle looks – here, and in Hanna’s breathless, adoring account. It conveys with ice-green hostility the jealousy Billy feels but doesn’t admit to.

I’m not as good at this analysis of clothing as Moira, but it’s fun to approach a work of fiction in this way. It drew my attention to some details that I’d half noticed on first reading, but which on closer scrutiny brought out what I hoped you’ve found an interesting aspect of Enright’s technical skill, and demonstrated her pitch-perfect ear for subtly nuanced and sharply perceptive humour that works on several different narrative levels.

11 thoughts on “Clothes in Anne Enright’s ‘The Green Road’”