Edith Wharton’s nineteenth novel The Children, published in 1928, is less impressive than the others by her that I’ve posted about here recently: The House of Mirth and The Age of Innocence. It’s still interesting, and highly unusual in its central theme – the attraction an older man feels for a girl who at the time they meet is not yet fifteen.

Martin Boyne is a globe-trotting engineer who takes on projects in exotic places.
Wharton carefully presents him from the start as a ‘critical, cautious man… whom nobody could possibly associate with the romantic or the unexpected.’

This complacent timidity is about to be sorely tested when a troupe of seven children with their nanny boards his ship and he first sees the eldest child, Judith, who acts as surrogate mother to her siblings and ‘steps’, as the offspring of her feckless parents’ numerous other marriages and acquired stepchildren are known.

“Jove – if a fellow was younger!”
Men of forty-six do not gasp as frequently at the sight of a charming face as they did at twenty; but when the sight strikes them it hits harder…it rather disturbed [Boyne] to be put off his quest by anything so out of his present way as excessive youth and a rather pathetic grace. 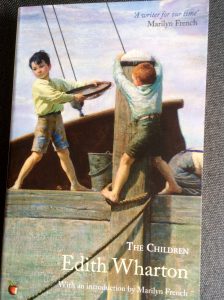 Wharton is often unfavourably compared to her friend and mentor, Henry James, and at times she did indeed imitate his sophisticated psychological probings of his characters’ subtly described thoughts and actions, and he too was to explore the girl-woman type in a corrupt adult world in stories like ‘What Maisie Knew’. As the above extract shows, however, she writes here in a plain, even colloquial style, and makes little attempt to explore her male protagonist’s musings; they are simply presented to us as free indirect discourse, with no narrative comment. Neither does she enter into Judith’s mind: we’re simply told frequently how ‘charming’ she is, and are given her animated, precocious but often immature dialogue.

This sets up the central feature of the novel: Boyne’s vacillating motives and impulses are largely a mystery even to himself, and it is this that gives the novel its most compelling aspect.

Boyne quickly learns that these are the children of Cliffe Wheater and his wife, whom he remembers as ‘rather aimlessly abundant’ – an apt description, we later learn – both of whom he had known at Harvard and subsequently in ‘the old social dance of New York’. Wheater had since become ‘one of the showiest of New York millionaires’ whose only interests since his marriage had been in ‘Ritz Hotels and powerful motor-cars’ – and a ‘steam-yacht’.

It’s the depiction of this egregiously selfish, idle and shallow rich set that’s another of the most interesting and successful features of this uneven novel. They pass their time trying to stave off boredom by following each other from one fashionable Mediterranean watering hole to another, indulging in ‘wasteful luxury’ on the quest for pleasure, while flirting, divorcing and sleeping with each other and neglecting their children. This is very much a Divorce Novel, dealing with ‘the compromises and promiscuities of modern life.’

Their children are allowed to run wild, largely untutored. Judith, we learn, is barely literate, and one of her closest friends had killed herself while her drug-addled mother and Judith’s were ‘heaven knows where’.

Boyne is shocked to learn, early on, that one of the Wheater children, Blanca, had been engaged ‘to the lift-boy at Biarritz’ when at the time of meeting her she’s ‘barely eleven’. Judith blithely points out that she’d been engaged to ‘a page at a skating-rink’ at about the same age. The guidance that their corrupt parents should have provided is non-existent, and they have become superficially sophisticated, but profoundly morally adrift – like their parents.

Not surprisingly the Wheater children and their antics dominate the novel. The trouble is I didn’t find them at all amusing or charming. There is some distasteful national stereotyping about the two who have an Italian parent – they are lazily presented therefore as volatile and passionate (‘”don’t be foreign”’, their nurse admonishes one of them at one point – I don’t find this as funny as Wharton seems to expect me to). The ones with circus-performer parents are forever engaging in acrobatics. They are consistently depicted with just their one identifying characteristic. Blanca is obsessed with ‘chic’ couture dresses; her twin, Terry, is studious and sickly. Zinnie, whose mother is a glamorous movie-star, is vain, sly and selfish.

Their dialogue is set out with toe-curling whimsy: the first example of many occurs when Martin offers the children oranges as an incentive to visit a cultural site and this exchange ensues:

Although like Martin we feel sympathy for their plight, left to fend for themselves as their fickle and crassly materialistic parents pursue their hedonistic and amorous adventures – they are aptly called ‘hotel children’ – their histrionic antics become tediously repetitive, their attitude importunate, manipulative and greedy, as cartoonish as their parents’ .

The plot is driven by Judith’s fierce maternal devotion to her little brood, and her passionate attempts to keep them together, while their various parents change partners and threaten to take back the offspring who originally belonged to them.

When Judith and her wild bunch of siblings burst into Boyne’s tranquil, adult world, he loses all sense of decorum and judgement, and takes on the role of guardian, apparently unaware of the probable true motive for his doing so: his sexual desire for adolescent Judith. Here he is as early as p. 35, when his attempt to cultivate in her a love of art and culture by visiting an Italian cathedral has ended in failure – she’s both bored and bemused by it:

…he was disappointed, for he was already busy at the masculine task of endowing the woman of the moment with every quality which made life interesting to himself.

“Woman – but she’s not a woman! She’s a child.” His thinking of her as anything else was the crowning absurdity of the whole business.

Here Wharton’s narrator offers a rare incisive comment on Boyne’s moral confusion, though even here it can be seen as his own self-castigating thoughts.

Even Rose points out to him that he’s in love with Judith, but he refuses to entertain the possibility. The portrayal of this pretty but vacuous girl is troubling: she’s too naïve and ingenuous to convince us that Boyne is attracted to her mind; she’s innocently childish and ignorant, despite her premature exposure to corrupt, amoral adult behaviour and decadence. Neither is she a Gigi type who will blossom under his tutelage. She has a certain impulsive charm, but Boyne’s real motive is clouded in his own mind.

One of the most peculiar scenes, which arouses in me a certain disquiet, is the one in which Judith turns to Boyne in a crisis and he plies her with two cocktails and a cigarette, and then realises this may have been ill-advised. What was he thinking?

Even worse is when Rose’s 60-year-old lawyer visits and Boyne watches him watching Judith as she sleeps during a country picnic, projecting his own desire jealously on to the slightly older man. The narrative as usual gives us his thoughts, which begin with his reflection that the girl ‘looks almost grown up – she looks kissable’. Then he turns his gaze on lawyer Dobree, the other man:

…it was manifest that Dobree’s thoughts were racing; and Boyne knew they were the same thoughts as his own. The discovery shocked him indescribably.

This duplicity is compounded when, that evening, Boyne tells Rose his suspicions:

“Dobree looks at her like a dog licking his jaws over a bone.”
“Martin — !”
“Sorry. I never could stand your elderly men who look at little girls.”

After this adolescent outburst Boyne goes on to ask sarcastically why Dobree doesn’t ask Judith to marry him if he’s so ‘dotty’ about the girl. He’s dumbfounded when Rose tells him Dobree has just proposed to her. The ‘tumult of his own veins’ turns to confusion at this announcement, and he laughs:

[but] his laugh had simply mocked his own power of self-deception, and uttered his relief at finding himself so deceived.

Rose goes on to tell him that Dobree said to her that he thought Boyne was in love with Judith; Boyne is furious:

“Shows what kind of a mind he must have. Thinking that way about a child – a mere child – and about any man, and decent man…as if I might take advantage of my opportunities to – to fall in love with a child in the schoolroom!”

Even Boyne at this point realises he’s protesting too much, as that little hesitation so tellingly indicates, and he sinks into a chair, ‘hot, angry, ashamed’.

Although the hedonistic selfishness of the parents’ circle is portrayed with venomous narrative power, none of the characters is rounded or fully convincing – they are types, not individuals. Only Boyne, who focalises the story throughout, comes across with any kind of complexity. But ultimately his self-evasions, emotional timidity and sexual murkiness are more annoying than sympathy-evoking.

That this worldly, middle-aged man should ditch a sophisticated and beautiful woman his own age, with whom we are often told he’s been in love most of his adult life, in favour of a callow child with a mildly pretty face and no depth of character, is a situation that’s presented with inconsistent success, as I hope my quotations reveal. Judith is no Maisie.

There is some excellent writing, however, and the novel is worth reading. For example when Judith escapes with her brood in search of Boyne’s protection, he and Rose are incredulous at the circumstances the girl describes that led her to adopt such an extreme course; she sums these up with the precocious perception of which she’s capable when examining the amorality of her parents’ circle:

“If children don’t look after each other, who’s going to do it for them? You can’t expect parents to, when they don’t know how to look after themselves.”

There’s poignancy in this child’s premature wisdom, expressed with such heartbreaking lucidity.

I’ll finish with one passage that is worthy of the earlier, more satisfying novels of Wharton’s that I’ve read. Here is Boyne about to meet Rose in the flesh after the interval of five years during which he’d travelled and worked, and she’d been widowed:

He could never think of her [Rose] as having been really young, immaturely young, like this girl about whom they were exchanging humorous letters, and who, in certain other ways, had a precocity of experience so far beyond Mrs. Sellars’s. But the question of a woman’s age was almost always beside the point. When a man loved a woman she was always the age he wanted her to be; when he had ceased to, she was either too old for witchery or too young for technique.

That aphorism with its symmetrically patterned syntax is a rare moment of an omniscient, observing narrative voice commenting with almost Wildean wit on Boyne’s psycho-sexual ambivalence, and it shrewdly shows him as both clever and perceptive while blind to his own defects of character: he goes on to admit to ‘a faint return of the apprehension he always felt when he thought of his next meeting with Mrs. Sellars.’ Maybe he was never really going to commit to her, and the dalliance with pert, pretty little Judith was more of an excuse to run away, and to resume his melancholy, solitary existence far away from messy human entanglements.

These are my thoughts. I’d be interested to hear if any of you had a different reaction.

Others to write about this novel include heavenali here, and Tom’s blog Wuthering Expectations discusses Wharton’s short stories in several perceptive posts here.