After Mike’s funeral last week I’ve had time to return to the stories in Closed Doors, from his own Polar Books imprint.

The second in the collection is ‘The Theorist’. Unlike ‘The Mad Mother’, written about last time, which was set in Switzerland, this one takes place mostly in Paris, and briefly in London. 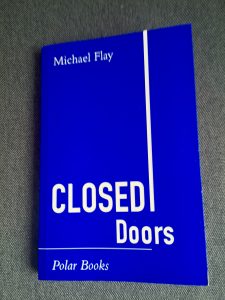 As usual in these short stories the protagonist and main secondary characters are unnamed: there’s ‘the Professor’, who’s part of an interviewing panel for an academic post at his university, and ‘the applicant’ – a man who has applied for the teaching post only because he needs ‘to survive, to have the wherewithal’, and hence has to ‘perform, catch a selector’s eye’ – whereas his instinct is to ‘baulk them’.

Also in keeping with the other stories the setting adds to the bleak tone: the street outside is ‘gritty’, the panel of interviewers ‘ludicrous’. This is a world in which scholarly merit or integrity has no virtue: all that matters is to be fashionable and commercially active – and maybe sexually deviant. The Professor-theorist has made a name for himself by riding the crest of the postmodern, post-structuralist wave of literary-critical, jargon-filled theory. He has ‘banished experience from the text’:

All was cynicism, he was well paid. What did it matter if he talked nonsense? Hadn’t the greatest grown jaded and found communication impossible?

Maybe an echo of Yeats there. The disaffected applicant moves on, possibly to Brussels:

He’d just ride on. You just did things. He’d studied, but what he knew was out of key with the fashion…He had no market value.

For this is the world of the market – that repeated ‘just’ is telling. The protagonist is a modern urban equivalent of the samurai who casts his sword into the air at a crossroads to see which path to take, or the drifting cowboy, homeless, friendless and seeking some kind of contingency, security.

The theorist is a paedophile with a taste for boys, like the early Romans, an indicator of his morally nugatory state. It’s a socio-ethical corruption he shares with other senior figures in London with whom he fraternises: a financier, a minister – that is, the worlds of commerce and politics are equally destitute morally, depraved. I find the equation of sexual deviance with moral destitution one of the weaker aspects of this writer’s position.

But these are general themes that recur in Mike’s work. His is a world view that shares some of Kafka’s despair and the hopelessness of Camus. It could maybe do with a little of Beckett’s humour.

The visions of the blood-soaked battlefields of two European wars create a grim backdrop to the images of Nazi troops in occupied Paris, of Goebbels with his PhD thesis on ‘romantic poetry’. Literature and art has been subsumed by the monsters, and the crowd has followed.

The next story, ‘The Dancer’, has a lighter, more romantic tone.

As always, contact Polar Books via Facebook if you’d like to obtain a copy of Closed Doors, or any of Michael Flay’s other works of fiction.