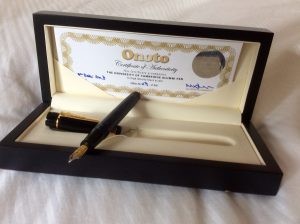 A diversion from books for today’s post. My wife bought me a lovely Mont Blanc fountain pen for a special birthday four years ago, and I became obsessive about fine writing instruments. I subsequently bought myself an Onoto (more on that shortly), and a beautiful red lacquered Nakaya Aki-tamenuri, made in Japan. The design at the top of my blog’s homepage is a photo of the first two of those pens. A handsome green Pelikan Souverän M800 followed on another birthday.

Here’s an account of the history of Onoto, adapted from their website (from where most of the images are taken).

In 1905 British company Thomas De La Rue, printers of stamps and banknotes, was approached by George Sweetser, an outstanding Mechanical Engineer and Inventor, with a self-filling safety fountain pen which he had recently patented. 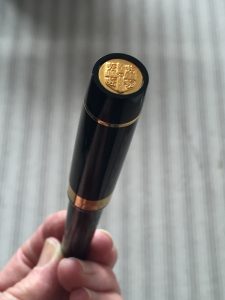 The nib is as beautiful as the pen: 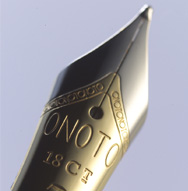 And it writes as smoothly as could be; I derive enormous pleasure from writing with it and with my other fountain pens. Never thought I’d become a pen geek. I also like mechanical pencils, but that’s another story…

10 thoughts on “Aside: Onoto fountain pens”