I write this in Berlin and it’s 31 degrees and heavy humidity presages a thunderstorm, so this will have to be hastily done – especially as two young grandchildren need my attention soon.

I wrote recently about the significance of clothes in Anne Enright’s novel The Green Road, inspired by Moira’s blog Clothes in Books. Today I’ll look at a scene early in Ivy Compton-Burnett’s (1884-1969) 1953 novel The Present and the Past. Earlier this year I considered her 1939 novel A Family and a Fortune, and noted her extraordinary capacity for extended scenes written entirely in dialogue – more like a play script than conventional prose fiction. Her affinity with Jane Austen in this respect has often been noted (this includes her focus on upper middle-class families in a historical period slightly earlier than the one in which she wrote). 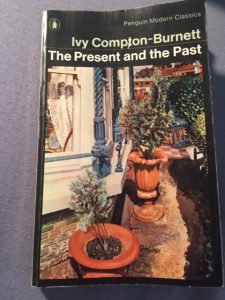 In The Present and the Past the plot, such as it is, deals with the seismic effect on the Clare family of the paterfamilias Cassius’ first wife, Catherine, whom he divorced nine years earlier after five years of marriage, and two sons – Fabian, now 13, and Guy, 11 – reappearing with the announcement that she regrets her decision to yield custody of the boys to their father, and expressing the wish to be able to see them whenever she wishes. Cassius’ second wife, Flavia, is understandably unhappy with this development, but is generous enough in spirit to accede to the demand.

Early in the proceedings we see some of Compton-Burnett’s incisively drawn scenes in which the children talk and interact with each other with precocious poise. In these she throws satiric light on the foibles of the adults who squabble and fret around them.

Cassius and Flavia had three children of their own together: Henry, 8; Megan, 7 and Tobias, 3. In this passage we meet Miss Ridley, their stereotypically starchy governess. In the opening pages they outwit her by talking metaphysics in the context of the imminent death of a hen, moving on to demolish her limited attempt to explain Darwinist theories of evolution (a key feature in Compton-Burnett’s fiction, along with Nietzschean power struggles).

In a rare passage of narrative description, here’s how Miss Ridley is presented:

Miss Ridley was forty-seven and looked exactly that age. She wore neat, strong clothes that bore no affinity to those in current use, and wore, or had set on her head an old, best hat in place of a modern, ordinary one. She was fully gloved and booted for her hour in the garden. Her full, pale face, small, steady eyes, non-descript features and confident movements combined with her clothes to make a whole that conformed to nothing and offended no one. She made no mistakes in her dress, merely carried out her intentions.

The outward appearance is used to suggest the woman’s inner nature. The adjectives that describe her clothes – ‘neat’ and ‘strong’ – are satirically ambiguous, suggesting utility and durability, rather than aesthetic qualities, as the rest of that sentence goes on to show.

The note that her has is ‘set on her head’ rather than worn there further suggests a physical awkwardness and disjointedness with her time –  the added detail that it is outmoded reinforces this impression. Wearing her ‘old’ and ‘best’ hat in the garden tempers this slightly snobbish account by indicating that it’s probably her only hat; she’s poor. Our sympathy is now partially invoked, while we are shown at the same time her limitations of character and intellect.

Added to this is the detail that she’s ‘fully gloved and booted for her hour in the garden’: she’s more in thrall to propriety than to common sense or individuality of expression.

The next set of adjectives, about her face, eyes, ‘features’, ‘movements’ and ‘clothes’, do nothing to contradict this growing image of a narrow-minded, cribbed personality. The portrait is rounded off with that killer ending: the whole conforming to nothing and offending no one. She is deeply conventional and full of a conviction that she is just as she should be in her submissive role as governess – hence her inability to conform to anything, for this would be to commit herself to something, and her status and nature forbid her to do such a thing. She must be firm and narrow with the children, teaching them what she can from her limited range of knowledge, but ultimately remain inoffensive – and servile. Hence the lack of ‘mistakes’ in her ‘dress’: they signify the ‘intentions’ I’ve just outlined. She is in the invidious position of having to set an example but possessing no social identity.

I find this portrayal brilliantly suggestive. It seems at first sight a little cruel and patronising to a woman whose status at the period in which the novel was set, which seems to be Compton-Burnett’s favourite – late Edwardian or slightly later – would have been ambiguous: neither a servant, nor an equal to her employers. The children are astutely aware of this, and they regularly run rings round her emotionally and intellectually, as practice for their interactions with their trickier, more complicated parents (and contriving stepmother).

This description, then, isn’t just an ostentatious display of waspish, Austen-light character-sketching; it’s symptomatic of Compton-Burnett’s exploration of class and family dynamics. I hope to go on in later posts to examine other aspects of this interesting novel.

4 thoughts on “A whole that conformed to nothing: clothes in Ivy Compton-Burnett’s ‘The Present and the Past’”