In her entertainingly eclectic blog ‘Finding Time to Write’,Marina Sofia recently wrote a salutary post about blogging: she eschews the advice of ‘social media experts’ and ‘cookie-cutter’ advice from ‘experts’, and advocates her own approach, which is pretty much to write what she damn well likes, when she likes. I like this philosophy, and abide by it myself. 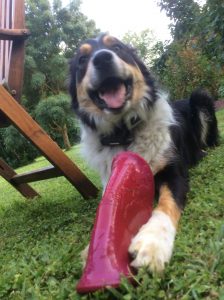 Jerry the dog in his Languedoc garden, urging me to throw his frisbee

My regular reader will know that I’ve posted almost every day recently, since returning from my Euro travels (no pictures of elegantly crested parrots this summer, sadly, but I did meet a lovely dog called Jerry). This reflects the fact that I’m currently on leave from the paid job, and have more time to write for the blog.

Like most of those who commented on Marina’s piece, I know I risk alienating my readers by overwhelming them with material. I hope I don’t; readers are sensible people, and will skip items that don’t appeal. I just enjoy writing them, and hope you enjoy reading them.

So here I go. Yesterday I posted about some rather arcane ecclesiastical-liturgical words. Now for something more mundane…

A couple of words entered my mind on the flight home from Brussels. The First Officer, when giving his usual welcome announcement before take-off, referred to the cockpit of the plane. The flight attendant, during the flight, made an announcement about walking through the plane’s cabin. These words intrigued me.

Cockpit: why name that part of the plane after an arena for fighting game birds? I decided to explore…

OED online: (I’ve omitted much of the detail, and given a few of the more interesting [to me] historical references.)

1. A pit or enclosed area in which game-cocks are set to fight for sport; a place constructed for cock-fighting.

†b. Applied to a theatre; and to the pit of a theatre. Obs.

Can this Cock-Pit hold The vastie fields of France? Or may we cramme Within this Woodden O, the very Caskes That did affright the Ayre at Agincourt?

Naut. The after part of the orlop deck of a man-of-war; forming ordinarily the quarters for the junior officers, and in action devoted to the reception and care of the wounded.

1769   W. Falconer Universal Dict. Marine   Cock-pit of a ship of war, the apartments of the surgeon and his mates, being the place where the wounded men are dressed.

1813   R. Southey Life Nelson II. 258   The cockpit was crowded with wounded and dying men; over whose bodies he was with some difficulty conveyed.

Now here’s the bit I was looking for:

I suppose it’s obvious, then, that it’s used as a sort of spatial metaphor, signifying the rather cramped conditions and enclosed nature of the space where the pilot(s) sit…This would explain the next entry, for similar reasons:

Motor Racing. The space in a racing car occupied by the driver.

Next I turned to:

[I like that use of ‘gondola’ for the basket part of an airship. Poetic.]

Applied esp. to the mud or turf-built dwellings of slaves or impoverished peasantry, as distinguished from the more comfortable ‘cottage’ of working men, or from the ‘hut’ of traditional African homesteads, or the temporary ‘hut’ of travellers, explorers, etc.

†3. A cell: e.g. of an anchorite or hermit, in a convent or prison; a cell of a honeycomb.

A room or compartment in a vessel for sleeping or eating in. An apartment or small room in a ship for officers or passengers. Also in an aircraft or spacecraft.

Ok, so it’s another spatial metaphor: the plane’s ‘cabin’ is of necessity confined, cribbed…of course! That’s why these words were niggling in my mind. I was thinking of Macbeth, and the line that’s become a cliché: back to OED online:

3. To shut up or confine within narrow and hampering bounds. (Mostly after Shakespeare [see, I was right].)

1871   E. A. Freeman Hist. Norman Conquest (1876) IV. xvii. 58   The newer foundation was cabined, cribbed, and confined  in a very narrow space between the Cathedral Church and the buildings of the City. [There’s the evidence of the cliché: it’s almost impossible to use ‘cabin’ as a verb without adding the other two synonyms used by Shakespeare]

So there we are: the two words are a consequence of our language’s fondness for metaphorical neologisms and coinages – especially when Shakespeare can be tapped into.

Let’s finish with another picture of my much-missed canine friend, Jerry: 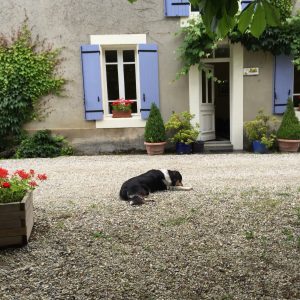 6 thoughts on “Asides: cockpits and cabins”