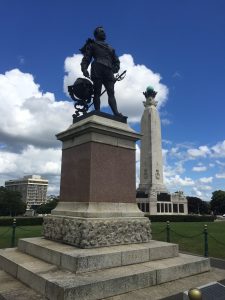 If you’ve read this blog recently you’ll know that one of my oldest friends died in May. Michael Flay’s works (reviewed by me) and contributions have featured many times over the years here. He and I used to meet several times a year to talk. Usually it was somewhere between Cheltenham, where he lived, and Truro – most often Plymouth (Bristol and Exeter also, sometimes).

We always travelled by train to these meetings; Mike loved railways. Yesterday I went on a poignant, solitary trip to Plymouth to meet with him in his absence.

Having arrived at Plymouth station concourse at noon, I paused to scan the Arrivals noticeboard. There was the train Mike would have caught: the 13.01 from Cardiff. I would usually wait in the garish buffet over a coffee. I looked towards the barriers, half expecting to see Mike’s customary approach and greeting. Of course, it wasn’t to be. 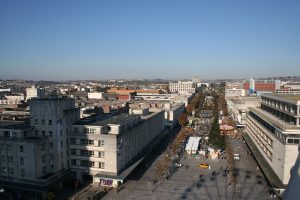 Through the arid shopping precincts of the city (Mike would have called them ‘zones’), rebuilt by modernist zealots after the destruction of the blitz – aimed inaccurately at the naval shipyards – during WWII.

I walked to the Waterfront, a striking art-deco bistro-pub on a terrace right beside Plymouth Sound. To get there I pass over the 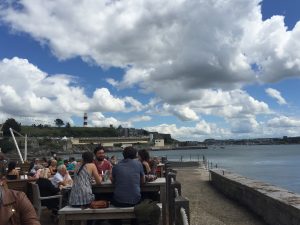 Hoe, with its stiff statue (see above) of an implausibly theatrical Drake (born in nearby Tavistock), bowling-ball in hand, gazing out implacably towards the expected, despised, ‘invincible’ Armada.

From below the Pilgrim Fathers set out on their puritanical way in 1620 to New Plymouth in New England – the second settlement there. Hence the accent: the West country English burr. 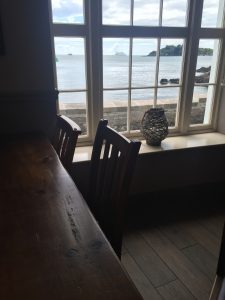 To the West, the estuary of the Tamar, border with my county, Cornwall. To the east, the Plym. Across the broad entrance to the Sound stretches the Breakwater, which has protected the haven since 1814.

Like a whale’s back in the middle of the Sound looms the granite bulk of Drake’s Island. 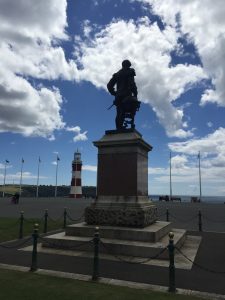 By Drake’s statue the red-and-white striped lighthouse, Smeaton’s Tower, named after its designer, and built by Cornish miners in 1759. Originally located 14 miles offshore, the second of the famous Eddystone lighthouses, it was dismantled and reassembled on the Hoe in 1877, two thirds of its original height. Tourists can now climb to the top to admire the panorama. The tower even has its own Twitter account (@SmeatonsTower).

We used to catch a cab to the Waterfront and have a couple of beers. Mike invariably ordered a burger, but he only ever ate half of it. 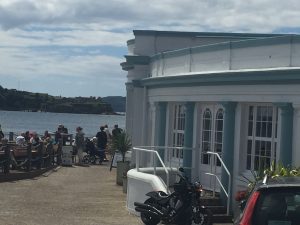 The curving facade of the Waterfront and its terrace, with Plymouth Sound behind

It was warm and sunny enough to sit outside and admire the view across the bay. The terrace was almost destroyed in the winter storms a couple of years ago, so we’d taken to spending our lunchtimes at what Mike called ‘the colonial hotel’, about which more later. Sadly, the Waterfront didn’t reopen in time for us to have one more rendezvous there.

A young man with a handsome whippet called Carlos joined his father at the table next to mine. We chatted. The father was from Belfast, and was delighted to hear that my ancestors came from that city. Carlos watched us with canine dignity. 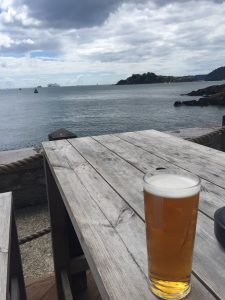 Brittany Ferry in the distance, entering the Sound

As we talked I noticed the Britanny Ferries ship approaching. It passed close enough to see its name: ‘L’Armorique’. Plymouth has long been an important trading and naval port, with a busy ferry service to Britanny and Santander, across the choppy Bay of Biscay. Armorica was the ancient Gaulish name for that French peninsula which features so often in Arthurian legends. An apt reminder of the cultural and ethnic links between Old and New Britain (as Geoffrey of Monmouth called Britanny). 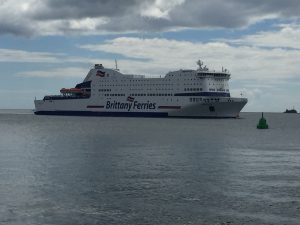 Mike enjoyed coming to this place: as a child he’d spent many family holidays at the beach resorts nearby, and often visited Plymouth with his parents. I drove us to Cawsand, Kingsand and Whitsand Bay on one occasion when I came by car to meet him. We’d also visited Dartmoor – we liked the grim prison at Princetown, and once had a coffee in the dour café in the village. 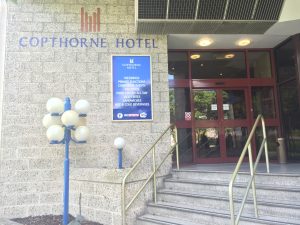 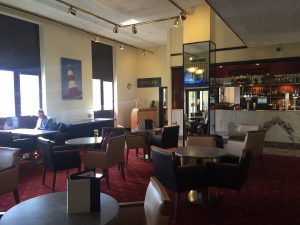 Back through the shopper-thronged precincts to the hotel bar, our more recent haunt while the Waterfront was rebuilt. It’s an unprepossessing concrete structure, but has a comfortable bar, and does adequate food. This is where my last obituary piece arose: the Sky News with sound off, subtitles scrolling, relating Cameron’s last PMQ session, and the forced jollity of the debating chamber’s farewell to the outgoing Prime Minister.

On the train home I considered whether this had been an uplifting pilgrimage, or morbid wallowing in sadness. On balance I think it was the former: cathartic. I felt his presence, like Eliot’s shadowy figure, the ‘third who walks always beside you’ from the Waste Land, and was able, in some way, to feel we’d communed.