[Audio version of this chant to encourage the Man Engine to rise: HERE – from Man Engine website, home page HERE] 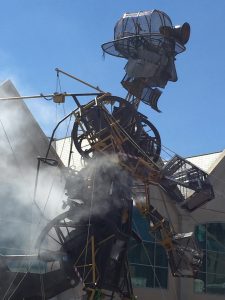 I posted recently about the rousing progress through the county of Cornwall of the Man Engine, Britain’s biggest ever mechanical puppet. It was more than just a nostalgic entertainment: it was a poignant and salutary reminder of the difficult, dangerous, often fatal work undertaken by the Cornish miners, and of our mining heritage here in the county in the far SW of England.

This is the stirring anthem sung by the choirs and crowds as the Man Engine ‘transformed’ from his prone position to his imposing full height of over ten metres.

[NB the full story about the characters named in the song can be read at the Man Engine website HERE. Words highlighted in RED in the lyics are commented on afterwards, below]

One and all we’ve always been

Cousin Jacks both great and small

Raise your voice, sing One and All

Round this world we send our call

‘Health to the Cornish Miner!’

Deep and dark down Caradon Mine

Alfie Crowle he made his name

One foot dancing one foot tied

Our Jane Harvey’s a Foundry maid

Deals get done and money gets made

Hard rock mining involves the excavation of metal mineral ores such as tin, copper and gold, unlike soft rock mining, such as for coal.

Cousin Jacks was the nickname for émigré Cornish miners from the USA to Australia, once the great diaspora began in the mid-19C, when the copper began to be mined out and the market for other minerals became too volatile for it to continue to be economically viable in many Cornish mines. More info at this BBC site (archived), and HERE. 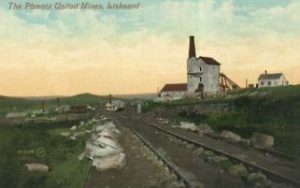 Phoenix Mine, from a 1908 postcard: Wikimedia Commons public domain image

South Caradon copper mine lies high on the granite dome of Caradon Hill up on Bodmin Moor. It closed in 1886. The song could refer to any one of the other mines in the vicinity; this whole area is still full of the remains of engine houses, chimney stacks, waste heaps, quarries and other mining industrial archaeology. For links to relevant websites and a short illustrative video visit HERE – Cornish Mining Heritage website, Caradon site

Cornish pasties, the pastry-cased pies crimped down one side to hold it together, were the miners’ traditional lunch or ‘croust’. Beef and potato were the staple filling, often mixed with onion and swede, although many other ingredients have been controversially substituted. Some mines had a hot oven up top in which the pasties could be kept warm until lunchtime. The owner’s name would often be inscribed in the pastry to facilitate identification. Some miners would reserve a small corner to leave for the ‘knockers’ – the mischievous ‘little people’ of the mines, believed to cause all kinds of mayhem and bad luck if not placated by these human intruders into their subterranean habitat. I believe the ‘empanadas’ of Argentina, Chile, etc., are S. American pasties based on the recipes the emigrant Cornish miners imported there when they took to working in the mines there after the diaspora.

Jane Harvey was the daughter of John Harvey from Hayle, in west Cornwall. In 1779 he established a foundry and engineering works there. He worked there with Richard Trevithick (1771-1833, born to a mine captain and miner’s daughter in a village near Camborne, inventor of many high-pressure steam-powered devices and locomotives, including improved versions of Newcomen and Watt’s earlier mine pumping engines) and other leading engineers. In 1797 Jane married Trevithick.

Harvey’s became the main mining engine foundry in the world, with an international market served through their own port at Foundry Town, Hayle.

Harvey’s of Hayle reached their peak in the early- to mid-19th century and then, along with the Cornish mining industry in general, suffered a gradual and slow decline.  The engineering works and foundry were closed in 1903, although the company continued to trade as a general and builder’s merchant, eventually merging with UBM to become Harvey-UBM in 1969 [adapted, including links, from Wikipedia]

The White Hart building, established in Foundry Square, Hayle in 1838, was built for Jane and Trevithick by her brother, who succeeded his father (died 1802) as the foundry’s owner. It still stands, an imposing sight, and functions as a hotel.

For a 12-min film of the singing as the Man Engine ‘transforms’ by Gray Lightfoot, see this YouTube site. A shorter one by Mel Potter from the Geevor Mine visit, see HERE