After a not entirely satisfactory encounter with 19C Spanish fiction as represented by La Regenta (I wrote about it here and here) I turned with some trepidation to an old Penguin Classics edition of Benito Pérez Galdós’s 1888 novel Miau. The experience was mixed once again. 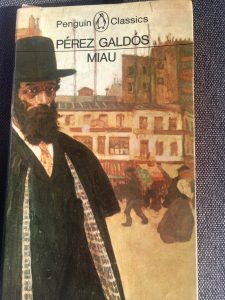 It’s a sobering, depressing plot: Don Ramón Villaamil has become a ‘cesante’ – a functionary in the immense bureaucracy of the Finance Ministry of the Spanish Restoration period who has lost his post with the fall of the political administration which appointed him. After nearly 35 years of service he’s been made redundant, just two months short of the pension which would have sufficed to provide for himself and his family.

And what a family. His waspish wife, the ironically named Doña Pura, is a spendthrift, whose mania for showing off her fading finery in the Madrid opera houses eclipses any inclination to be a housewife. Her sister Milagros (ironic name!) abets her in her tyrannical control of this household. Their unattractive daughter Abelarda (another aptly ironical name) is too timid and retiring to exert any control over anyone or anything.

Only Villaamil’s grandson, ten-year-old Luís, brings him any consolation. But the little boy is a chip of this old block. The grandfather is described early on as ‘an old consumptive tiger’, now with none of its former beauty ‘except its bright skin’ – he’s still capable of grumpy growling and self-pitying sulking, but he’s toothless.

The rest of the novel relates his increasingly humiliating attempts to beg money from former colleagues by writing letters to them, or by going the rounds of his former Treasury offices, seeking to gain favour and a new position by flattering, importuning or just being seen by his former subordinates and superiors – most of whom despise and patronize him. Those who don’t, find him a pitiable, abject figure.

It’s no spoiler to say this all ends badly for him. Too passive and introspective to play the aggressive role needed to persuade the new administration to employ him, he retreats ever further into himself, slowly turning from reluctant but persistent in his efforts to re-establish himself in the bureaucracy, to obsessive and manic – in the end conceding that he has become what these corrupt, self-serving pen-pushers see him as: a figure of fun, a deluded madman.

The narrative is often painfully slow moving, and the scenes in which this plot are enacted are often far too long and drawn-out. Spoken exchanges and Interior monologues tend to ramble on for pages.

This weakness is balanced by some genuine strengths – the qualities which have brought Galdós to be compared to Balzac and Dickens. I’d suggest he foreshadows Kafka in his bleak depiction of a gargantuan, labyrinthine bureaucracy whose main desire is to perpetuate its own lethargy and corruption, and which crushes anyone who fails to serve it in the manner it needs.

I’ll show some extracts, then, maybe more in another post, which represent him at his most compelling – but these moments are not frequent, there are many more longueurs.

In Ch. 3 Pura castigates her husband for not emulating his former subordinates, who by behaving like ‘scoundrels’ have gained promotions in the Ministry, while he has been ignominiously dropped.

She seizes upon the example of Cucúrbitas, a blundering incompetent:

He may be stupid, but he knows better than you how to push himself.

She despises the man, but admires his immorality: he takes bribes for settling accounts of the state’s clients. When the husband tries to quiet her, Pura continues, getting into her melodramatic stride:

‘How innocent you are! That’s why you are where you are, that’s why you’re poor and they pass you over. Because you haven’t a grain of foresight, and because you’ve been so careful about your blessed scruples. That isn’t honesty, let me tell you, it’s just obtuseness and stupidity.

She bitterly compares ‘honourable’ but unemployed Villaamil with this ‘dunderhead’ Cucúrbitas, concluding with the taunt that this fool will end up a director or minister – ‘And you’ll never be anything.’

She’s ‘warming to it’, our wry narrator informs us in a parenthesis like a stage direction (these dialogues are often punctuated like this, with long sequences of speeches given verbatim; Galdós was also a playwright, though more successful as a novelist). Why doesn’t Villaamil blackmail this administration by ‘coughing up’ scandal he knows about them and their ‘dirty work’, she says. She’d do it, and not care who got hurt. ‘Unmask all those scamps’, she exhorts, then he’d be found a post. But she knows he won’t, and castigates him for it.

Then she returns to more scornful abuse: he’s too full of ‘finicking and politeness’, politely deferring to these people. She moves in for the kill:

‘They just reckon you’re a nobody. But’ (raising her voice) ‘as sure as this light shines you ought to be a director by now. And why aren’t you? Because you’ve got no drive and no spirit, because you don’t count for anything, because you don’t know the way to go about things. Sighing and complaining won’t make them give you what you want.’

This tirade is relentless, her wrath like that of the ferocious sisters in King Lear, or Lady Macbeth’s when she tears into her husband when he shows reluctance to take decisive (ie murderous) action to fulfill their ambitions. Her final insults are vicious:

‘You’re harmless, you don’t bite, you don’t even bark, and they all laugh at you…It’s this honesty of yours that’s your undoing. Honesty is sometimes taken as just another word for foolishness….A man can preserve all the integrity in the world and still take care of himself and his family.’

Pura is blithely unaware of the illogical movement of her argument here, and it’s this showing of her pernicious nature that’s so effectively done: the narrator doesn’t have to explain or moralise – the author trusts us to see her as she truly is. Her hypocrisy and amorality are matched only by those of the bureaucrats she expects her husband to emulate – and yet she despises him for his refusal – or inability – to stoop to their kind of self-promotion.

There’s a grim humour in her preposterous, blistering assault on the submissive, ineffective ‘cesante’. He lacks the assertiveness and spirit that she is full of – he’s a worm that can’t turn.

That early description of the ‘old consumptive tiger’ is invoked in Pura’s diatribe. The message is clear: to get on in this corrupt world a man has to be ruthless. She fails to realise that she’s urging him to become the kind of bully who terrorises their little grandson in the opening chapter and elsewhere. Like Luís, Villaamil is too introspective and passive to fight back or stand up for himself against those who wrong him – yet he spends his time complaining about his fate.

This ambiguous dilemma and the way it’s dramatised in the novel are what redeems it somewhat from the tedious narrative sprawl. The modern world is complicated, and to swim with the sharks it’s necessary to become sharklike. Yet Villaamil isn’t portrayed as some Dostoevskian saintly innocent or idiot: he really is too passive for his own or his family’s good. There’s no redemption for the likes of him, and his loathsome, unfeeling son-in-law is his mirror image, a man who knows how to succeed, and has the morality of a snake. His name is, again, highly appropriate. He’s called Victor.

11 thoughts on “Honesty is another word for foolishness: Pérez Galdós, Miau”