‘Take your imagination for a dance’ 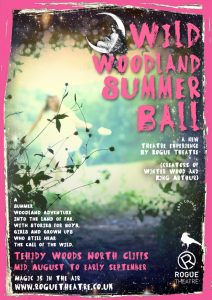 We’ve taken two grandchildren, accompanied by two of their Cornish friends and their grandparents, to Rogue Theatre’s ‘summer ball’ productions every summer for some four years now. They’re held in the beautiful Tehidy Woods, part of a 250-acre estate managed as a country park by Cornwall Council, near the cliffs on the north coast above Portreath. 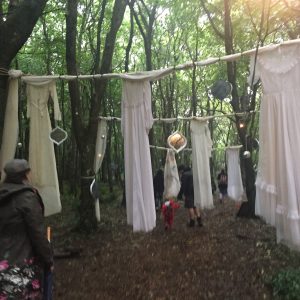 From the carpark you’re greeted at a box office (it’s a real box) by members of the company in costume who send the audience in batches along a magical trail through the woods. Along the way the trees are festooned with strange web-like hangings, decorated mirrors, framed paintings, distressed books, and all kinds of other paraphernalia, from clocks to lampshades. It’s a place where you could encounter anything. 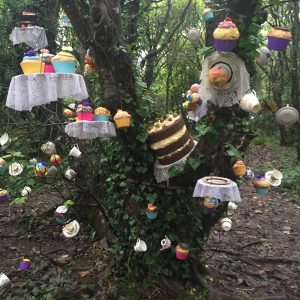 At intervals among the trees members of the cast sing and dance, or beckon the unwary into their world. Signs with enigmatic messages hint at the twilight zone into which you’re headed. 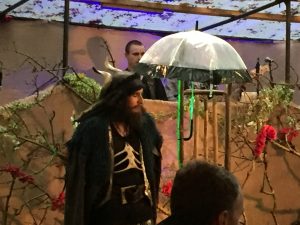 King of the Wild Wood

The path ends in a bosky grotto where you’re greeted by the wild, bearded, dreadlocked figure of the King of the Woods, whose long cloak, kohl-ringed eyes and curly horns lend him an other-worldly but regal, piratical air. He’s part ogre, part woodland spirit, but the twinkle in his eye, and his kind repartee with the transfixed children in our group, belie the scary aspect.

Every entrant into his grotto is challenged: Do you believe in the power of story? Do you want to pass through the door into his woodland kingdom? We each have our own story and are part of many more. 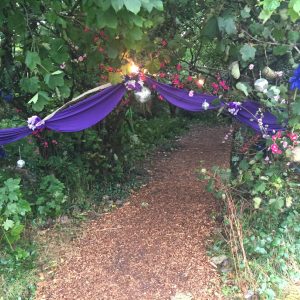 Hundreds of eager feet, from this world and the other, animal, human and faerie (and half way between), patter along the path in time with the beat of the wings of butterflies and birds.

Even the breeze dances, as it makes its way through trees, carrying stories and shimmering magic to the heart of the woods.

This is musical theatre in a similar mode to that of the Kneehigh company, about whose recent production about the love-life of the artist Chagall I wrote here recently. Rogue have their own special brand of high-energy, open-air entertainment. It’s based on music, dance and acrobatics rather than dialogue – though the story-telling also makes powerful use of prose and verse. The co-founder’s training with Commedia dell’Arte and in the circus is apparent in the company’s visual, physical approach to story-telling that doesn’t just engage the audience: it challenges and enthralls them.

This year there were four separate fairytale-type stories of enchantment. Like all such tales, they’re a challenging blend of magic and carnival and the biggest human issues: love and loss, separation and reconciliation, transformation, and life’s rites of passage, ending in the most comprehensive: death. Our eight-year-old granddaughter was spellbound throughout. Her brother, our ten-year-old grandson, sustained a cool veneer, but he secretly loved it. 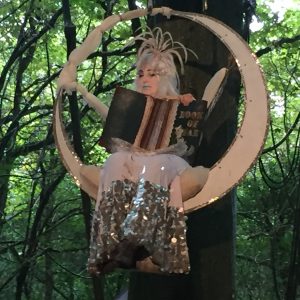 As always the King of the Wild Wood greeted us and introduced his co-narrator, the Moon, who was winched high into the trees on a silver trapeze-seat, from where she beamed smilingly down on the proceedings, and joined in with the tale-telling from time to time. The company began each section of the show with their now-familiar dance, and maddeningly catchy ‘Moon Song’ – a homage to her powers.

There was one tale about a pop-up curiosity shop, whose proprietor displayed a mysterious lack of zeal for selling any of her bizarre stock of pickled pets and alarming oddments. An even more enigmatic customer intrigues her. 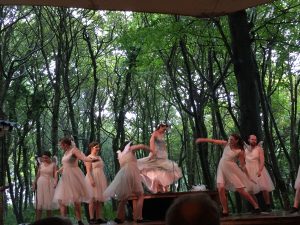 Can you spot the bearded fairy? 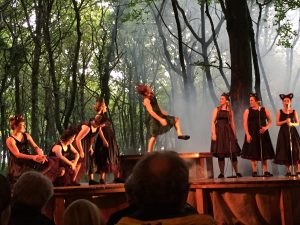 The stand-out item for me was the story involving a brilliant chorus of cool rapping cats. Second best was the troupe of white-clad, bewinged faeries, all glamorous, elegant girls, except for one with a bald pate and full gingery beard…He was having a whale of a time.

There was face-painting and wand-making with the cast in the interval. I spotted several unashamed adults among the eager youngsters waiting their turn for the glitter and paint.

The small company has an astonishing capacity to play multiple roles, and all are multi-talented dancers, singers and actors. Minimal costume changes convincingly transform each player, and at times it’s hard to recall what part they played in the previous tale, so completely do they inhabit each character.

The musicians are equally talented and versatile. The music ranges from contemporary pop genres (I’ve mentioned the rapping felines) to folk and traditional, with occasional rocking anthems for which the Woodland King sits at the drum kit and beats seven bells out of it. 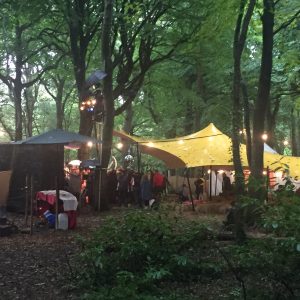 This year the rain didn’t dampen the spirits of the cast or audience. We were seated on hay-bales under a protective awning; the actors, real troupers, performed fully exposed to the downpour. Their infectious energy and commitment were a credit to them, and we all had a great time.

It was with some reluctance that we retraced our steps through the woodland that was transformed into something magical by this brilliant Cornish-based company’s imagination. They tap into and release the inner child in all of us.