Daddy had a number of guns, he kept them in the billiard-room, there was a revolver too, he was always threatening to shoot himself, his creditors or both with it, the big guns, some of them had double barrels to make it easy for bad shots and cross-eyed men, they were intended for shooting game, although quite often they were used on cats and people, towards the end of his life he got obsessed with the idea of shooting my red setter. 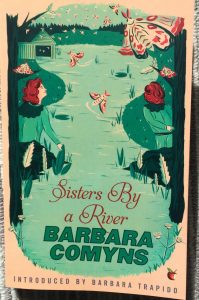 Recently I came upon a blog by ‘Heloise Merlin’, who writes enthusiastically about the weird mix of jauntiness in the narrative voice and the contrasting bleakness of the disturbing events this novel contains.

She rightly (in my view) sees the darkness beneath the ‘quirky humour’ and ‘affirmative attitude’ of that voice’s owner – just look at that opening quotation. I also like her identification of the idiosyncratic orthography [spelling mistakes, dodgy syntax] as that of a psychologically damaged adult, not the child it’s sometimes taken to represent. [The narrator gives several clear indications that she’s an adult, as we shall see – e.g. she reveals she’s married to one of the characters who appears fleetingly in the story].

So that makes sense: some of the lexical slips hint at underlying significances – though ‘Heloise’ doesn’t elaborate on this.

So here are some fairly random examples to illustrate/substantiate these points.

Mary was the eldist of the family, Mammy was only eighteen when she had her, and was awfully frit of her, but Daddy thought she was lovely and called her his little Microbe, I don’t know why, maybe microbes were just coming into fashion then like we have germs now. (p.6)

See what Heloise hinted at? The matter-of-fact ingenuousness of ‘had her’ for ‘gave birth’, the naive speculation about germs and microbes, non-standard spellings and colloquial ‘frit’ all indicate the quirkiness that’s Comyns’ signature tone. But that throwaway ‘Microbe’ reference, this early in the novel, foreshadows the parental viciousness, neglect and abuse that’s to come.

After she had had six babies at eighteen monthly intervals Mammy suddenly went deaf, perhaps her subconscious mind couldn’t bear the noise of babies crying any more…Mammy had always looked and been rather vague, she had a kind of gypsoflia mind, all little bits and pieces held together by whisps, now she grew vaguer still and talked with a high floating voice, leaving her sentences half finished or with a wave of her hand she would add an ‘and so forth’ which was a favourite expression. Sometimes when she was showing visitors round the garden she would suddenly come upon us playing some wierd game, she would look quite startled as if she had never seen us before and say something like this ‘The children, grubby, playing dont you know, such a number of them, I married very young, quite a nice governess’ and hurry her guests away, which was just as well because we had rather abomonable manners…(13-14)

Now the ‘vague’ mother is shown as equally culpable in her neglectful, scornful, hands-off attitude to her children. Her possibly psychosomatic deafness shows that she too isn’t unscathed by her husband’s cruelty and volatility (maybe he hit her and caused her deafness – the narrator is too detached to dwell on this. Her bland aloofness masks the turmoil beneath the narrative surface – but by including these details she hopes we’ll join the dots in a way she can’t endure to).

The following passages I think speak for themselves:

When Beatrix and I were about four, we did a frightful thing, we tried to ride the tame rabbits with the most drastic results, we had seen pictures of children riding rabbits and thought we could do the same, bur we couldn’t and for years people said ‘these are the children who squashed the rabbits.

One evening we elder ones returned rather late after a visit to the cinema, we were all kind of in a coma, degesting the film we had just seen, but we were soon rudely awakened, there was an awful uproar, Mammy was screaming and crying in the morning-room, and Daddy bellowing away like a bull, as we came into the room he hurried out without speaking to us, he locked himself in the billiard-room, always his stronghold during rows. Mammy was in the most frightful state, it was difficult to make out what had happened, she seemed almost crazy, and I felt all sick. (87-88)

I hated dancing class so much and had a kind of sick feeling in the pit of my stomach before I went, I called it dancing class feeling, and still have it sometimes, when I’m applying for a job, or getting married and similar occasions. (92)

There’s the evidence of an adult narrator. The juxtaposition of job application with marrying and the dismissive ‘similar occasions’ is chilling. Beneath the jaunty humour there’s a traumatised voice suppressing its pain. The loose syntax – all those dangling commas – dramatically heightens the sense of the narrator’s incapacity or unwillingness to differentiate between experiences that were terrifying or unnatural from those that were perceived as ‘normal’.

[From a chapter called ‘Dampness and Illness’] When we had not got colds there were plenty of things like measles and chickenpox to have, there always seemed to be someone in the family with measles, the Grownups didn’t get ill very often, Daddy did once get a stroke and go stiff all down one side, but he came loose again quite soon, the parrot missed him so much while he was ill it died, and we had a funeral, the next parrot wasn’t very nice, it smelt, Kathleen was supposed to clean it but she didn’t (133-34)

Illness is dismissed with the same airiness as other visitations on the children’s vulnerable young lives. That all are treated with equal (apparent) insouciance suggests a narrator flinching from confrontation with a more ‘grownup’ gaze at these damaging events. By describing the father’s stroke with the same lightness as having common childhood ailments, Comyns shows the emotional numbness that this chaotic upbringing inflicted.

It’s a powerful, dark, bizarre novel. Don’t be taken in by that intrusive, superficial ‘quirkiness’; this is as disturbed and disturbing as any fictional autobiography you’re likely to read.

My piece on Comyns’ Woolworths is HERE

7 thoughts on “Daddy had a number of guns. Barbara Comyns, Sisters by a River”