Those wonderful people at the British Library regularly feature on their ‘Medieval Manuscripts’ blog relevant ‘labours of the months’ and other beautiful materials from illuminated MS calendars in their collections, so here’s a flavour of some items for this month, November.

The London Rothschild Book of Hours (aka the Hours of Joanna I of Castile – a tenuous ownership connection; more detail at this link)

This is BL Add MS 35313, f. 6v: entry in Digitised Catalogue, with full apparatus on contents and links to images. Here’s their blog entry description of the scene:

Threshing and winnowing is taking place: in the background, a male figure wields a flail, beating wheat to separate the grains from the husks.  Two peasants in the foreground are beating flax to break down the stem fibres, while a woman to the right in the background is using a stick known as a ‘swingle’ to ‘scutch’ or dress the flax.  A woman is pouring swill out for the pigs, while doves and pigeons gather in the dovecote and on the thatched roofs of the barns waiting to feed on any loose grains. This month, marked by the Zodiac symbol of the centaur for Sagittarius, saw the celebration of several important festivals in the Christian calendar, each illustrated in the roundels to the left…

Here’s a link to a Jan. post on the BL blog which gives more background information on this MS and its provenance.

A comment on the blog post for Nov. finds a similar scene in this page (f. 12v, another calendar, made in Bruges c. 1515) from Morgan Library MS 399, which shows more clearly men working inside a ring of flax for beating, and behind them a woman engaged in the scutching process. In the village street behind, pigs and chickens feed – a seeming visual reference to the usual ‘pig-feeding’ image for this month.

The images on this site appear to be copyright, so I’ll simply provide a link here – but I’d urge you to take a look – there is clearly an iconographical pattern here which painters of illuminations for such scenes followed carefully – as did visual artists of hagiographical scenes – ie devotional images of the saints, many of which would be found in the relevant pages of calendars, as well as in stained glass windows, other devotional texts like legendaries, etc.

This image was tweeted today by @melibius, who kindly supplied the relevant link to the BL catalogue entry; it’s from BL Add MS 21114, the Psalter of Lambert le Bègue (‘the Stammerer’) of Liège, 1255-65 (though he died 1177; its provenance is the Béguine house of S Christophe, which he founded). Interesting departure from the usual pig-feeding scene here; less fun for our porcine friends this time – one’s been slaughtered, and the outlook for the other doesn’t look too good. 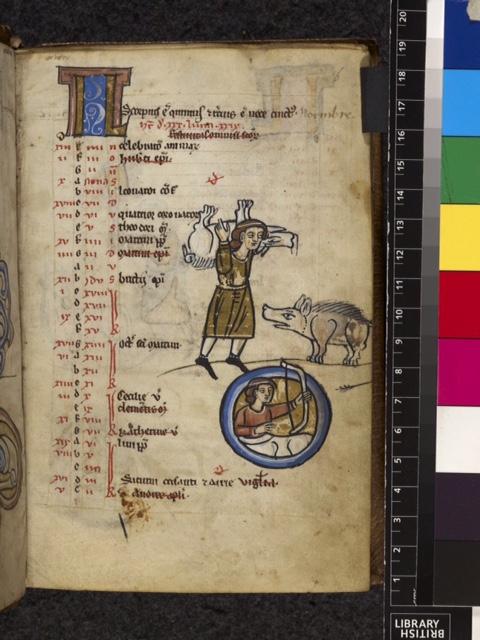 The image from the BL catalogue for the November page from the famous Bedford Hours also wouldn’t load when I tried it, so here’s a link to the BL blog dated today, in which this MS page is shown in full, with glorious marginal decorations, plus an enlarged detail of the pigs-with-acorns scene (and a centaur).

It follows the usual iconographic practice of showing a peasant knocking acorns from trees while pigs cheerfully snuffle them up under the branches. What the happy pigs don’t realise is that they’re being fattened up for slaughter in the winter. The borders are intricately and beautifully decorated with twining vines, with stylized leaves and flowers.

And April and May here)

In those posts I’ve shown the calendar pages from the Très Riches Heures du duc de Berry. Here’s the November page, which also shows the traditional pig-feeding scene for that season: 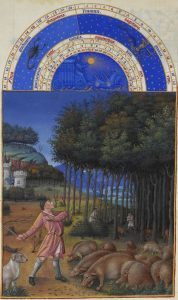 8 thoughts on “November pigs in calendars”