A novel about a young woman’s first ball? It’s an audacious premise, but Rosamond Lehmann carries it off with aplomb: my initial reaction is to say it’s in the spirit of Jane Austen, who also manages to take us right into the thoughts and feelings of her young women protagonists, with all their confusion, embarrassments, self-consciousness and wavering self-esteem.

In recent years fellow blogger Ali at her Heavenali site has written about pretty much everything Rosamond Lehmann has written, so I commend you to this post on Invitation

Her review is exemplary, so I shall instead turn to an approach I’ve used before: I’ll focus on Olivia’s clothes, appearances and looks, and how people look at her (and how she looks at herself), and the way they function to point up the drama in the narrative (an idea borrowed from the estimable Moira at her Clothes in Books blog). 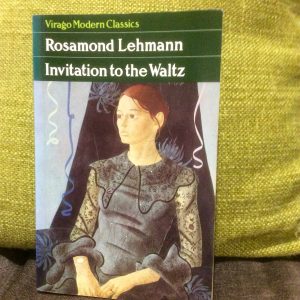 Olivia Curtis wakes on her seventeenth birthday wondering which jumper to wear – the crimson, or the fawn? Her confidence is frail; she’s acutely conscious that elder sister Kate is the family beauty, as the mirror shows her:

She cast a glance at her figure in the long glass; but the image failed her, remained unequivocally familiar and utilitarian.

Earlier she’d been optimistic, determined not to lapse into her usual sense of inadequacy in her appearance – determined to ‘glow’. But the mirror refuses to endorse this mood. Still, she’s starting to experience fitful glimpses reflected there of ‘a new self’, an emerging ‘stranger’ – I’m tempted to call her a dowdy duckling growing into – some kind of swan.

She changes. Looks again in the mirror. Stares into it. More flickering optimism…

But soon the impression collapsed: the urgent expectation diminished flatly…Nothing exciting was going to happen. There was nowhere to go: nobody: nothing to do. In the glass was a rather plain girl with brown hair and eyes, and a figure well grown but neither particularly graceful nor compact…But hope had sprung up, half-suppressed, dubious, irrational, as if a dream had left a sense of prophecy…Am I not to be ugly after all?

There it is: as the narrative drops into Olivia’s first-person voice she lets slip that unflattering adjective, negates it (after those adolescent, truculent complaints), hoping to face down her mirror’s effrontery.

This is good writing, and although I’m a man I can feel Olivia’s fierce desire to look mature, attractive and sophisticated, and her disappointment that her looks aren’t yet fully developed.

The theme of Olivia’s appearance is epitomised by the birthday present she receives at breakfast from her parents: ‘a roll of flame-coloured silk’ from which she’ll have her ball gown made. Her pleasure is deflated by her sister:

‘Yes, I chose it,’ said Kate languidly. Her taste was law. ‘What’s the good of putting Olivia into girlish shades? She’d only look sallow and ghastly.’

When the inept village seamstress, Miss Robinson, completes the dress, however, it’s an unflattering botched job. Once again it’s her sister who delivers the brutal truth:

‘Here. You’ve got it twisted.’ She gave a few sharp twitches to the waist and skirt…’It looks all right. Very nice.’

Her lie is transparent, and Olivia’s grief and humiliation are palpable:

But it was not so…Uneven hem; armholes too tight; and the draping – when Olivia looked at the clumsy lumpish pointless draping a terrible boiling-up, a painful constriction from chest to forehead started to scorch and suffocate her.

‘It simply doesn’t fit anywhere…I won’t go looking like a freak. I must simply rip it off and burn it and not go to the dance, that’s all.’

But then Kate points out she’s wearing it back to front. She turns it round:

It was not so bad. It dipped at the back, and there was a queer place in the waist where, owing to a mistake in the cutting, Miss Robinson had had, in her own words, to contrive it. But still, but still…if one didn’t look too closely, it was all right. Certainly the colour was becoming.

Olivia no longer feels a ‘caricature’ of ‘a young girl dressed for her first dance’, and ‘able again to compete with and appreciate others’. Then she looks at Kate, who truly does look lovely, and the doubts return. Kate is hardly propitiatory:

Side by side they stood and looked at their reflections. After a bit Kate said:

‘We set each other off really rather well, don’t you think?’ She thought, The younger girl, with her gypsy colouring, afforded a rich foil to her sister’s fair beauty.

The final third of the novel consists largely of dialogue with dance partners and other guests as Olivia’s humiliations continue: the young men are prigs and cads, selfish and heartless; her sister’s betrayals accumulate. But a chance encounter in the garden, where she’d fled the ghastly crowd of privileged, drunken rich boys, with Rollo Spencer, eldest son of the hosts, and then with his kind-hearted father, reveals to her what ‘real people’ are like: not obsessed with themselves and surface appearances.

This is her epiphany: it’s not what the cruel mirror of opinion reflects that counts; it’s ‘kindness, tolerance, courtesy, family pride and affection.’

I’ve started the sequel to this novel, The Weather in the Streets, and hope to write about it at some point soon.

18 thoughts on “The cruel mirror of opinion”