This novel continues the story of Olivia Curtis, whose first ball at the age of sixteen was the subject of Invitation to the Waltz (1932), about which I wrote recently HERE. Now ten years have passed, Olivia has married a disappointing man named Ivor, and separated from him two years before the novel opens.

Like the earlier novel, there is little in the way of plot — we simply see Olivia enter into a passionate, tumultuous affair with a married man (I’ll try to avoid spoilers). 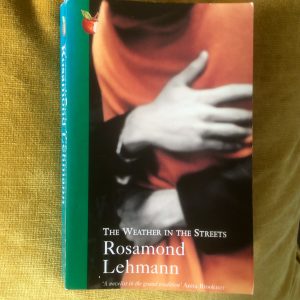 The married lover had also appeared in Invitation. His treatment of Olivia can be generous, chivalrous and romantic, but he also makes it quite clear that he loves his valetudinarian wife, a beauty who had miscarried and therefore forbids sex with him, convinced another pregnancy would kill her. This story looks suspicious when we see how things turn out. The man always places his whimsical wife’s needs first, leaving Olivia in pining solitude much of the time. We never gain insight into the wife’s true identity: all is filtered through what others say, especially her errant husband.

My initial problem with this scenario is that I found the man a selfish cad. He justifies his cavalier treatment of the smitten Olivia by saying he’s never promised her commitment, and that he likes to keep things ‘simple’. This he palpably fails to do.

Olivia, on the other hand, seems to lapse into the role of doormat. She indulges all of her lover’s moods, excuses his absences (and worse), and, if anything, shields him from pain and anguish, even when she’s suffering unspeakable hardship. When she undergoes an emotional and physical crisis, she prioritises his peace of mind at her own emotional (and material) expense.

I found her apparently submissive behaviour irksome at first. But at Bloomsbury Bell, blogger Naomi wrote that she too found this passive role reprehensible in a post-feminist world.

She also raises another possibility, one that I find plausible. Olivia enters into this seemingly doomed, dead-end affair to escape the conventional role expected of women like her. Her more beautiful elder sister, Kate, who we saw in Invitation was admired and envied by Olivia, has married (a man pointedly called ‘Rob’) and produced four children – the domestic life is shown to be draining away all her glamour, vivacity and spirit. The sisters’ roles are reversing.

Early in the novel this is revealed as so often with Lehmann in the free-indirect-discourse modernist style that slides into and out of third- and first-person narrative voices: it’s the moment early on when Olivia is visiting her ailing father. Kate is there at their parents’ house too. The mother sides with Kate, because she is more compliant, saying she’ll drink the soup their mother has made, while Olivia refuses it. Mother says to Kate:

As children it was always sensible Olivia who had the ‘big appetite’ and Kate was ‘the fussy one’.

They turn to the merits of women not being ‘scraggy’ or skinny, but ‘nicely covered’ , as Kate now accepts she is (my previous post about Invitation pointed out the focus on desirable female appearance and the importance of looks). But she adds, ominously, that ”as a matter of fact, Rob really prefers them on the skinny side.” Her mother dismisses this ambiguous statement as nonsense: ”Rob has far too much sense.”

Mrs Curtis’s manner conveyed an arch benevolent unperturbed reproach: for Kate, cured of that early tendency to tart defiance…had long since turned out entirely sensible and satisfactory. Kate, bless her, had slipped with no trouble into a suitable marriage within easy motoring distance. As the wife of a young doctor with a good country practice, a solid man, a man with a growing reputation…[but now] they were very cosy, very happy together…[ellipses mine].

The narrative focalises on Mrs Curtis here, taking on her voice (though it’s notable that Lehmann never does this with male characters), slipping into ever more fractured interior monologue:

A comfort, yes, a comfort, now that Olivia…now that [her son] James…phases, we hope; phases, of course…above all, now that [husband] Charles…Saved, but a ruin…I know it…Hush…Pass on. [ellipses in the text]

An unattractive model of the trials for women of married life: is this the kind of fulfilment to aspire to? It’s not surprising Olivia rejects it.

Her own marriage ended in disappointment: Ivor seemed a romantic artistic type, but fell short of her expectations. When she meets up with him again by chance when her affair is in crisis he’s superficially caring and attentive, but spoils it all by suggesting they give it another go – a prospect that appals her. Why turn into Kate, or her mother?

So the lover provides all the sex, companionship and conversation she wants. She’s prepared to forgo the usual benefits of commitment — or even of a true meeting of minds. True, she’s jealous of the languid wife, and longs to have a child of her own, but it’s a price she convinces herself she’s prepared to pay.

As she falls asleep in her parents’ house, in her old room, we are given a Molly Bloom kind of interior monologue. She’d never had a lover before, never tried ‘experiments’,

not because I’m cold, only because of love – because I believe in it, because I thought I’d wait for it, although they said schoolgirlish, neurotic, unfriendly…It was because of you [the lover]. I shall tell him all that. I’ll tell him…He’ll say: I feel the same, it’s worth not spoiling…He’ll say: Darling, I’m so glad…If he were here now…I want him here…[ellipses in the text]

As her thoughts shift to unsatisfactory sexual/emotional experiences with Ivor, they drift off towards the lover and his wife, she longs for his letter:

will it be speaking in his voice; saying darling, saying Olivia darling, will you…

Yes, I’ll say…Yes. Anything you say. Yes. [ellipses in the text].

I’m not convinced this entirely represents the kind of compromise/escape Naomi mentions in her blog post, though. This sounds like unadulterated, adulterous romanticism. Olivia is in love with love. Maybe not with the man. This attitude, she reflects dimly, is ‘schoolgirlish’, but also in some ways ‘neurotic’. Why ‘unfriendly’? To the betrayed wife? To potential lovers? Or to herself? As she lapses into sleep her thoughts are significantly ambivalent.

Now I’ve gone on too long. I’ll continue next time with some other suggestions about the intriguing possibilities to be found in this fascinating, subtle novel, and its frank, courageous exploration (portrayal?) of a young woman’s emotional and sexual yearnings and confusions. This is not the simple tale the married lover hoped for. Thank goodness.

8 thoughts on “A suitable marriage within easy motoring distance”