A while ago I wrote about the spiky charm of Barbara Comyns’ novel Sisters by a River; The Fountain Overflows is also narrated largely from the point of view of a child. Rose seems to be about six at the start of the novel, and is in her early teens by the end. It’s her ingenuously penetrating (and often disarmingly warped) insights into the lives of the adults around her, and sporadically sharp-eyed analysis of her three siblings and other children (‘We were quite little but we were already cunning as foxes’), that lend this narrative its pungency, acerbity and lopsided humour. Its stylistic and psychological naiveté are tempered by the maturer reflections of the narrator at the time of writing, fifty years later. 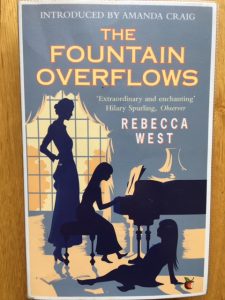 Mamma was not good-looking. She was too thin, her nose and forehead were shiny like bone, and her features were disordered because her tortured nerves were always drawing a rake over her face.

The metaphor there is typical of the flashes of menace and cruelty that serve as counterpoint to the surface childlike tranquillity of this dark domestic tragic-comedy. Rose never loses track of the family’s precarious situation, and the always imminent proximity of disaster.

A fleeting reference is made early on to the mother’s having ‘second sight’. When Rose first visits cousin Rosamund and Aunt Constance’s house, she and her mother calmly banish malevolent poltergeists by their very presence. Later, Rose is chastised by her mother for using her mind-reading and fortune-telling ability as a party trick. I found this supernatural aspect of the novel rather incongruous and grating.

Her improvident, handsome rogue of a father, who engages in a ‘lifelong wrestling match with money’, gambles and loses what little he earns as a writer. With his scornful manner he alienates the patrons who are impressed by his polemical articles, and dallies with women flagrantly. Yet Rose adores him; all the family do. That’s their problem:

My father, though very cruel, was very kind. [Two pages later:] He was often kind, but he was also ungrateful.

Rose is infatuated with him, but not blind to his selfishness and egregious faults: ‘Human relations are essentially imperfect,’ she muses on seeing a photo of him as a young man. Even his brave intervention to save a murderess, mother of one of Rose’s school friends, shows a thoughtless disregard for the possibly disastrous effect on his family this might have if he fails and goes to prison.

We were at first puzzled by the nature of the calamity that had struck our household. We had read a great part of Shakespeare and a good many novels but nothing in them had modified our conviction that Papa and Mamma could not have any very strong interest in each other, as they were not related by blood.

Precocity and childishness combine like this throughout the narrative, but somehow usually managing to avoid cloying (though I found Rose’s attempts to portray little brother Richard Quin as an angelic pet tiresome).

This is Rose on big sister Cordelia, towards whom she tends to harbour murderous thoughts:

At school, we noticed, she got on discreditably well. The wrong sort of teacher liked her in the wrong sort of way, and they were constantly giving her what they called ‘little tasks’ and mentioning her as an example of esprit de corps; and she spoke to them with an air of professed insipidity which we took seriously as a betrayal of childhood. Of course grown-ups wanted children to be blanks, but no decent child, with parents like ours, would encourage them. We saw her paying too high a price for the approval of people who were not Papa and Mamma, and we felt about her as a soldier in a besieged citadel might feel about a comrade who is meditating desertion. Quite often we hated her. But the love of the flesh which binds a family together in its infancy was still strong…Often we loved her.

Poor Cordelia is the only non-musical child, but mistakenly believes her equally talentless music teacher, the faux-bohemian, pretentious Miss Beevor, when she tells her she is a genius violin player. ‘Cordelia is such rubbish’, complains Rose to her Mamma. Cordelia smarts with indignation at the eccentricity and profligacy of the household, longing for normality and to escape: “We are being so badly brought up,” she shrieks at one particularly exasperated moment.

More than a saga about a wildly eccentric family, TFO is really about art, and in particular, music. All four children are trained as musicians by their mother as a means ultimately of earning a living – except for Cordelia, whose beauty they hope will net her a rich husband before she can make too much of a spectacle of herself attempting to perform in public.

This is Rose and twin sister Mary, near the end, discussing their enigmatic, much-loved cousin Rosamund, a beautiful but strangely passive, apparently unmusical girl:

‘…I say, Mary, do you understand Rosamund?’

‘Of course, we would find it easier to understand her if she were a musician too,’ I said.

‘Well, she may not be a musician, but she is what music is about,’ said Mary.

‘What is music about?’ I asked.

‘Oh, it is about life, I suppose, and specially about the parts of life we don’t understand, otherwise people would not have to worry about it by explaining it by music.’

This is the first volume in an unfinished trilogy of novels about the Aubrey family. I’ve ordered the next two.

14 thoughts on “What is music about? Rebecca West, ‘The Fountain Overflows’”