‘I have a husband now, I thought, a new daddy’.

This is Constance Schuyler (Dutch for ‘scholar’), now Klein (German for ‘small’ – an ominously symbolic start), on the first page of Patrick McGrath’s 2013 novel Constance. At no point is there any doubt that this is going to be a Freud-heavy account of a turbulent marriage of mismatched, needy people.

Both central characters, who take turns to narrate the story in their first-person voices, bring more baggage to the relationship than Antler. Constance (the ‘klein’ one, and not very constant in most respects) is haunted by the mysterious death of her beloved mother when she was a child, and the troubled (she sees it as cruel) upbringing by her controlling, unloving father – about as close to Big Daddy as a New England doctor can get.

So what should a young woman just turned 20 with ‘inner fragility’ and sense of self esteem do? Why, marry a man 20 years older who’s just like daddy, Sidney Klein (he’s the scholar; the reversal of the expected names serves no purpose, and if anything is just an ill-judged trick). This English expat literature professor is controlling, constrained. His patronising view of Constance from the outset is as ‘a work in progress’ which he’s confident he can complete, she’s ‘unformed and indistinct’, like his tedious academic study of the Romantics. It’s hardly surprising he’s blocked: he appears to be trying to analyse their poetry with the literary approach of a vivisectionist. It’s the only one he knows.

This novel is pretty good for about half its length. There are some well narrated set pieces, like the party at which Constance’s younger sister Iris meets Sidney for the first time, revealing herself to be wild, sexy and uninhibited – qualities Constance may well possess, but which she’s learned to suppress (along with most of her other impulses and memories). Descriptions of a decaying, dangerous New York City in 1963 are often vivid, especially the recurring scenes in Penn Station as it’s demolished and rebuilt, but soon become a tiresome metaphor for something, I’m not quite sure what: Constance’s marriage, maybe, or her psyche.

The alternating narrative voices overlap and repeat scenes with differently skewed perspectives. This technique is interesting at first, but then becomes another slightly irritating aspect of this ultimately disappointing novel.

Characters (and ghosts) come and go, but they fail to cohere with the events and lurid developments in the narrative. It all ended too pat for me, and too much resembled an early, minor Hitchcock film. The plot twists are melodramatic or soapy, the characterisation too contrived and clunky – though the Casaubon-like Sidney is oddly endearing (he drives a big Jag, like Inspector Morse, but with none of that detective’s gloomy charisma). The Schuylers’ ‘gothic horror house’ (yes, that’s what it’s described as at one point; there’s too much of that kind of narrative heavy-handedness) and Klein’s equally gloomy book-filled Manhattan apartment are too stagey, and the dialogue is largely stilted. 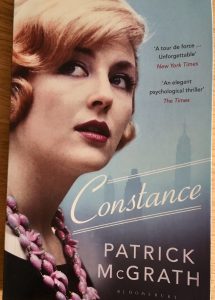 A pity – the only other McGrath novel I’ve read so far was Asylum (I wrote about it here last August), a much more satisfying gothic psychological thriller.

The edition I read was the Bloomsbury paperback. Not keen on that cover.