I felt as though I had tried to make a sword only to be told what a pretty pattern there was on the blade. [STW in a letter to her friend, David Garnett, cited in the Introduction to the VMC edition by Sarah Waters]

How galling it must have been for Sylvia Townsend Warner to hear people like her mother praise this impassioned protofeminist novel Lolly Willowes for its whimsical depiction of spinstery witchcraft in the Chilterns. 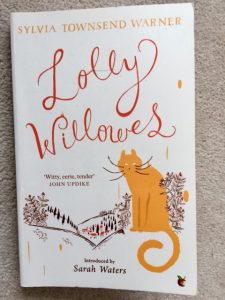 So much has been written about the plot, I won’t précis it here. There’s a succinct account and appraisal in Robert McCrum’s recent piece in the Guardian’s ‘100 Best Novels’ series (he places Lolly Willowes at no. 52), emphasising how it’s much more than a charming fantasy: it’s about a repressed, disregarded woman’s quest for personal freedom and for meaning in her life – without being beholden to any man, religion or social class or institution.

Sarah Waters’ introduction to the Virago Modern Classics edition – the one I’ve just finished – is found online, again at the Guardian website. It gives an excellent analysis of the novel’s impassioned themes of a woman’s struggle to be free in a patriarchal world soon after WWI, when the slaughter in the trenches was still a recent memory, and women’s new-found independence was being suppressed again, as it was in the Victorian and early Edwardian period.

Waters astutely positions the novel in a literary group containing both Lady Chatterley’s Lover and Virginia Woolf’s ‘A Room of One’s Own’.

The title of this post is from a quotation on p. 196, when Laura (the diminutive ‘Lolly’ – a name by which her family know her – sums up her lack of status or identity in the eyes of the world she inhabits) is conversing with her new master: Satan – the ‘Loving Huntsman’ as the novel’s subtitle calls him: a gentleman who once he’s netted his new witch’s soul, leaves her alone to revel in her liberated state [or is she in his thrall? Is she truly free even now?]:

One doesn’t become a witch to run around being harmful, or to run around being helpful either – a district visitor on a broomstick. It’s to escape all that – to have a life of one’s own, not an existence doled out to you by others, charitable refuse of their thoughts, so many ounces of stale bread of life a day…

Instead, she argues, women become witches ‘to show our scorn of pretending life’s a safe business, to satisfy our passion for adventure.’ This long section towards the end of the novel is one of the most powerful expressions of feminist polemic I’ve read in a work of prose fiction (Nora in A Doll’s House would understand Lolly implicitly).

Women, Lolly says to her satanic interlocutor (it’s an exchange reminiscent of Marlowe’s Dr Faustus when he first interrogates Mephistopheles), need to transcend the ‘dismal lives’ expected of them by society:

Women have such vivid imaginations, and lead such dull lives. Their pleasure in life is so soon over; they are so dependant on others, and their dependance so soon becomes a nuisance…And all the time being thrust further down into dullness when the one thing all women hate is to be thought dull…[On Sundays they are required to listen to church sermons on Sin, Grace:] All men’s things, like politics, or mathematics. Nothing for them except subjection and plaiting their hair.

What an act of wilful misreading by the author’s mother to see that as anything but a subversive call to feminist arms.

8 thoughts on “A life of one’s own. Sylvia Townsend Warner: Lolly Willowes”