This novel has the same deceptively low-key style and tone as that recent word-of-mouth hit, Stoner. My first reaction was that this is as good, if not better – perhaps because it compresses so much intensity of feeling into just over 150 pages.

It’s a tale of elemental, doomed passion in rural Illinois in the 1920s. Two neighbouring tenant farmers are as close as brothers. Then one falls in love with the other’s wife, and an affair starts. When the betrayed husband finds out, he kills his former friend. The lives of both families had already started to unravel; after the murder, they implode.

That’s not a spoiler: the fatal gunshot rings out on the first page. Two pages later we find out who shot whom, and why. This is not a murder mystery; it’s about what drives a pair of men who love each other like a modern David and Jonathan to such extremities. Maxwell does this with penetrating insight and emotional integrity.

The structure is intriguing: the narrator, who was about ten when the murder happened, is a man looking back on these events fifty years later. He lived in the same small town as these farmers, and was a schoolmate of the murderer’s son. Both boys have seen the happiness of their young lives destroyed: the narrator, by the death of his mother in the 1918 flu epidemic, which also killed his brother, and caused his already emotionally distant father to become even colder towards him; Cletus Smith, the other boy, whose parents divorce as a result of the wife’s adultery. After the murder, worse follows.

They find consolation in each other, these boys. The narrator is a sensitive, unsporty bookworm, bullied at school, compounding his sadness at home. The two boys are drawn to play together, unconsciously forming another close bond of friendship like that of the two farmers, and at the end of each day’s mutually consoling company, say the farewells that give this book its title. A few years later, the narrator treats his friend badly, in a way that causes him to feel piercing guilt for the rest of his life. 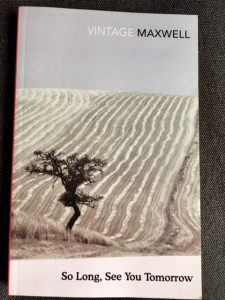 It’s an unusual genre – based on fact, with real place names and details that featured in Maxwell’s own life. The psychological development of the innocent narrator’s young self is what grips the attention, how he tries to make sense of what was so violently broken through no fault of his own (and the same applies for Cletus); strangely, the melodrama of the adultery, murder and suicide among the grown-ups forms the backdrop, the catalyst to the two boys’ descent into despair. A passing reference to a remark by Ortega y Gasset sums up this aspect of the novel: life is, the narrator recalls the philosopher remarking, ‘in itself and forever shipwreck’.

The lives of the women in this drama are also brilliantly and economically evoked. Even before the events that wreck all their lives, Clarence Smith, Cletus’ father, sees his wife as the woman who, ‘in the sight of God,’ owes him

love, honor and obedience. Other people, with nothing at stake, see that there is a look of sadness about her, as if she lives too much in the past or perhaps expects more of life than is reasonable.

There, obliquely and suggestively, is what explains the whole biblical-Shakespearean tragedy of this story, and its emotionally stifling rural social and cultural setting. She’s a prairie Emma Bovary.

It’s hard to find anything else brief enough to quote that might convey the Maxwell voice that makes of this material such an original and compelling narrative – it’s a slow-burning, low-voltage style with few literary embellishments or stand-out passages of ‘fine writing’. The effect is cumulative, unnoticed as you go along, like breathing.

There’s a section I’d marked in ch. 5 where there’s a description of a carriage drive in the countryside when the narrator was an even smaller boy; the landscape, says the narrator, is much the same once the town limits are passed:

Plowed fields or pasture, all the way to the horizon. There were trees for the cattle to stand under in the heat of the day, and the fields were separated from each other by Osage-orange hedgerows that were full of nesting birds.

The conversation in the front seat of the carriage was about what was growing on both sides of the road: corn, wheat, rye, oats, alfalfa. The women, blind to this green wealth, talked about sewing and ‘receipts’ – the word they used for recipes. I was of an age to appreciate anything that looked like something it wasn’t, and when we passed a cluster of mailboxes I would turn and look back. Long-legged wading birds is what they put me in mind of…

It’s the prose equivalent of a Japanese watercolour: much more is intimated at than is overtly represented. Metaphor, it’s implied, is for the immature mind.

A few pages later the narrator explains what he’s about. As he no longer knows where his boyhood friend Cletus is, the only possibility of ‘making some connection with him’ is through ‘trying to reconstruct the testimony he was never called upon to give.’

If any part of the following mixture of truth and fiction strikes the reader as unconvincing, he has my permission to disregard it. I would be content to stick to the facts if there were any.

I found it impossible to disregard what follows. The attempt to rediscover the doomed innocence of those boys (and adults) is reminiscent of Le Grand Meaulnes, with some of the elegiac quality (without the baroque style) of Proust.

There’s a heartbreaking account of Cletus’ loyal, loving dog and her sad fate – another vividly realised, unsentimentally portrayed aspect of this family drama. Some good cats, too, sitting in the cow barn in a row, waiting ‘with their mouths wide open for somebody to squirt milk down their throats.’