Mrs TD and I went to Bristol on Saturday to help family celebrate our granddaughter’s ninth birthday. She likes unicorns and Littlest Petshop. 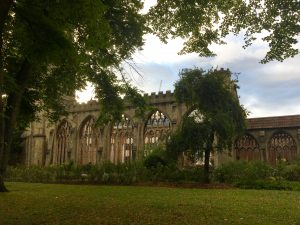 We discovered across the road from our city centre hotel a lovely green space called Temple Gardens – I wondered why it had that name. At the far end was a ruined church – bare ruined choirs. Walls and ends more or less intact, in what looks like Perpendicular style, but roof gone.

According to the plaque outside, this church was built in the 15C on the site of a round church built by the Knights Templar in the 12C, taken over by the Knights Hospitaller in the early 14C. So that accounts for the name of the gardens – and existing church ruin. 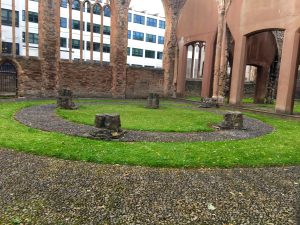 When I peered through the locked iron gate that barred entry to the building, I could see the stone foundations of the pillars that would have supported the original circular nave, right in the centre of the later medieval one.

The Luftwaffe had destroyed the church during the Bristol blitz of 1940 (which also took out much of the city centre, now replaced by 1960s brutalism and subsequent temples to consumerism). When the rubble of the church was being cleared these ancient circular foundations were revealed – a happy outcome for what seemed a disaster. Wikipedia has a different story, saying it was excavated in 1960. 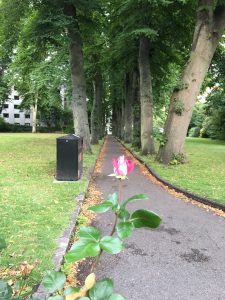 View from outside the church towards the hotel. Shame about the litter bin

The later church has at its west end a leaning tower, apparently built out of true perpendicular from the outset – probably because of subsidence in the clay on which it was built.

The gardens are serene and lovely, right in the bustling city centre.

I’d been an undergraduate in Bristol many years ago, and never knew this place existed. I said as much to Mrs TD; two ladies nearby turned to me, and one of them said she’d lived in Bristol 20 years and didn’t know it was here! 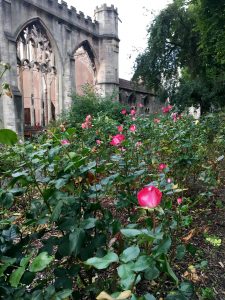 Maybe more on this trip next time. 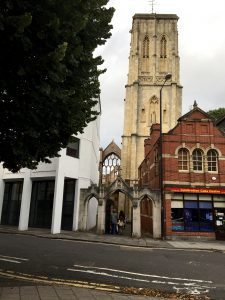 19C archway and the west tower, seen from the main road outside the gardens. Garbled mix of more modern architecture jostles garishly beside it, incongruously mundane