On July 14, 2016 I wrote this post about my visit to Plymouth in memory of my oldest friend, Mike Flay, who’d died earlier that year. As I wrote then, we used to meet there often, usually ending up at the same couple of watering holes as we talked endlessly about books, football, family.

Yesterday I repeated the pilgrimage. So in a departure from my usual bookish posts, here’s a photographic record of my day there. A commemorative dérive…

I always relish the word ‘wharf’, which derives either from OE hwearf: bank, shore, or from Old Dutch. Typical of the English language, it can be spelt ‘wharfs’ or ‘wharves’ in the plural. Like hoofs. But not rooves. 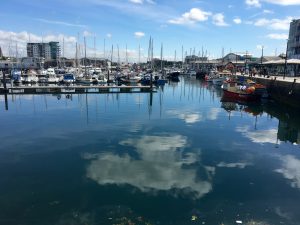 We didn’t often wander to this old part of town, but I thought I’d approach our usual lunchtime haunt from the Barbican.

My first stop was the old bookshop by the marina. Over three floors are spread thousands of second-hand books. The fiction section seemed to follow a loose sort of plan – orange Penguins, green ones, hardbacks – but there was little discernible use of alphabetical order. 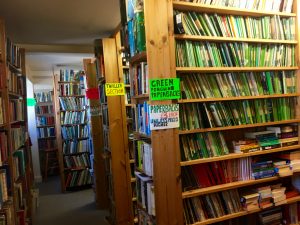 I resisted the temptation to buy anything.

The Scots proprietor told me he had far more stock in his warehouse. 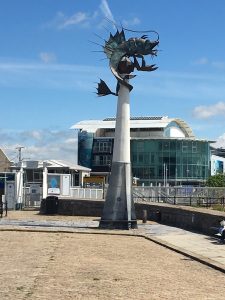 This strange creature stands on the Barbican marina 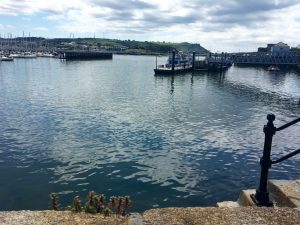 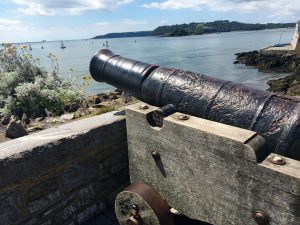 This is one of two cannon that loom over the bay from the hilltop by the Hoe. Plymouth is still very much a maritime town. 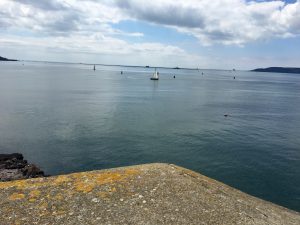 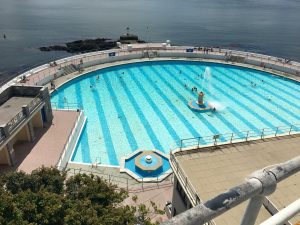 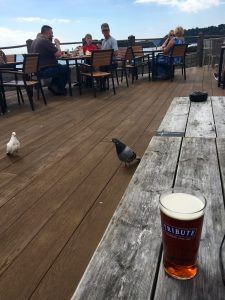 This is the terrace of the Waterfront bar where Mike and I usually had lunch. He always had a burger.

It was warm enough yesterday to sit outside. Pigeons and gulls tried to persuade diners to part with some food.

That’s not St Austell brewery Tribute in the glass: it’s a Dartmoor brew called, appropriately, Jail Ale. Not bad at all.

Right on cue, as last year, the Brittany Ferries ship Armorique steamed by, just a few metres from the terrace. 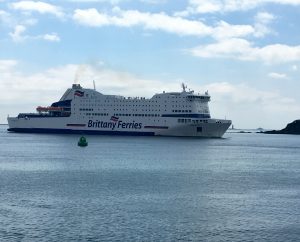 As I headed back towards the town centre I passed this game of bowls in progress. Not exactly Francis Drake… 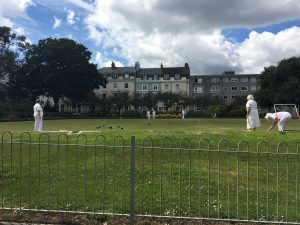 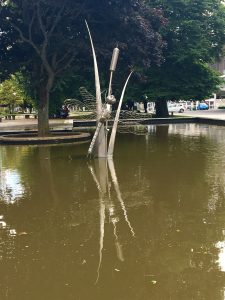 Dragonfly sculpture in a rather murky pond by the town centre 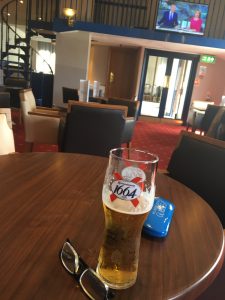 I made one final stop, before taking the train back to Cornwall, in the place Mike always called the Colonial Hotel – not its real name. It’s a bleak sort of place, but strangely conducive to conversation, we always found – perhaps because there’s nothing much else to engage the attention.

Rather a sad trip home, but the day was good.