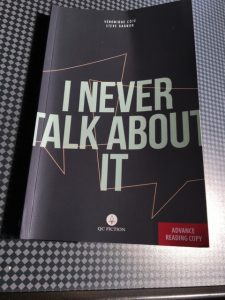 Most books of translated fiction foreground (not surprisingly) the original author; the translator – if they’re even mentioned – will get a tiny credit somewhere near the front, probably not on the front cover.

Quebec-based QC Fiction, an imprint of Baraka Books based in Montreal, was set up last year to do things differently, to publish exciting new Québecois voices with translations that are as original and vibrant as the source texts.

I Never Talk About It, published 1 September, is even more daring and innovative than QC’s usual output: 37 stories written by actor-authors Véronique Côté and Steve Gagnon are presented with no attribution – we can’t tell for sure which author (maybe both?) wrote which story (it’d be easier in French, I suppose, because of the use of gendered nouns, etc.) OK, some stories are clearly narrated by a woman or man, but that doesn’t necessarily signify the gender of the author.

Here it’s the translators who take a more central position. This is what QC say about the project on their website:

This project aims to show there are all kinds of ways to bring across an author’s voice in translation… at least 37 of them! Translators include literary translation students, first-time and up-and-coming literary translators, world-renowned translators who have won major international prizes, some of Montreal’s best writers and translators, a retired high-school French teacher in Ireland, and francophone authors translating into their second language. There are even people in there who (armed only with a dictionary and the priceless ability to write a beautiful sentence) barely speak French.

As Peter McCambridge, fiction editor of the imprint, says in his Introduction, ‘readers want to read faithful translations, don’t they?’ His question raises some familiar if important points about translated literature. What if readers want something more, something like ‘a different sort of artistic creation’? This volume doesn’t exactly provide answers to that question, but it does offer some textual examples (stories) and commentaries on them to provide some implicit suggestions.

So: ‘let’s start a conversation’, he suggests. ‘Let’s talk about the types of translators and translations you’ll come across in this book.’ The anthology’s title is taken from the opening line of the first story, ‘Olives’, translated by Tony Malone (and found again, in the past tense, in ‘Wrestling’, and with other variations in other stories). And talking – or not talking – is a central theme in many of the stories in the collection, another indication, surely, of their origins in oral-theatrical performance.

Every story is only a few pages long, more Flash Fiction than ‘short story’ – and it’s apparent that each translation is a sequence of personal interpretations and decisions, linguistic leaps, deviations or distortions, however well intentioned. How much of their own personality or ‘reading’ of the story is apparent, and how does that affect our own reading of the text?

Each story is translated by a different person, each with their ‘own unique approach.’ Their identity is only revealed after each story, so as not to influence the reader’s experience beforehand; they were invited to apply a single adverb to describe that approach, and to give a brief account to reveal how and why they completed their task.

The stories’ origin as spoken texts – monologues, in fact – is an important factor. The two writers produced their scripts, which were then performed in various locations across Quebec, and the audience followed the performers as they moved across the city. The stories therefore read differently from the usual literary type, and as readers we can’t reproduce the exact experience of the original audience, watching the actor in a particular urban setting .

The translators frequently refer to their attentiveness to ‘voice’, ‘register’, ‘tone’, ‘rhythm’, ‘pace’. They comment on the intimate or ‘confessional’ nature of the narrative voice, of following the ‘spirit’ not the ‘letter’, striving for a ‘fluid’ style, not ‘forced’. Many refer to the difficulties of rendering the original punctuation, which tends to be looser in French – especially in colloquial texts created to be orally delivered, many of them in stream-of-consciousness mode, which doesn’t lend itself easily to conventional written orthographical and syntactic conventions.

Comma splices, run-on sentences: these posed problems for the translators that wouldn’t have been so apparent to the original audiences, listening to the words spoken in the streets of the city. Every punctuation mark in a written text is a function of a different mode and level of discourse from spoken texts. Is there such a thing as a semi-colon in spontaneous speech?

Some translations are, as one might expect, more successful than others when coping with these matters.

Of course it’s a matter of personal taste how you judge this. I found the stories with typographical quirks – text laid out like poems, say – more distracting than exciting. A bit too overtly “edgy”.

I’d like to say more about the content of the stories and the nature of these translations in more detail next time; I find that I’ve gone on too long already. Note the high-register use of the semi-colon there.

Links to my posts on other QC Fiction texts:

Listening for Jupiter, by Pierre-Luc Landry

2 thoughts on “Do we use semi-colons when we speak? I Never Talk About It: pt 1”