This ‘oneiric masterpiece’, as David Mitchell aptly calls it in the Introduction, establishes an eerie, dreamlike atmosphere from the start. First we get a tonally flat forensic report on the disappearance of an unnamed man. His fellow teachers and partner assume he’s killed himself. As no trace of him is found after seven years, he’s pronounced dead. 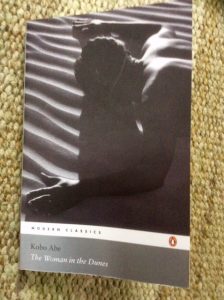 The next chapter begins his story in flashback from the moment he arrived in a coastal village, on holiday to search for an as yet unknown beetle to add to his entomological collection. From the outset it’s apparent that this is not a conventional, realist narrative. First there’s the bland acceptance of those he left behind that he was clearly Oedipal in his insect-collecting, and therefore (an odd logical leap) suicidal – a clear indication of his ‘weariness with the world.’

Then when he arrives at the village the behaviour of people he encounters is like those frightened townsfolk in western movies where the drifting stranger enters a town that is being terrorised by psychotic bandits or a deranged bullying sheriff, and they hope – or fear – that he’ll be the latest would-be hero to take them on – and fail.

The topography of the village is also bizarre: the houses ‘seemed to be sunk into hollows scooped in the sand. The surface of the sand stood higher than the rooftops.’ When he reaches the expanse of dunes by the sea and looks back,

he could see that the great holes, which grew deeper as they approached the crest of the ridge, extended in several ranks toward the center. The village, resembling the cross-section of a beehive, lay sprawled over the dunes. Either way, it was a disturbing and unsettling landscape.

From that point it comes as no surprise that he’s lured into a terrifying trap, with a young, attractive widow the bait. At first he struggles with all his strength and ingenuity to escape, then his will to liberate himself fades.

Like the landscape he’s ensnared in, the narrative is disturbing and unsettling. The lack of clear signs explaining why this is being done to him adds to that nightmare aura. He becomes a victim, struggling to extricate himself like one of his insect specimens on a pin, or a fly in a web. The imagery from the field of insects (and to a lesser extent, birds and animals) provides further layers of ‘unheimlich’ atmosphere.

The widow, who remains unnamed throughout, and the man, whose identity is finally revealed as Niki Jumpei, are present in every scene. The ghastly villagers, who act as the man’s guards and tormentors, play a peripheral but still terrifying role.

So what’s it all about? David Mitchell provides a plausible interpretation:

The woman is the animate; the mortal; the flesh; the impetus of sex; consolation in the cell of the unendurable. The dunes – the sand – is the inanimate; the eternal; what flesh is fated to fight against; what confines us; the unendurable self.

This sounds a lot like Sartre’s notoriously provocative account of slime – ‘le visqueux’ – and holes in Being and Nothingness. The novel relates constantly how the man and woman perspire or excrete moisture (from their eyes especially, but also from more suggestive orifices) to which the sand irritatingly, abrasively adheres. Even when they have sex there’s an uncomfortable focus on the intrusiveness of the sand. Sartre equates the slimy with the feminine (especially in a sexual way); the vulva is another void or hole that gapes open, evoking horror in the male. Slime is stagnation; like holes, it appeals to Being, is base and repugnant.

Not surprising that feminist critics (until recently, anyway) have found this account misogynistic and repugnant in itself.

I’m not sure this is what Abe is about in the novel. As Mitchell suggests, interpretation rests ultimately with each reader. There’s no pat answer. The fact that the man falls into a sand-trap, a deep hole at the bottom of which lives the woman, seems to support some kind of gender polarity and conflict or tension. There’s a paradoxical repulsion in the man from the woman and all she represents and inhabits, and simultaneous attraction. Is the sex impulse, that is, an impulse towards self-annhilation?

Not really. It also seems likely that this is an existential parable of a Kafkaesque kind. Like Joseph K, the man’s entrapment and struggle to break free could represent the human condition: that everywhere we are enslaved by everyday life, and are doomed to fail in our quest for liberty. It’s also notable that he’s made painfully aware of the futility of his existence with ‘the other woman’ in the world outside the dunes by his more overtly painful futile toil with the sand with the woman in the dunes; at least the trap in the sand is what it looks like – futile, meaningless, ineffable.

There’s Camus, too: his The Myth of Sisyphus seems apposite, given that the man and woman are sentenced to filling cans of sand that are taken away by the villagers in order to stop the relentless, inexorable shifting sands from engulfing their hut, but also the whole village. Each night they clear the sand away, and next day it’s all been replaced and they must start again.

In the Greek myth Sisyphus is forced, as punishment for his crime against the gods, to roll a rock up a hill; at the top, it rolls back down again and he must repeat the task for ever. For Camus this represents man’s doomed search for meaning or clarity in the face of an unintelligible world in which there is no God, eternal truth – or meaning. Life is absurd: ‘The struggle itself…is enough to fill a man’s heart. One must imagine Sisyphus happy.’

The man in Abe’s disconcerting parable may achieve by the end a similar kind of resigned acceptance of the hopelessness of his fate.

This may all sound too cerebral and abstract to appeal; but it’s a compelling read, full of tension and narrative drive – more Stephen King in its relentless, frightening drive than Sartrean intellectual obfuscation.

It’s an existential fiction – acknowledging the futility, absurdity or unreadability of life – that was also being explored by Beckett, Borges and others in the mid-20C.

It may not be to everyone’s taste, but it’s profound, truly terrifying and strangely uplifting.

Here’s a final quotation that maybe indicates the kind of thing I’ve been trying to suggest; it’s when the man has rebelled against his captivity and refused to co-operate with the sand-digging:

When he actually began working, for some reason he did not resist as much as he thought he would. What could be the cause of this change? he wondered…Work seemed something fundamental for man, something which enabled him to endure the aimless flight of time.

‘For some reason’; ‘seemed’; this view of life’s narrative is that it’s elusive and defies attempts to interpret it. Soon after this scene he tells the woman a Kafkaesque parable of a guard who protected an ‘imaginary castle’, ‘an illusion.’ He then brushes sand from his head, looks at the wind-driven ripples of sand at his feet [ellipses in the original]:

Supposing they were sound waves, what kind of music would they give? he wondered. Maybe even a human being could sing such a song…if tongs were driven into his nose and slimy blood stopped up his ears.,,if his teeth were broken one by one with hammer blows, and splinters jammed into his urethra…if a vulva were cut away and sewn into his eyelids. It might resemble cruelty, and then again it might be a little different. Suddenly his eyes soared upward like a bird, and he felt as if he were looking down on himself. Certainly he must be the strangest of all…he who was musing on the strangeness of things here.

19 thoughts on “The aimless flight of time: Kobo Abe, The Woman in the Dunes”