I came close to disliking Frank, and therefore this novel in which he’s the selfish and biased first-person narrator. His dashingly handsome but clueless ex-sailor lover, Johnny, jailed for a year for his inefficient housebreaking, is as careless and dilatory with his correspondence as are his family with their conveying of messages between Frank and Johnny. His snobbery towards these ‘ordinary’ (read working-class) people becomes irksome: he confides in us his derision at their unhygienic lifestyle and inarticulate ways of talking and writing letters, especially their clichéd catchphrase that gives the novel its title. He’s like the pompously irascible and perpetually grumpy hack writer Ed Reardon in the Radio 4 comedy, and like him expects us, his readers – presumably he thinks we’re of the same literate, educated class as himself – to share his patronising disdain for such people. 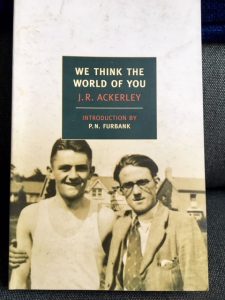 But that’s not his only trait. He seems genuinely fond of Johnny’s good-hearted mother, Millie. They have a real ‘bond’, he feels – though it isn’t often evident in their scenes together, and is largely due to the unaccountable devotion to the feckless Johnny that Frank also feels.

His scorn is aimed largely at Millie’s idle, brutal fourth husband, Tom, and at Johnny’s slatternly, fertile wife Megan. Why does he so hate them? It’s clear to us, though not at first to Frank, that he’s as jealous of them because of their close relationship with Johnny as they are of him.

Frank is a professional man with a flat in the smart London area of Barnes; he has a river view, so he’s clearly well off. In fact he frequently lavishes his money on these people he so despises in a misguided attempt to buy the favours with Johnny that he so longs for. And that’s his problem: he doesn’t understand how contemptible this makes him in their eyes – and in those of his readers. He sometimes glimpses this harsh reality – that he uses money to help ‘bind’ Johnny to him: ‘Happiness had to be paid for.’ When Johnny is released and visits him, bringing with him his beautiful German shepherd bitch Evie, Frank watches from his balcony, willing him to look up expectantly –

…but he did not look up, and I recollected then that he never looked back at parting either; it was as though I existed for him only at the point of contact.

But Evie remembers the place Frank had shown her a taste of freedom and love; ‘She remembers.’

What redeems the novel is the love he learns to feel for Evie (the name is as symbolic as her role in the novel), whose unhappiness at being cooped up in the back yard of Millie and Tom’s grim house while Johnny is incarcerated touches his otherwise cold heart. He comes to acknowledge that by paying to help keep Johnny and his family, he’s shamelessly exploiting their poverty and powerlessness. He also comes to realise that his cash handouts are purely self-serving.

Frank finally sees, after that long-desired first prison visit with Johnny, that

Say what one might against these people, their foolish frames could not bear the weight of iniquity I had piled upon them; they were, in fact, perfectly ordinary people behaving in a perfectly ordinary way, and practically all the information about themselves and each other had been true, had been real, and not romance, or prevarication, or the senseless antics of some incomprehensible insect, which were the alternating lights in which, since it had not happened to suit me, I had preferred to regard it…Their problems…had been real problems, and the worlds they so frequently said they thought of each other apparently seemed less flimsy to them than they had appeared to me when I tried to sweep them all away. It was difficult to escape the conclusion, indeed, that, on the whole, I had been a tiresome and troublesome fellow who, for one reason or another, had acted in a manner so intemperate that he might truly be said to have lost his head…

The fastidious syntax and vocabulary of this extract is telling, for this apparently contrite, confession continues:

…but if this sober reflection had upon me any effect at all, it produced no feeling that could remotely be called repentance, but only a kind of listlessness as though some prop that had supported me hitherto had been withdrawn.

Not quite an epiphany after all, then. But when he explores Johnny’s true nature for the first time:

Beneath such a general smear of mild good nature, I asked myself, could any true values survive? Where everything mattered nothing mattered, and I recollected that it had passed through my mind while I spoke to him that if the eyes that looked into mine took me in at all, they seemed to take me for granted.

Even at this moment of apparent revelation there’s a powerful undercurrent of self-pity.

It’s the scenes with Evie that for me prevent the novel from becoming a tedious fictional autobiography of a selfish curmudgeon. I don’t see much of the ‘wonderfully funny’ or ‘hilarious’ moments that some reviewers perceived, but there’s a refreshing warmth in Frank’s evident love for this pretty dog, whose own jealousy ends up more destructive  than Johnny’s or his family’s. Here’s a typical scene: Frank has finally managed to spring Evie from the prison conditions in which Millie and Tom keep her in their stuffy, confined East End house, and has taken her out for her first ever extended free run outdoors (this was the visit Evie remembered in the extract above):

The daylight hours we spent mostly in the open air. Evie saw to that. And it was borne in upon me that, without perceiving it, I had grown old and dull, I had forgotten that life itself was an adventure. She corrected this. She held the key to what I had lost, the secret of delight.

The plainness of the language now has none of that mandarin fussiness noted in Frank’s near-revelation above. Here the lucidity and openness of the style indicates that this is Frank’s true epiphany, and it’s Evie who brings it about in a way no human is capable of:

[Delight] was a word I often used, but what did I know of the quality itself, I thought, as I watched her inextinguishable high spirits, her insatiable appetite, not for food, in which she seemed scarcely interested, but for fun, the way she welcomed life like a lover?…She was childish, she was charming, and to me it seemed both strange and touching that anyone should find the world so wonderful.

The many passages like this make the novel ultimately life-affirming.

4 thoughts on “The secret of delight. J.R. Ackerley, We Think the World of You”