This was Nicole Krauss’s debut; as such it’s impressively confident and accomplished – if a little over-dependant on its high-concept central plot feature. Samson Greene, an English professor in his thirties at Columbia University, New York, is found one day wandering dazed and confused in the Nevada desert. A brain tumour has impaired his cognitive functions. It’s successfully removed, but he’s left with no memory after the age of twelve. What happened in the ensuing twenty-four years is a blank.

The narrative focuses on how this impacts upon his sense of self, his identity. In particular, he finds himself married to a beautiful woman, Anna, but with no emotional or historical connection with her. He’s devastated by the frequent ‘discoveries’ about his past, such as the death of his mother five years earlier.

He finds some kind of companionship and solace with a freewheeling student of his, who’s so laid-back she simply accepts that he has no recollection of who she is. A romantic liaison seems imminent, but comes to nothing.

Then the plot veers off into speculative territory that seriously threatens the credibility of the already so-so plot. Out of the blue Samson receives a call from a scientist who wants him to participate in what turns out to be a highly dodgy project in a sinister desert facility involving memory: how to capture people’s memories from a sort of brain photocopier and transfer them into someone else. As Samson’s brain is more or less a tabula rasa, he’s the ideal guinea-pig as a memory-receiver.

Not surprisingly all doesn’t go well. His fellow volunteer at the facility, a man who becomes his friend, has a memory captured and transferred to Samson’s brain that is so traumatic he freaks out and sets off on a quixotic quest – effectively to in some way find himself and tie up the loose ends of his past – those few that he can remember from his childhood, and the rest that he’d been told about. 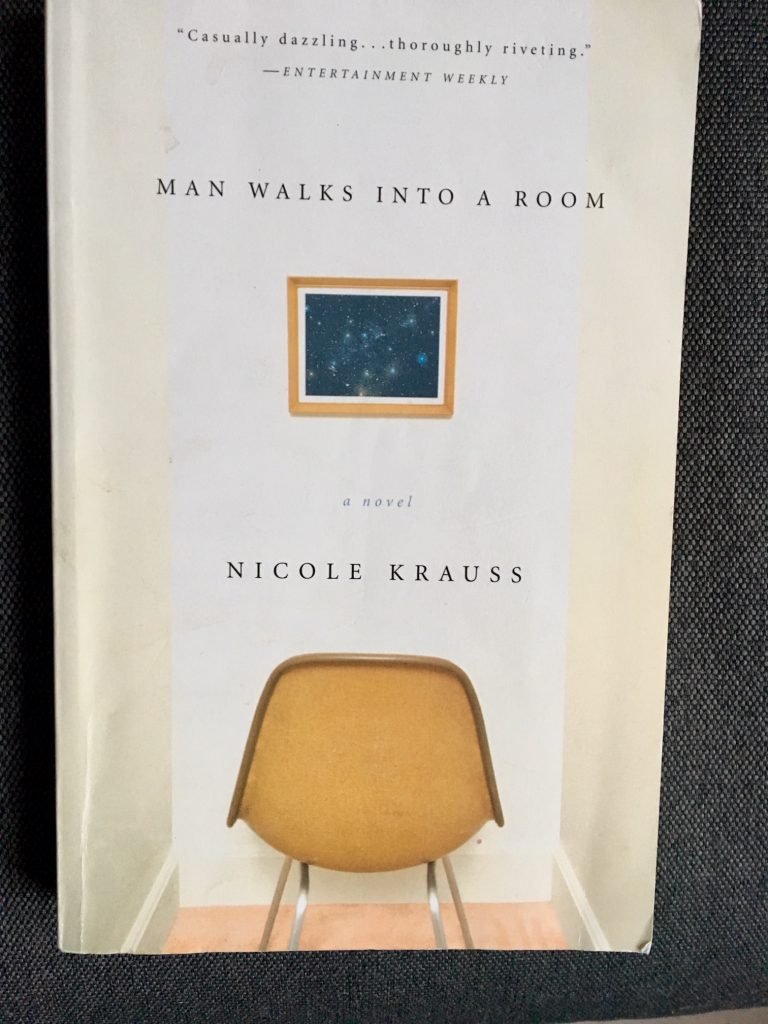 It was a good read while I was recovering from illness in bed. Any other time I’d have probably not finished it, for the reasons I think I’ve hinted at above. I’ve maybe been a little over-critical; Krauss writes well, and when she’s inside Samson’s damaged consciousness has some interesting ways of exploring how his brain trauma manifests itself in terms of his behaviour, feelings and fractured, fragmented relationships.

There’s a good portrayal of his dog, Frank, too, who sadly drops out of the story when it lurches off into sub-sci fi territory. Frank accepts Samson for how he is, memory or not, for dogs don’t really care about memory. Here’s a typical canine aside, after Samson has been reaching out to his student friend on the phone, but failing to connect with her:

In the far corner of the room the dog moved his feet in his sleep, as if he were treading water.

There’s a touching moment when Samson is trying to explain to Anna what it’s like to be him with his adult memory gone: “Like an astronaut”, he says. They agree he should move out. He’s packed and about to leave:

“Isn’t there something else?” she asked, the dog crouched between them like a small country…[He says No, then catches sight of a camera on a shelf] Anna took it down and handed it to him. “Take it.” He lifted it to his eye and found her through the lens. She stood patiently, like someone whose face is being felt by the blind, but when he pressed the shutter she flinched. “To remember me by,” she said, and smiled grimly. The dog rolled over as if he were dead.

The first half of this novel has some good images and poised writing of that kind. It lost its way, in my view, when it rode off into the desert on a horse with no name.

7 thoughts on “Nicole Krauss, Man Walks Into a Room”