On the whole, more men had perhaps escaped into the war than from it.

So says Captain Anton Hofmiller at a dinner party in Vienna in 1937, as the rise of fascism threatens the world. He’s siding with the unnamed frame narrator of Stefan Zweig’s only full-length novel, Beware of Pity, in predicting the inevitability of a second world war towards which hundreds of thousands of unwitting fools will rush headlong without knowing why, ‘perhaps merely out of a desire to run away from themselves or from disagreeable circumstances.’ As the main narrative shows, those words describe his own unflattering experience and motives.

Hofmiller had been decorated at the age of 28 with Austria’s ‘almost legendary’ highest award for outstanding bravery in action during WWI. When he and the narrator sit together to talk, the reluctant ‘hero’ explains why he’d earlier shown disdain when gaped at in a café, and what it was he’d been running away from. Far from being a brave hero, he explains he simply showed courage for perhaps twenty minutes, being one of those ‘who were running away from their responsibilities rather than patriotic heroes’, trying to ‘extricate themselves’ from ‘a desperate situation.’

So he begins to relate his ‘very odd story’, the ‘tortuous paths’ along which he travelled to attain the dubious status of ‘hero’. 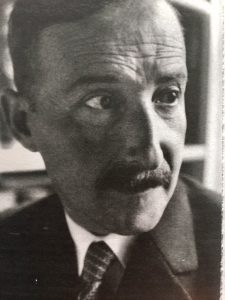 Zweig is best known for his short stories and novellas, and it’s possible to see this novel as in part a coherent collection of related short narratives. There’s the central story of the humiliating social gaffe that leads to Hofmiller’s misguidedly befriending the crippled Edith Kekesfalva and the terrible consequences of his indulging the frequent waves of ‘that painful, exhausting yet wildly exciting gush of pity’ that ‘overwhelmed’ him whenever he looked on the ‘hypersensitive’ young woman’s disabled condition (it seems to be polio, but is never named as more than ‘a bacillus’). She frequently warns him not to visit her out of pity alone, not to ‘sacrifice’ his time and finer feelings on her behalf – but as always he fails to heed the advice of those who know better, and spirals down into an emotional and moral impasse compounded by his lies, deceptions and misconceptions of what’s happening and what motivates his and others’ behaviour.

There are embedded in this story several others. There’s one that tells how Edith’s father rises from an impoverished childhood with the name Leopold Kanitz, brought up in a Jewish family, to become (not very honourably), with a newly acquired ‘Magyarized’ name ‘decked out with a prefix of nobility’, the fabulously wealthy magnate  with a castle home in the small garrison town at which Hofmiller, a 25-year-old second lieutenant cavalryman or Uhlan, is stationed, and where he first encounters the girl who is to become his nemesis, and ‘an emotional abyss’ opens up before him. He tries several cowardly modes of escape, ultimately finding it in action in WWI.

There’s another which tells how Doctor Condor, who is one of a series of eminent clinicians trying (futilely) to effect a cure for the stricken girl, came to marry a blind former patient. When he first hears of this, Hofmiller makes another of many misjudgements in the narrative: he erroneously assumes that the doctor was motivated, as he was with Edith, by pity, not love. When the naïve young officer finally gets to know Frau Condor, he undergoes one of several beautifully portrayed, painful epiphanies, each of which serves to  make him more mature and see things less obscurely, less selfishly and myopically.

The novel is 361 pages long, but it never flags. Even though the outcome is never in much doubt, one is drawn into the experiences of this generous-spirited but ingenuous, socially awkward, confused young man. Every effort Anton makes to be noble and honourable ends with his becoming more enmired and embarrassed. He slowly learns a painful lesson about the ‘two kinds of pity’ –

Unknown and unsuspected tender zones of feeling – but also it must be admitted very dangerous ones!

This story of the dangerous allure of the wrong kind of pity and its addictive appeal has some similarities to the Transylvanian Trilogy by Miklós Bánffy, about which I wrote recently, in that it is set in the twilight years of the Austro-Hungarian empire before it was caught up in the catastrophe and carnage of WWI, and deals with the outmoded, corrosive codes of honour that beset the aristocratic and officer classes of society at that time. 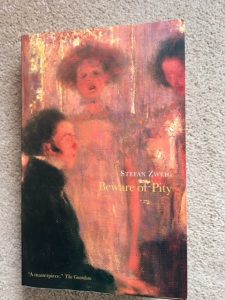 It’s a gripping narrative that churns the stomach at times as the central characters undergo excruciating experiences and humiliations. The translation is unobtrusive and fluent. And what a handsome cover, taken from Gustave Klimkt’s painting ‘Schubert at the piano’.

See the perceptive piece on this novel by Nicholas Lezard in the Guardian in 2011, which provides useful biographical and historical-political context. The article includes a photo of the main actors of the film version of 1946 (including Lilli Palmer as Edith) and its prolific British director (Maurice Elvey)  – which received such a critical mauling it almost ended his career prematurely.