Henry Lyulph Holland, first Earl of Slane, had existed for so long that the public had begun to regard him as immortal. The public, as a whole, finds reassurance in longevity, and, after the necessary interlude of reaction, is disposed to recognise extreme old age as a sign of excellence. 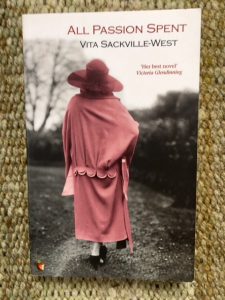 So begins, eloquently and wittily, Vita (short for Victoria) Sackville-West’s ninth novel. Lord Slane had led a life of eminence as politician (rising to Prime Minister, then in later years he sat – when it suited him – in the House of Lords) and diplomat (ultimately as Viceroy of India). When he dies aged 94 his six children and ‘their two wives and a husband bringing the number up to nine’, a ‘sufficiently formidable family gathering’ – all in their sixties – gather like ‘old black ravens’ – or vultures – to determine the fate of his widow, their mother, Lady Slane, who is 88.

There’s a sort of inverted or subverted King Lear plot; led by the domineering Herbert, the eldest, they assume that she will spend a portion of the year in each of their houses in turn; they will ‘divide mother between them’. Each of them has their own venal, selfish motives for such an arrangement. She must, they assume, ‘be allowed to break down, and then, after that was over, be stowed away,’ or ‘cleared up’, like her late husband’s desk. They privately believe their mother ‘was rather a simpleton’ with ‘no grasp on the world as it was’, therefore malleable:

Mother had no will of her own; all her life long, gracious and gentle, she had been wholly submissive – an appendage. It was assumed that she had not brain enough to be self-assertive…That she might have ideas which she kept to herself never entered into their estimate…She would be grateful to them for arranging her few remaining years.

This patronising assessment (shared by most who know or knew her) is proved inaccurate; for Lady Slane, who ‘had spent a great deal of her life listening, without making much comment’, and who ‘all her life had been accustomed to have her comings and goings and stayings arranged for her’, obediently doing what was expected of her as the trophy wife of a public male figure, amazes the vulture offspring by announcing that she has no intention of complying with their decision: she is to rent a house for herself and her equally elderly French maid Genoux in Hampstead where she will live alone. Visitors will be banned, except for her children; anyone younger she deems too trying.

They assume she ‘must be mad.’ This stereotypically passive, submissive woman, always ‘reserved in speech, withholding her opinion’, never revealing what she was thinking, had clearly fooled them all along. This was a mask she wore involuntarily. Now she is free.

Only Edith, the unmarried youngest child, ‘always flustered’ and inclined to say the wrong thing, and who the rest of the family dismiss as scatterbrained and ‘a half-wit’ (pretty much like her mother, then), has any emotional intelligence, is ‘surprisingly shrewd’, and perceives her mother’s true nature, just as she sees through the hypocrisy, greed and bullying of her siblings – except for her equally unprepossessing brother Kay, a bachelor whose collection of compasses and astrolabes was all that interested him and kept him happy.

What follows is a revealing portrait of a woman asserting her right to be herself – Vita habitually denied she was a feminist, but a believer in human rights. As a member of the bohemian, ostensibly free-thinking Bloomsbury set, and Virginia Woolf’s lover (along with Violet Trefusis and others), Vita was intent on showing how society oppressed and constrained women and their individuality, and how the institution of marriage precluded most women from expressing their true selves. Lady Slane had longed to be an artist, but marriage to Henry meant that she never once painted. She had a role to play as his decorative ‘appendage’, his obedient wife – this is the only life for which women like her were ‘formed, dressed, bedizened, educated…safeguarded, kept in the dark, hinted at, segregated, repressed, all that at a given moment they may be delivered, or may deliver their daughters over, to Minister to a Man’.

Victoria Glendinning, in an astute and intelligent Introduction, considers the weaknesses in this portrayal. Why make Lady Slane so intellectually dim, so feminine? Her argument is compelling.

The newly liberated old woman’s life in Hampstead is amusingly told, with some engagingly eccentric characters – including a long-forgotten old flame who turns up unexpectedly, reminding her of what she once glimpsed but foreswore in her radiant, unquestioning youth – and some lively, sparkling prose. It’s hard to believe that home-educated Vita saw herself, like Lady Slane, as a rather stupid and limited writer beside the glittering Virginia Woolf.

Take this, for example: Lady Slane’s landlord, the delightfully strange Mr Bucktrout, has taken a liking to her – he’s refused to rent out his house for decades, but recognises in her a kindred spirit; he’s even taken to giving her little presents, and is one of the few people she’ll allow to visit. She thinks of his small, thoughtful gestures of attentiveness, comparing them favourably with the empty manners of polite society:

Courtesy ceased to be blankly artificial, when prompted by real esteem; it became, simply, one of the decent, veiling graces; a formula by which a profounder feeling might be conveyed.

She remembers a flock of yellow and white butterflies that once accompanied her and her husband as they crossed the Persian desert together, in a passage too long to quote here, but which is a beautiful, fragile image of the life she glimpsed but was unable to enter into. As the man says who once locked eyes and souls with her in India, and then left her life:

Face it, Lady Slane. Your children, your husband, your splendour, were nothing but obstacles that kept you from yourself. They were what you chose to substitute for your real vocation. You were too young, I suppose, to know any better, but when you chose that life you sinned against the light.

Men do kill women, he concludes. Henry had ‘cheated her of her chosen life’, she reflects on another occasion, but had offered her another, an ‘ample life’, but one ‘pressed up close against her own nursery’. He’d substituted his life and interests, or their children’s, for her own. ‘It had never occurred to him that she might prefer simply to be herself.’

Vita can write (ok, maybe not sustained over every page), and needn’t have felt inadequate when compared with the better fiction of her famous lover; I’d have liked to quote more examples to support my case, and realise I’ve focused here on the novel’s themes and moral, rather than on the style. I’d be interested to know if I’m alone in admiring it – despite its unevenness. She is indeed a lesser talent, less serious, ambitious and experimental, less important in the annals of literature, perhaps, than the author of Orlando, whose protagonist is based on Vita; but there’s some fine writing in this heartfelt novel, even though it flags about halfway through.