FR Leavis says of Anna Karenina, quoting Matthew Arnold, that Tolstoy’s novel has ‘many characters…too many’ – but dismisses this as a misreading. He does the same with James’s contention that this novel lacks ‘composition’ and is ‘defiant of economy and architecture’. Miklós Bánffy’s Transylvanian Trilogy has an elegantly composed structure (more on that later), but perhaps falls short of the kind of greatness Leavis argues is found in Anna Karenina. This is largely because of its defiance of economy and ‘composition’ – it is too long, has too many superfluous characters (I mentioned last time my need to keep a record of names to try to reduce the confusion caused by the huge cast; I counted 23 different names in just two pages of Pt 1 ch. 2), too many digressions and superfluous descriptive passages. 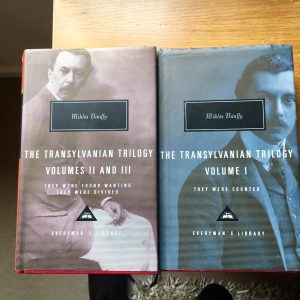 The Trilogy is, nevertheless, almost a great sequence of novels. It’s difficult in the space of this second post on it here to substantiate such a claim, and to give a sense of its overall quality, its (mostly) coherent and subtly controlled narrative – or the defects noted above.

In this post I shall concentrate on vol. 1 of the Trilogy. In the previous post I gave an outline and introduction.

Balint Abady is the protagonist, heir to a vast estate of forests and farmland in Transylvania, in 1904 when the Trilogy opens a region of Hungary (but since the Treaty of Trianon of 1920 part of Romania). The region had a long history of fierce ‘national consciousness’ (Hugh Thomas, quoting Banffy in his Introduction to vol. 1), showing hostility to the Habsburgs and Germany, and, in this Trilogy, towards the Hungarians (an animosity I witnessed in the 1970s when I visited Ceauşescu’s communist state; I even stayed in Cluj, which is the nearest city to the Abady castle of Denestornya at Kolozsvar).

This causes the dissent and arrogantly parochial factionalism that the scenes set in the Hungarian parliament so witheringly portray; the politicians wrangle and orate, oblivious while the empire around them implodes. Abady is Bánffy’s mouthpiece and alter ego, frequently shown despairing at their ‘narrow-minded, prejudiced, dogmatic talk’, which ‘got on his nerves’ (Pt 1 ch. 2), their politically myopic stupidity, their over-fondness for histrionic gestures and violence in the parliamentary chamber, and for their ‘usual rabble-rousing speeches full of slogans’ (Pt 3 ch. 1). He’s shown to be ‘disgusted by the insincerity and triviality of it all’ (Pt 4, ch. 3). A page later there’s this impassioned narrative comment on such divisive, xenophobic scenes:

Such was the general political naivety…that they at once assumed that they were the victims of a conspiracy. They saw enemies everywhere, not realizing that all nations were governed by their own interests and that the skill with which these were grasped and developed was the true basis of a nation’s peace and prosperity. From this distrust of anyone who did not agree with them sprang the divisions within their own ranks… 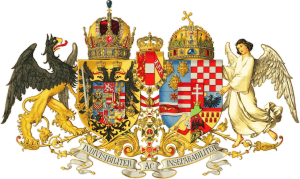 Coat of arms of the Austro-Hungarian empire in 1915: public domain via Wikimedia Commons

The ethnic and regional factions in this parliament preclude any kind of rational debate or consensus politics of the kind Abady advocates, and the ‘kaiserliche und königliche’ dual monarchy is simply despised and dismissed, rather than understood and dealt with diplomatically – Bánffy the politician-diplomat, like Abady, tried and failed to hold these factions together while striving to save his doomed, beloved homeland.

Abady is an interestingly flawed character, however; he’s too innocent and politically naïve to succeed in such a quest. He can’t even manage a rapprochement between the Romanian ethnic peasants of his own estates and villages with their Hungarian overlords. Instead he’s distrusted or exploited by them, and even by the Romanian lawyer Timisan, with whom Abady forms a kind of friendship, but who proves as unreliable in aiding his quest for compromise and progress as the rest.

He’s also not immune from the corruption of this state. He’s elected then re-elected to his constituency of Lelbanya through the habitual use of bribes of the small electorate; he suspects the election was rigged, but acquiesces. He’s only too easily duped by the wily Azbej, the steward of his mother’s estates, and the others whose equally self-interested duplicity is more than a match for his callow rectitude.

His flaws are a feature of his tortured love life, too. He falls deeply in love with Adrienne, who’s married to a sadistic madman who enjoys toying with them. One of my main problems with this Trilogy is with Banffy’s portrayal of women and sex. Abady has had numerous mistresses and conquests in his younger days, most recently with a pretty married aristocrat on a neighbouring estate. The women desired by the men in the trilogy are always beautiful and more or less sensual; we get little sense of their characters or emotional complexity.

Adrienne is more fully rounded in her portrayal than the others, but we know little about her beyond her role in Abady’s relentless campaign to have sex with her. He’s vaguely aware that her reluctance is caused by her being raped by her brutal husband, which has understandably traumatised her, but this doesn’t prevent him from trying initially to use poetic language about the purity of ‘animal nature’ to win her over. She’s too smart to fall for this transparent approach, calling the mating instinct he’s invoked a ‘baited trap, a swindle.’ Instead of showing empathy for her vulnerable state (she’d married Uzdy to get away from a cloying home, only to find herself a different and worse kind of captive, despised by him and his cruel family) and understanding the causes of her sexual prurience, and helping her overcome them with tenderness and emotional maturity, he instead is shown concluding ‘he must feel his way carefully’. She’s his prey, like the animals and birds these male aristocrats love slaughtering in the name of sport.

For weeks and months Abady tries to exercise decency and constraint, despite the voices in him that laugh at his ‘scruples and self-searching’, and which accuse him of behaving ‘more like a timid schoolboy than a grown man of the world.’ So one day when he and Adrienne are lying on cushions on the floor, embracing and kissing, and she speaks of the right of women to have freedom to do with their bodies and thoughts what they liked, despite what society considered moral, he sees this as ‘the moment for which he had been waiting’, when he should ‘press for more.’

He starts his ‘attack’ and tries to force her into having sex, but she springs free, appalled and accusatory. His response is very like that of the abject schoolboy he’d admonished himself as being earlier, but his humility comes too late, his apology is disingenuous and his integrity, to my mind, shattered.

As vol. 1 progresses Adrienne finally overcomes her aversion to sex and they become lovers, but this nasty scene taints the otherwise conventional and romantic-erotic scenes between them that follow.

There’s something too lascivious in the male gaze of the two main romantic heroes, Abady and his cousin Laszlo Gyeroffy (as when Laszlo looks at the ‘voluptuous’ Fanny Beredy, the ‘curves of her body’ barely hidden by her clinging gown – Pt 2 ch. 3), among other sexually predatory men in the Trilogy. Descriptions of men are far more varied and less stereotypically sexual. There’s a scene in which Adrienne is shown ice-skating, and Abady watches her, unseen, transfixed. At first the description is lyrical and rather beautiful, but it becomes more troublesome. Adrienne is compared, in Abady’s focalisation, to ‘a young maenad caught in a magic wintery bacchanalia, a prey to every madness and abandon, drunk with unrestrained desire and ready for whatever the night might bring’. This says more about his lust than her true self. Yes, she’s abandoned to the sensual pleasure of the skating, but the desire is surely all his; she’s objectified. And doesn’t know he’s watching her; it’s voyeurism.

Other women characters are also too often commodified like this and likened to panthers or goddesses or their bodies rhapsodically described, especially when they wear revealing ball gowns. I don’t want to overstate this tendency in the novel; Bánffy is careful to show Abady coming to realise that his attempted assault on Adrienne is no better than her husband’s habitual treatment of her. The way in which the lovely Fanny Beredy – the women are always implausibly sexy and beautiful – uses her sexual allure to distract the heartbroken Laszlo into a passionate affair with her is done more convincingly and subtly than the heavy-handed and chauvinistic campaigns of Abady and most of the other menfolk in these pages. There are also some sympathetically drawn strong and spirited women in the novel, like the independent Sara Bogdan Lazar – but even she falls for the dubiously Byronic and doomed Laszlo.

At one point Laszlo witnesses a distrurbing scene where a butler is about to rape a terrified housemaid; her subsequent pregnancy and disgrace indicate Bánffy’s moral sense, but even so his treatment of these two central male characters and their sexual attitudes isn’t entirely satisfactory.

Already I’ve said too much for one post, and have barely touched the surface of this flawed novel. I’m also aware I’ve been largely critical. The final section of vol. 1 does much to mitigate the unsavoury features I’ve noted above. I’d like to consider the more positive virtues of the Trilogy when I turn to the final two volumes. And I haven’t said enough about some of the fine writing, especially the descriptions of landscapes, and nature in vol. 1; I hope to rectify all this next time.

4 thoughts on “Miklós Bánffy, The Transylvanian Trilogy: post 2, in which I look at vol. 1, ‘They Were Counted’”