everyone loved to hear Louis “The Horse” Lamontagne’s tall tales. Before television, his stories were the best way to pass the time in Rivière-du-Loup.

All the Lamontagne men must marry a woman called Madeleine: the penitent sinner-saint is the icon of the narrative, incarnated several times across the generations, as the name passes down the family’s female line.

The setting is a real town on the St Lawrence River’s south bank in Quebec province. The novel is full of tall tales, anecdotes and stories within stories. It’s a long book – over 600 pages – but never flags, largely because of Dupont’s extraordinary panache in story-telling. All of his characters are full of incident-packed stories of varying authenticity, and they delight in sharing them with each other, often in epistolary form, which adds another potential level of partiality. As Magdalena in Berlin tells the Canadian, Gabriel Lamontagne:

“Canadians love stories. If they didn’t tell them, there wouldn’t be a Canada today.”

A prominent feature is its intertextual, synaesthetic relationship to music, as its title in English suggests; Wittgenstein wrote, ‘Understanding a sentence is much more akin to understanding a theme in music than one may think’. This is a novel that reinterprets, deconstructs and reassembles Tosca (jealousy; obsessive, transgressive passion; suicide), and Puccini’s opera is a leitmotif in the narrative: ‘while ordinary love is cruel, Puccinian love is merciless,’ one character comments near the end.

Other musical works weave in and out of the narrative, from Schubert songs (one is said to be ‘for the cold of heart’) to hymns in church. It’s a novel that engages all the reader’s senses, in a way I can’t recall experiencing before in a literary work, though the epiphanic, transformative, almost mystical influence of heard, performed or imagined music on central characters calls to mind the impact of a lovesong overheard by Gretta Conroy in Joyce’s ‘The Dead’. 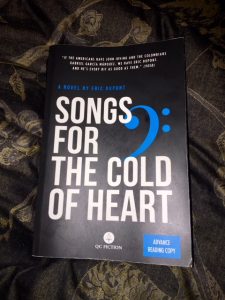 Just as in music, especially opera, there are recurring motifs and themes (foregrounding the way characters replicate or defy their forebears’ personality traits – a postmodern spin on Zola, perhaps): birthmarks in the shape of a bass clef (hence the image on the cover); a painting of the Death (or Entombment) of the Virgin; teal-coloured eyes (many of the Lamontagne family have them, and they’re mesmeric, ‘achingly beautiful’); a lost gold cross fatefully inscribed with its owner’s initials; anorexic opera singers; sugar as a murder weapon; arrows that find unaimed-for targets across the space of continents and time.

Names of people and places reappear in different languages as significant echoes, for language is a medium of communication and separation: Magdalena Berg in Berlin is a German equivalent of Canadian Madeleine Lamontagne; Montreal is Königsberg. An aphorism from Hannah Arendt about victims and executioners acts as a summary of 20C horrors, and as a haunting refrain to this novel. Dupont is too subtle and innovative a writer just to iterate such symmetries for the sake of pleasing design; each recurrence resonates in a cunningly different way, wrong-footing and intriguing the reader, and springing further surprises. He’s a consummate, exuberant storyteller who, like all the great ones, from Chaucer and Cervantes to Borges, employs symbolic, traditional stories to tell profound truths about the human condition.

Dupont has been called a magical realist; I prefer to think of him as an illusionist – which is, after all, what all artists are. So there’s ‘A dead woman acting as a welcoming committee for a funeral home’: old Ma Lamontagne, ‘the grandmother who just won’t die’, but who died in 1933, just as Hitler became Chancellor (the novel is punctuated by momentous historical events). She continues to function for several more decades, until she leaves to join a community of nuns of equally liminal mortality. In the world of this novel this ‘living death’ is no stranger than anything else that’s narrated here or in any work of fiction. It’s a story with its own internal logic. ‘Who better to reassure a grieving family than someone who had passed to the other side herself?’ our narrator blithely, ingenuously asks – and this seems perfectly reasonable.

It’s invidious to try to summarise the plot: it spans much of the twentieth century, and takes in the traumas of two world wars: Dachau, the Russian incursion into Nazi East Prussia and Germany and the exodus and desperate plight of refugees ahead of them; the modern era of fast-food restaurants and TV celebrity journalists. It’s set in Quebec province, New York City, Berlin, Rome and elsewhere, for each character is on a quest away from the tedium of home in search of fulfilment, and many of them need to find each other to answer their existential questions. The final scenes round things off in ways that take the breath away, and show that every sentence that’s filled the previous 600 pages is an essential, meticulously placed element in the overall structure.

I’ll finish by showing that Dupont isn’t just a novelist who enthrals with narrative virtuosity (which he does); he turns out some beautiful prose; this is Solange, who’s secretly in love with her neighbour, Madeleine, the little girl at the novel’s opening now grown up – their story is at the heart of the novel – and they’re waiting to change buses en route from Canada to New York where Madeleine intends to abort the child whose father’s identity is one of the many mysteries of the novel. Madeleine has confided to her friend that she’s tired and scared; asked what of, she replies: ‘“Of finding myself all alone without you.”’

Upon hearing those words, Solange felt the bones in her ribcage open and a vibration that first stirred in her perineum ran up right through her, rocking her very foundations and rising up heavenward and through her lungs, pharynx, vocal cords, and nasal cavities to leave the back of her head trembling. The sound she produced was pure and clear, carried forth by the words “I will never leave you,” which resounded through the bus station the way the song of an angel will one day burst forth into the world God promised to his followers. It could well have been the moment, in all her life, that Solange was at her most lucid, her most beautiful too.

This novel warms the heart.

I can’t finish without a word of praise to the translator. Peter McCambridge has produced that rarity — a translation that doesn’t sound like one.

Thanks to the publishers for sending an ARC.

Other QC titles I’ve discussed before are:

The story collection I Never Talk About It: posts here and here

Mélissa Verreault, Behind the Eyes We Meet

18 thoughts on “Puccinian love is merciless: Eric Dupont, Songs for the Cold of Heart”