Our 10-year-old granddaughter is staying with me and Mrs TD for a week. She comes for a stay with us every summer, but this is the first time without her big brother – he’s on a sea cadet camp. “I’ll be a lonely child,” she told us happily. “Don’t you mean only child?” my wife asked. “No,” she said happily; “lonely”. 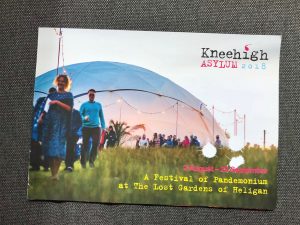 On Wednesday we took her to the afternoon performance of Kneehigh Theatre’s show ‘The Dancing Frog’, based on the children’s story by the gifted illustrator and writer Quentin Blake. It’s directed by Mike Shepherd, one of Kneehigh’s founders. We went last time with her parents to see Ubu Karaoke, which I posted about last week. This show is more suitable for a younger audience, and sure enough there was a row of tots sitting on cushions on the floor just in front of the performing area. They entered into the audience participation moments with gusto – we all did, it was irresistible.

It was typically exuberant, inventive and multi-talented Kneehigh. Elderly Gertrude, played by singing, accordion-playing Tim Dalling (who plays an array of other characters in the show), meets her youthful self (Jenny Beare), and they share memories of her sailor husband (also played by Tim), who drowned at sea (though we get to see some startlingly brief shore leaves before his ship hits an iceberg). Heartbroken, Gertrude stands by the river, feeling she can’t live without the love of her life. Like Ophelia, she enters the water, but as she sinks down, a frog swims in front of her and they surface. 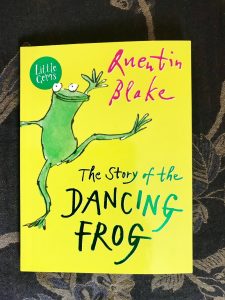 The cover of Quentin Blake’s book

Then the frog dances for her. Entranced, Gertrude takes him home. He loves to dance to the music on her record player. Soon he’s performing on stage, at first in England (he makes his name as a replacement for a talking dog who develops a sore throat and can’t go on stage), and goes on tour all over the world.

We’re treated to cameo performances of his remarkable choreography in all the major world capitals, from flamenco in Spain to Swan Lake in Russia – memorably staged in front of us complete with corps-de-ballet in tutus and an evil villain. George performs a stunning solo.

There’s a heart-stopping scene at the end when George the frog is trapped by a fire on the 13th floor of his New York hotel. Gertrude stands below with a bucket of water: George has to leap into it – will he survive? You’ll have to go the show to find out! 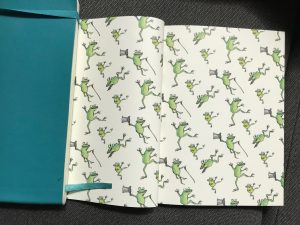 Blake’s illustrations on the book’s inside front cover 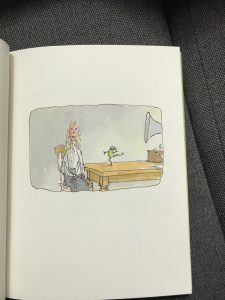 It’s an absolutely delightful piece of imaginative theatre. The puppet frog (who looks just like drawings in Blake’s book) is handled by Alisa Dalling. Although she’s more or less holding him to make him move and dance, we quickly forgot her presence and believed entirely that this cheerful green creature was a living, worm-chomping amphibian who saved Gertrude from grief, and charmed all who saw him (apart from a nasty landlady and some rascally theatre folk who wanted to lock George up and force him to perform without Gertrude’s protection and love).

George and Gertrude have to get through some difficult and even dangerous times, then, reinforcing the heartwarming moral of this lovely story. The book has a frame narrative omitted in this dramatisation. Young Jo asks her mother for a story, and this is the tale she tells. When it’s finished, Jo asks if it was true, for frogs don’t normally dance, and nobody could catch one and make it perform on stage; her mother replies

‘You can do all kinds of things if you need to enough’.

The story is told with bracing vigour, humour, pathos and panache, with perfectly chosen music and songs (some original and cleverly pertinent to the plot and characters), dance and mime. There’s particularly clever use of props, like aeroplanes, butterflies, the husband’s ship (and that nasty iceberg) – and even the flames of the fire.

We all agreed afterwards that we’d enjoyed the show immensely, and completely suspended our disbelief. I’d highly recommend you go and see this terrifically entertaining show if you get the chance – or read the book if you can’t.