Having just been to Mallorca and read Lydie Salvayre’s Cry, Mother Spain, a novel about the impact of the Spanish Civil War on rural families in Catalonia (and parallel descriptions by Bernanos of atrocities perpetrated in Mallorca by fascist Francoists), about which I posted last week, I needed to reread George Orwell’s contemporary account of his experiences as a militia volunteer in Homage to Catalonia. It’s decades since I first read it, but it remained pretty clear in my memory as a searing, sad, highly personal story. 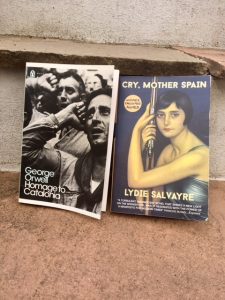 First published in 1938, it describes his experiences in Spain from December 1936, soon after the war broke out, to June 1937. He’d served at the Aragón front, where to his frustration ‘little or nothing happened’, having spent the first weeks in desultory training in the Lenin Barracks, Barcelona, then recuperating in horribly ill-equipped and inexpertly staffed medical facilities after being shot in the throat.

On leave in Barcelona in May ’37 he found that bourgeois class distinctions had returned and the revolutionary idyll had ended. He also found himself caught up in internecine street fighting instigated by the communist assault on the trade-union controlled Telephone Exchange, which resulted not surprisingly in an armed response from the non-Stalinist leftists. The loosely Trotskyist POUM militia (Partido Obrero de Unificación Marxista), to which Orwell had been assigned, naively unaware of the significance of its political allegiance, was anathematised by Moscow’s Comintern as traitors in the pay of the fascists, and hence a divisive and fatally distracting crisis ensued, probably enabling Franco’s forces to prevail while his opponents fought each other. It was an only too familiar leftist splintering and infighting that produced his enduring hatred of the Stalinist hard line with its intolerance of anything other than one-nation revolution and unwavering party loyalty, that he later satirised in 1984 and Animal Farm, and was to criticise in much of his non-fiction.

In his 1989 introduction to this PMC paperback edition Julian Symons rather harshly suggests that Orwell combined a ‘capacity for subtle and complex thought and argument with a sometimes tactless ardour and simplicity.’

Orwell got to Spain under the auspices of the British Independent Labour Party, (and, as he later learned to his cost, links with the largely Trotskyist POUM militia), whose recommendation took him to the revolutionary hotbed of Barcelona (setting of the key testing ground for the anarchist fervour of the two idealistic siblings in Salvayre’s novel), which was still under the control of the anarchists and anarcho-syndicalists, rather than to Madrid, where the struggle against the fascists was led by the Soviet-supported communists.

Orwell was surprised and ingenuously delighted to find ‘one breathed the air of equality’ in a classless Catalonian capital, ‘where the working class was in the saddle.’ Symons isn’t far wrong when he describes the ‘romantic puritan’ Orwell’s reaction as ‘childlike wonder’. Who can blame him. Salvayre’s José was also delirious with excitement at what seemed the Spanish utopia: a truly classless society.

But the euphoria was partial and short-lived. Orwell quickly realised there was something ‘pathetic in the literalness with which these idealistic Spaniards took the hackneyed phrases of revolution.’ Like José, he became disillusioned with the endemic lack of organisation , urgency or discipline in the militia (the ‘mañana’ mentality), largely peasant and urban trade unionist men with little military aptitude, and an average age of about twenty, with many as young as fifteen: ‘we were not real soldiers’.

Life at the front, and his experience of war, was far from romantic or heroic; weapons were scarce, antiquated and more dangerous to the users than to the enemy. He rarely got to fire his decrepit rifle. ‘Above all it meant mud, lice, hunger and cold.’ He caustically lists, in decreasing order of importance, the five key things in the warfare he experienced: ‘firewood, food, tobacco, candles and the enemy.’ He notes the things only a person who’d been there could know, like the fact that ‘At the front, everyone stole’. So much for class solidarity. Even idealistic revolutionaries, he implies, are ultimately venal, materialistic and corrupt.

The story of the communist purge of ‘undesirable elements’, meaning those who’d fought so bravely with Orwell at the front, including his own brave and selfless commander, and the POUM leader Andreu Nin, who disappeared, were tortured to death or allowed to die from neglect in prison by the communists, disgusted him. Yet I think he’s honest when he insists this book is not ‘a book of propaganda’ and that he does not intend to ‘idealize the POUM militia.’

As I noted in my post on Salvayre’s semi-fictional account of the war in Catalonia, there are timely references to the use of media and other propagandist modes of manipulation of opinion; in Orwell’s case this includes his scathing criticism of the blatantly biased reporting in the European press, either pro-Franco from such right-wing papers as the British Daily Mail (which continues to produce xenophobic, counterfactual ‘news’, in a manner encouraged and endorsed by the so-called alt right), or pro-Moscow in the leftist press.

This is not a dry, political or even socio-historical treatise, though it doesn’t flinch from exploring such aspects of the complexities of this terrible war – that ‘appalling disaster’ he calls it near the end. There are numerous touches that reveal the flawed and only too human personality of the writer, who ruefully acknowledges that he played ‘so ineffectual a part’ in the war. He admits that when he was frightened in combat he didn’t function well as a soldier, or became so infuriated at the factionalism that, like José, he lost patience with those around him, revealing perhaps unwittingly his upper-class, Eton-educated origins, which he rejected but couldn’t entirely transcend.

But it’s that bitterness about what could have been that lingers: those heady days in ‘equalitarian’, classless Barcelona, that so quickly reverted to the normal hierarchies of rich and poor. We still endure that legacy of power wielded by the power elites, who increasingly denounce, as the commissars did in Spain, any deviation from their truth, as fake news and, most cynical of all, unpatriotic.

Ken Loach’s 1995 film ‘Land and Freedom’ depicts the experiences of a young working-class Liverpudlian man fighting in a POUM unit and undergoing a similar process to Orwell’s of elation followed by disillusionment.

My thanks to Jacqui for her comment to my post on Salvayre, pointing out this piece on the novel by Naomi at The Writes of Woman blog.