For the past two years I’ve made a visit to Plymouth in memory of my old friend Mike Flay, who died in May 2016. We used to meet a few times a year there and talk about books, football, family, education.

Here’s a link to the two previous posts, each of which has photos of the zones we frequented in the city, bombed heavily during WWII because of the Devonport naval shipyard – still a military base. The brutalist reconstruction has not been entirely picturesque, but the waterfront is still lovely. 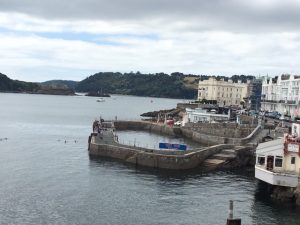 The Waterfront restaurant bar from the Hoe. Kids were having great fun jumping from the harbour wall into the sea.

The last two years I went in July. This summer I’ve been away in Mallorca and otherwise engaged, so this year’s sad pilgrimage is a month later than usual.

I did my usual dérive along the commercial bleakness of Armada Way and on to the Hoe. No bowls match in progress this time – locals nor ghostly Drake awaiting the Spanish Armada. 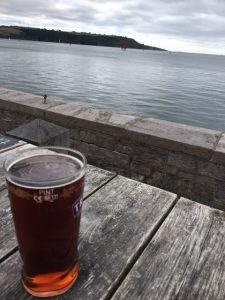 The customary pint of local brew ‘Jail Ale’ (named presumably for the famous Dartmoor Prison nearby) at the Waterside bar we used to patronise – where Mike would always have a burger, having started his journey earlier than me.

No Brittany ferry passed by this time, either. A gaggle of Italian school kids perched on the wall nearby, legs dangling over the water, trying to look cool and largely succeeding, as Italian kids do.

The attractively restored Tinside Lido, when I walked on, was much busier than last time. The sun had finally emerged after a rare cloudy start to the day; it’s been an unseasonably hot, dry summer in the west country, where we usually get more than our fair share of rain, even in summer. Now the fields look parched and brown – an unusual sight in this green land.

On to the ‘colonial hotel’, as Mike called the Copthorne, close to the station. He was thinking of Conrad, though the comparison was ironic, for there’s not much of the Far Eastern exotic about it. A business couple talked earnestly about mortgages and financial deals. The young woman serving at the bar wore a name badge: Jelena. She’s one of so many who will unfortunately find Britain less congenial after the Brexit negotiations finally come to their dreary end. Not our finest time.

The doors to the hotel are now locked and one has to press a button to gain access after speaking through an intercom. The bar now calls itself a ‘Brasserie’ – an unconvincing development. The toilets are also locked and it’s necessary to get a code number from the bar staff in order to get in there. Clearly the proprietors are expecting invasion of some kind.

The layout of the lounge had changed, and the customary Sky News on the TV is now playing on a side wall, on a much bigger screen. Sports news was on: football transfer news (Mike would have enjoyed that, and grumbled about the state of Man Utd), cricket.

As I sped back through Cornwall on the train home I felt the usual pained sadness of loss. The usual doubts about these trips: but I’m sure they’re not a wallow – they’re a celebration of his life.