Anthony Trollope, The Last Chronicle of Barset. First published by George Smith (of Smith, Elder & co.) in 32 monthly parts, each one with an illustration by George H. Thomas, 1866-67; 2-vol. edition 1867 (there’s a feature on these images at the Trollope Jupiter blog HERE; the Jimandellen blog has a detailed account with reproductions HERE) 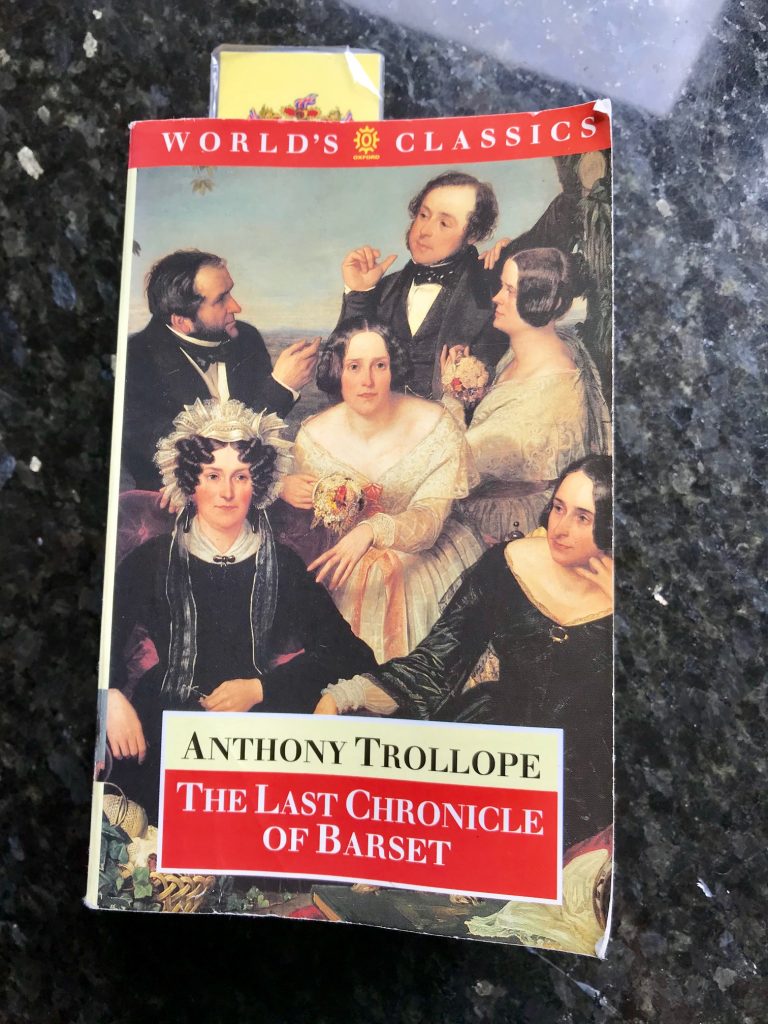 In this sixth and final Barsetshire novel (I’ve posted on the previous five earlier this year) Trollope reworks some familiar themes from the previous volumes, especially the central feature – the threat to rural-pastoral peace from metropolitan and other destabilising agents. This is achieved when in the final chapters the troubled and penniless Rev. Crawley replaces Harding in the role of vicar of St Ewold’s, which the former warden of Hiram’s Hospital took on when he resigned that post as a matter of honour and morality in the first novel in the chronicles: The Warden. He is thereby accepted fully for the first time as a ‘gentleman’ into the contemporary Barsetshire clerical circle, while symbolically inheriting from the saintly Harding the role of guardian of its traditional moral values. He’ll fulfil that role with less charm and self-effacing grace than his predecessor, but with the stern asceticism of St Simeon Stylites – with whom he’s overtly compared in Ch. 41, when he pushes himself to physical and mental breaking point in his parochial duties as a way of atoning for his failings (he’d been charged with the theft of a £20 cheque):

Trollope has become a skilled and often subtle narrator of these otherwise rather creaky and glacially-paced plots – the mystery of the provenance of Crawley’s cheque isn’t resolved until p. 757 of this 900-page novel, largely because the person who could have cleared his name is conveniently out of the country and incommunicado. Those looping verbal repetitions (in the quotation above) demonstrate Crawley’s tendency symbolically to flagellate himself in order to show how he can outdo the world in inflicting pain and suffering on himself, while railing at the world’s failure to esteem him. This tendency has been largely responsible for the frequently-expressed view in his community that he’s prickly, proud and obsessive to the point of insanity (young Lord Lufton, a key character from earlier volumes in the series, calls him a ‘poor, cracked, crazy creature’). His bizarre forgetting where he obtained that cheque is typical of his manic, half-mad eccentricity and morose self-absorption. His self-pity at the ‘trials’ of poverty he suffers as a member of the ‘poor gentry’ verges on the monstrous, especially in his overbearing, patriarchal treatment of his children and his indulgent wife, whose love and devotion to him never falters, even when he’s at his most high-handed and bitter. Indeed, Mrs Crawley, who ‘saw clearly the workings of his mind’, perceives that he was

good and yet weak, that he was afflicted by false pride and supported by true pride, that his intellect was still very bright, yet so dismally obscured on many sides as almost to justify people in saying that he was mad. She knew that he was almost a saint, and yet almost a castaway through vanity and hatred of those above him.

This astute insight into her husband’s grotesquely conflicted, flawed character from one of Trollope’s typically wise, sympathetic mature women is again highlighted by that telling use of repetition and the symmetrical balancing of synonyms with their antonyms, enhanced by the spot-on rhythm, imagery and cadence of the sentences.

This narrative skill changes up a gear in the next sentence:

But she did not know that he knew all this of himself also.

She does not comprehend that he castigates himself constantly with the knowledge that people ‘were calling him mad and were so calling him with truth’, and neither does she ‘dream’ that ‘he was always inquiring of himself whether he was not mad’, and should therefore resign his pastoral office.

Even as shrewd an observer of this difficult man’s complex nature as his wife is surpassed by our narrator in psychological perspicacity – and all of this conveyed with a subtlety and sympathy that in other Victorian novelists would be praised as genius. 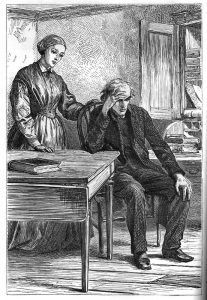 Image above of the Crawleys at the Victorian Web Here:

This bleak and imposing design is Thomas’s first illustration and establishes the anguished tone of the Crawleys’ narrative. Though modelled on Millais’s earlier design for Framley Parsonage, it shows the reverend and his wife in later years; both have aged and their economic circumstances have declined from poverty into penury. The glum ambience is powerfully conveyed by the worried gestures and glances and the emptiness of the room suggests both material poverty and the emptiness of anxiety. [Simon Cooke, cited above]

This is a superb ending to the Barsetshire novels. The three sub-plots are less satisfying than that of the public humiliation and redemption of Crawley: Trollope’s lack of sustained interest in romantic plots is apparent in his recycling of the doomed Lily Dale-Johnny Eames affair from the previous novel – he even gives Eames another foolish and dangerous romantic London dalliance to take his mind of his humiliating, dogged pursuit of annoying country belle Lily. Trollope also returns to his staple plot of a spirited son’s defiance of parental disapproval of his choice of wife whose lowly social-financial status is their main concern (Henry Grantly and Crawley’s daughter Grace). The other London plot involving a society artist’s flirtation with a woman married to a dodgy city ‘financier’ (usurer/loan-shark) is more lively and exciting, but skirts close to farce towards its end – as the Johnny Eames flirtation plot does.

What lingers in the memory after finishing this fine, uneven novel is the portrayal of noble, heroic, infuriating Crawley, wallowing in self-pity and rancour, spurning the kind offers of aid from his loving friends and family, but capable of facing down the bullying of Mrs Proudie, and of providing genuine support and comfort to the oppressed brickmakers and their families who live in his impoverished parish.

Good to see the indomitable Miss Dunstable, now Mrs Thorne, reappear and provide moral sustenance for faltering lovers – though even she’s incapable of enlightening the ‘morbid’ tenacity of Lily’s infatuation with the scoundrel Crosbie.

6 thoughts on “Anthony Trollope: The Last Chronicle of Barset”