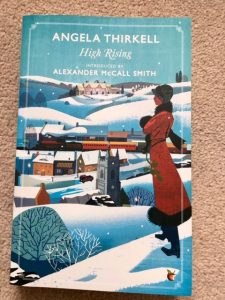 Angela Thirkell was quite someone: a granddaughter of the Pre-Raphaelite artist Burne-Jones and goddaughter of JM Barrie, her father was Professor of Poetry at Oxford, and she was related to Kipling and British Prime Minister Stanley Baldwin. Like her enterprising protagonist Laura in her second novel High Rising, she took to writing potboiler-middlebrow ‘rather good bad books’ about which she has ‘no illusions’ as to their literary merit, to make a living when left alone in the world:

She had considered the question carefully, and decided that, next to racing and murder, and sport, the great reading public of England (female section) likes to read about clothes.

There’s a character in this novel who reluctantly shows Laura’s publisher her novel; Laura is relieved to find she’s one of those ‘rotten’ writers who knew they couldn’t write’ – a typically self-deprecating reference that surely applies to Thirkell herself.

So Laura churns out, as often as Thirkell did, frothy romances set in the world of fashion, ‘opium’ as a friend and fan of Laura’s describes the experience of reading them. Laura is slightly embarrassed to add to the pile of what would now be derisively known as chick-lit, but happy to cash the royalties cheques. She’s level-headed, a realist who’s learned to exploit her own limited talent and the even more limited tastes of her target market. (Elizabeth Taylor does a much more witty, interesting and sophisticated job on this in Angel.)

Unlike Laura, whose husband had died (though she says he was an expensive nuisance when alive), Thirkell left her second husband; her first she divorced on the grounds of adultery. Men tend refreshingly to be portrayed as the weaker sex in this novel, and it’s the spirited, sensible women like Laura who win through – ‘excellent’ women, to borrow Barbara Pym’s phrase – a writer to whom Thirkell is often compared, but who is a far sharper, more accomplished artist.

I won’t summarise the rather predictable but amusing plot – links to other bloggers’ posts at the end supply outlines. I’ll just single out the few points that amused me in this undemanding, often saccharine entertainment. It’s ideal for a rainy day or sickbed – a guilty escapist pleasure that was a bit too much for Karen of BookerTalk, who likened it to an indigestible ‘meringue’. She craved something edgier and saltier. I know what she means, but I (mostly) enjoyed this novel. I didn’t care for the casual anti-Semitism; it’s not sufficient to put it down to the opinions of the period. Look what was going on in Germany in 1933.

Thirkell set these comedies in Trollope’s Barsetshire – a feature that appealed to me, as my recent Barsetshire posts indicate. She’s not in his league, of course, but wouldn’t claim to be.

Laura’s young son Tony divides critical opinion: to some he’s a charming, precocious chatterbox; I’m with those who found him irritating, with his obsession with trains and the patrician manners his private school encourages. But he reminded me of my grandson when he was that age. Now he’s scared of trains. Existential pre-teen angst has replaced innocent pleasure. Tony will probably become Transport Minister in a Tory government and close unprofitable country lines like the one passing through High Rising.

I preferred Laura’s cheerful maternal doting on him mixed with prevalent hatred. On several occasions she could happily kill him, our narrator tells us. She contemplates writing a book: ‘Why I Hate My Children’. Reminds me of the recent bestseller ‘Why Mummy Drinks’.

There’s a weird section in Ch. 9 just like passages in Cold Comfort Farm (published the year before, in 1932): Laura sees a handsome, swarthy rider in Hyde Park:

Rather DH Lawrence-ish, thought Laura vaguely. The sort of person who would turn into a half-caste Indian, full of black, primal secret something-or-other, and subjugate his mate.

Her reverie is ended when this hunky vision speaks in an accent so ‘healthily Cockney that the lure of the he-man vanished.’ The pastiche is almost as good as Stella Gibbons’.

There’s a well done car crash (no one is hurt) when Laura’s publisher gets drunk at a New Year party (as publishers do) and drives her home. The aftermath is a good example of Thirkell making an entertaining meal of unlikely material. The car ends on its roof, with Adrian jammed under the steering wheel, and Laura on top of him. She’s livid.

‘[The door]’s stuck, of course,’ she said coldly. ‘Do we spend the night here? It may be respectable, in view of the limited opportunities, but it’s not my idea of comfort.

Adrian manages to get out:

‘How can I get out of a small window above my head, you soft gobbin,’ said Laura angrily. ‘I’ll never take you to a party again.’

The dressing-down she gives him when they get to her house is classic.

Farcical-theatrical set pieces like this just about redeem a lively but uneven, limited comic novel. They could easily feature in those screwball-women films of the period starring actors like Claudette Colbert.