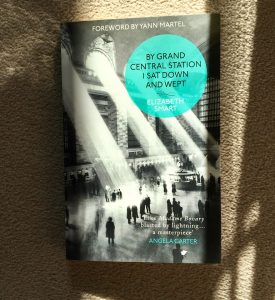 The title is of course an allusion to the lament of the Jewish people in exile in the first line of Psalm 137. In this prose poem novella – it’s only 134 pages, with plenty of white spaces – Canadian Elizabeth Smart (1913-86) creates something close to a collage of delirious references to amour fou from the Bible, especially the Song of Songs, myths and legends from ancient Greek and Latin sources (the narrator likens herself to no end of romantic heroines, from Cleopatra to Helen of Troy, Leda to Venus). Also in the mix are recurring references to the 15C English lyric also inspired by the Song of Songs, and known for its Latin refrain:

I am dying for love. This is the language of love.

(See Clerk of Oxford blog for the text and modern version.)

What is it men in women do require?

The lineaments of Gratified Desire.

What is it women do in men require?

The lineaments of Gratified Desire

A few pages later, as the lover seems to have left her to return to his wife, the narrator spins into a near-suicidal downward spiral of inconsolable longing and depression:

The hopelessness of her longing – for the lover, and for ‘ease’ – is savagely embodied in that cold reference in the final four words to her unborn child: she’s pregnant by the lover, and is doomed to give birth alone. (Smart went on to bear three more of Barker’s children; he also fathered eleven more with three different women. Makes me wonder whether he merited her fierce love, or appreciated its ferocity.)

I know these days are offering me only murder for my future.

But he never passes anywhere near me without every drop of my blood springing to attention. My mind may reason that the tenseness only registers neutrality, but my heart knows no true neutrality was ever so full of passion.

He’s a shadowy figure in the narrative, and appears in the opening pages, ominously, accompanied by his wife.

It’s well known that Grand Central was based on Smart’s pursuit of the English poet George Barker – she fell in love with him through reading some of his poetry in a bookshop in England in 1937. Three years later, after a patient, amorous campaign, aided by Lawrence Durrell, and a lengthy correspondence with the object of her desire, she paid for Barker and his wife to leave Japan, where he was unhappily teaching, and fly to California. They set up a bizarre ménage à trois.

As in real life, the novella depicts the woman following her lover from Monterey to Europe and war-scarred England. There’s a painful interlude alone in Canada, where her parents are scathingly judgemental of what they perceive as her crazy infatuation.

In Part 4, for example, appears the most hilarious and oddly moving of these jarring dichotomies of register. She and the lover had been arrested at the border of Arizona on charges of moral turpitude. Extra-marital sex was (and still is, apparently) a crime. The crude, cruel questions from the leering cops are intercut with soaring verses from that same Song. Not only is this section very comical, bordering on farce, it movingly portrays the woman’s resolution to preserve inside herself her treasured holy passion, even when threatened and bullied by the agents of the secular unromantic state. From her jail cell she fumes:

The eyes of the jealous world peer through the peephole in the door, in the eyes of the keeper. But still the only torture is [the lover’s] absence. (p.45)

Taunted and berated for her illicit love by her interrogators, she returns to her justifying refrain: What do you live for then?

I don’t go for that sort of thing, the officer said, I’m a family man, I belong to the Rotary Club…What a cad [the police inspector] said, and the girl’s a religious maniac.

This is Holden Caulfield’s pompously indignant ‘phoney’ territory – and very funny, because part of her knows it is – but she prefers her crazy love to their mediocrity. And as she says, they’re hypocrites:

But are all Americans virgin and faithful ever after?…The thin-lipped [inspector] was livid with hate of our lineaments of gratified desire [that’s a Blake bombshell lobbed against the philistines again]

Or there’s her landlord, Mr Wurtle, quizzing her on the possibility of the existence of love, her love in particular:

I cannot hear beneath his subtle words the beginning of the world’s antagonism: the hatred of the mediocre for all miracles.

Near the end, the woman now alone and desolate, the novella’s title finally appears, followed by this:

I will not be placated by the mechanical motions of existence, nor find consolation in the solicitude of waiters who notice my devastated face. (p.119)

Even in the extremities of despair she refuses to betray her love. Unlike ‘everyone’, she will not acquiesce or compromise. 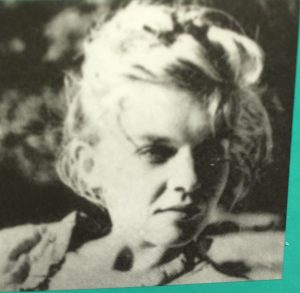 Smart the ‘good-looking blonde’, as the narrator is leeringly called at one point: photo on the back flap

One of my problems on that first reading was a failure to tune in to the subtleties and ironies I’ve just mentioned, and a not very generous inclination to find the woman’s outpourings a little, well, morbid and hysterical – like that whiny ‘They don’t know about us’ pop song – or is it more like the Stranglers’ “La Folie”? Now I notice she’s aware of the potential ridiculousness of her obsession: this is from p. 126, as she continues to voice her attempts not to succumb to despair at being abandoned:

No morbid adolescent ever clutched toward melodramatic conclusion so wildly…Oh yes, it is hysteria that whips me with his name, that drives me with the insane loneliness of the first split amoeba, to shriek beneath his window.

See what I mean? And yet that same quotation shows what still causes me to doubt that this is the masterpiece it’s touted as in the puff quotes on the jacket. The sentences linger just a little too long, engendering more sentences that veer off into surreal imagery that’s often reminiscent of the weaker, more self-indulgent, obscure parts of Dylan lyrics (compare this on p. 28: ‘The parchment philosopher has no traffic with the night, and no conception of the price of love. With smoky circles of thought he tries to combat the fog and with anagrams to defeat anatomy’), or the amphetamine-flow of the Beats. Sometimes she sounds like Sylvia Plath on a bad day, or Whitman on a good one.

Then a few paragraphs later she refers to her inner cradle – I think she means her capacity for consoling herself and her unborn child? – like this:

It buffets me off the road of planned elegance. Girls in love, remember to keep your heads, keep calm, plan your campaign, yours sincerely, Dorothy Dix. Girls in love, be harlots, it hurts less.

(Had to Google D. Dix: seems she was a famous agony aunt.) That first sentence is terrific, wittily self-aware, brilliantly showing the indomitable spirit that’s never quite extinguished among the vicissitudes of the dingy cafés she frequents, as well as her habit of solipsistic wallowing. Maybe it’s just impossible not to sound like a hysterical adolescent when expressing transcendent love for a bastard. Angela Carter certainly disapproved, preferring in this situation to cut his balls off, not weep.

When I started drafting this piece I thought it was going to be a demolition job. It’s turned into something much more appreciative. I still think the book is flawed, but it’s an extraordinary piece of prose, and I’d be interested to hear what others who’ve read it thought of it.

Apologies: I had no idea this post would turn out so long. Maybe the book is better than I think.

24 thoughts on “Elizabeth Smart, By Grand Central Station I Sat Down and Wept”